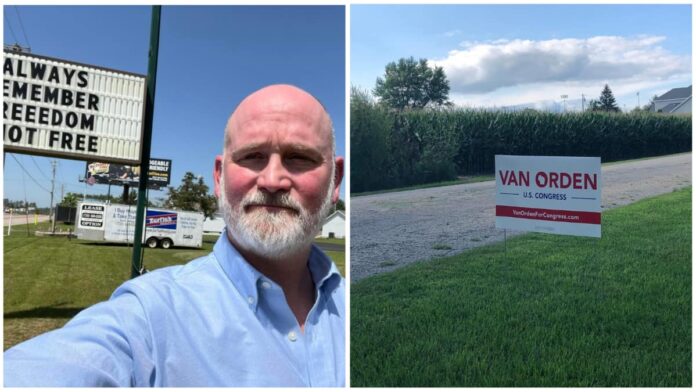 “We are dedicated to putting in the work to bring back the Freedom, Prosperity, and Safety that has been lost under the last 2 years of unchecked Democratic rule. America is worth the work” – Derrick Van Orden

Former Navy SEAL Derrick Van Orden is running one of the best campaigns in the country, and this poll proves it. Van Orden, a Republican, is up 13 points in a long-time Democratic district.

It’s the western Wisconsin congressional district that elected Democrat Ron Kind since 1997. Kind announced he was not running for re-election after squeaking out a razor-thin win against Van Orden last time (Trump won the district by 5). Fox News has rated the district one of the top 10 most likely to flip Republican in the country.

Van Orden, who has been working hard reaching out to voters in the district for years now, has quite a resume; he retired as a Navy SEAL Senior Chief with 5 combat deployments, including to Iraq and Afghanistan, and others to “troubled areas in the world,” his campaign bio says.

• With a large edge in both name identification and favorability, Derrick Van Orden is able to
expand his lead beyond that of the generic ballot advantage for a Republican.
• In this heavily blue-collar district, Van Orden leads by 20% among working-class voters.
• Just 12% of voters are undecided

Politico described the poll as an internal GOP survey by Cygnal for the Congressional Leadership Fund. According to Politico, the race is one in which Democrat House seats could be flipped in the midterms; Van Orden has a large cash advantage.

We asked Van Orden about the polling numbers. “This poll reflects what we have been hearing during our hundreds of meetings conducted over the tens of thousands of miles we have driven throughout the district,” he said.

“People are fed up with the results of 2 years of unchecked Democratic Party power under the leadership of Joe Biden and Nancy Pelosi. They are fed up with the radical socialist spending that has led to the highest inflation in 40 years making it difficult to fill up a gas tank and a grocery cart on the same day.

They are fed up with the crime wave that is sweeping the country because of the Democratic Party’s Defund the Police movement. They are fed up with Biden’s open borders that have led to the death of 100,000 Americans from fentanyl overdose. And they are disgusted with the fact that Biden abandoned thousands of American citizens to terrorists and never apologized.

We are dedicated to putting in the work to bring back the Freedom, Prosperity, and Safety that has been lost under the last 2 years of unchecked Democratic rule. America is worth the work.”