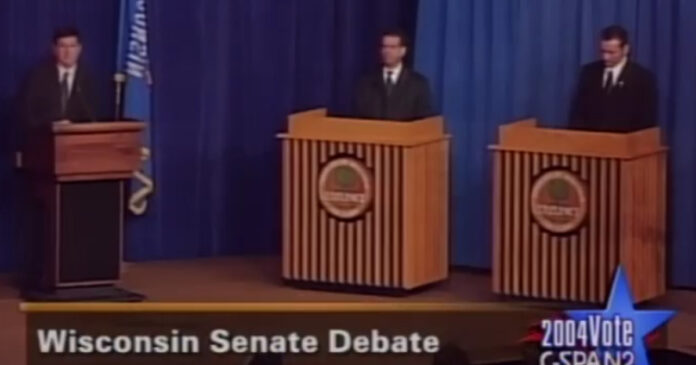 The left is so worried about Tony Evers losing that they are dredging up comments Tim Michels made in 2004, and misleadingly omitting the fact that many politicians held the same position then, including President Joe Biden.

The attack ad takes a small piece of a comment Michels made in a 2004 debate on gay marriage to imply he doesn’t want gay people to be open in public. The ad misleadingly leaves out a line in which Michels said, “Every American, regardless of skin color, religious preference or sexual orientation deserves to be treated as an American.” It ignores the full context of Michels’ 2004 remark, which was really opposition to gay marriage at a time that many politicians, including top Democrats, also held that position.

The ad accuses Michels of being a “divisive radical,” but, back then, Joe Biden said a lot of similar things, which the ad does not note.

The snippet of a quote came from the Oct. 16, 2004 Senate Debate at the Western Wisconsin Press Club.

Audience question from Travis Welke, Eau Claire: How will each of you protect the rights of gay and lesbian Wisconsin residents?

Here is what Michels said, in full: “Every American, regardless of skin color, religious preference or sexual orientation deserves to be treated as an American. But I think when you bring it out of your house and onto the public street, that’s where I differ. I believe in family values, I believe in traditional family values and if necessary I’ll support a constitutional amendment that will keep marriage between a man and a woman. It’s been that way for thousands of years, and I believe the sanctity of marriage is worth protecting.”

Of course, the ad ignores the part “deserves to be treated as an American.” As for Michels’ stance on gay marriage in 2004, consider:

Biden over the years:

Michels was pressed on whether he still supports gay marriage by Milwaukee Journal Sentinel reporter Molly Beck. That interview came in June.

Here is what he said in full:

Tim Michels: “I believe that marriage should be between a man and a woman.”

Molly Beck: “Okay, would you support banning it? If that came up in the legislature? Or nationally?” (Our note: This is a dumb comment because the U.S. Supreme Court has made it impossible to ban gay marriage.)

After that article, the Michels’ campaign put out this response;

“Let me be perfectly clear. I did not focus on the issue of same-sex marriage, an issue settled seven years ago by the United States Supreme Court. I responded to two different reporters who bizarrely brought up this issue on the same day. Why is this an issue for them? Ask them. Here are my concerns:

And one reporter for a statewide news service and another for the state’s largest newspaper asked me if I would sign a hypothetical piece of legislation that would somehow magically undo a seven-year-old Supreme Court decision.

This is the same media that bemoans the cost of campaigns and candidates’ reliance on paid media to talk about the issues that matter to voters.

My faith and my life experiences as a businessman and a father all contribute to my beliefs and how I make decisions. But I do not impose my faith on others, and would not as governor. My job as governor would be to enforce the law of the land, and that is what I would do.”