Trump’s Thrashing of Kleefisch & Her Family Was Disgusting 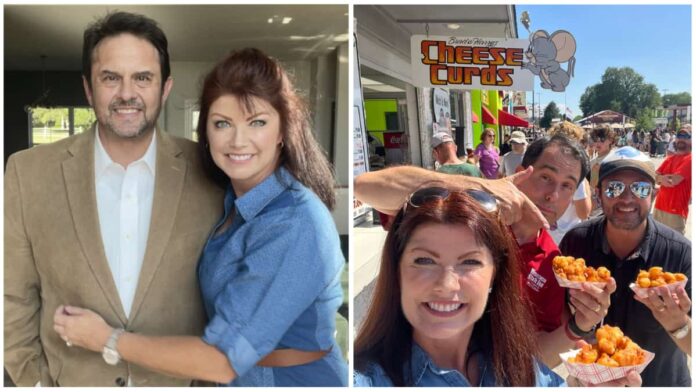 We have been supporters of former President Donald Trump. Between us, we voted for him 5 times. However, we found Trump’s thrashing of Republican gubernatorial candidate Rebecca Kleefisch and her husband in Waukesha, Wisconsin, on Friday to be unnecessary, unhelpful, and, frankly, disgusting.

If Tim Michels wins the primary, he will need the conservative base to unite. How does this help? Trump treated Rebecca and Joel Kleefisch like they’re screaming liberals; he did everything but give them a nickname. But they’re not. They’re hard-working grassroots conservatives.

Even if you prefer Michels over Kleefisch in Tuesday’s primary, every conservative should be able to see that this was simply wrong. Trump said he didn’t think Kleefisch could be Evers, even though the only recent poll showed she was closer against Evers than Michels. Either way, he should be saying either one of them could win. Way to rally the troops!

What President Trump did tonight was disgusting and inexcusable. Shame on him. He flew into our state to smear Republicans who have worked very hard to advance the conservative cause. And then flew back out. He spent more time on Joel Kleefisch than Tony Evers.

We find it interesting that Trump supports Michels, even though Michels didn’t vote for him in the 2016 primary, wouldn’t say in the last debate if he would support his candidacy in 2024, supports manned dropboxes, initially did not want to abolish the Wisconsin Election Commission, and said in the last debate that he would not make decertification a priority.

Meanwhile, Tim Ramthun supporters were forced to either take their Ramthun campaign shirts off or turn them inside out tonight at the rally. But Ramthun is the only candidate campaigning on decertification (we don’t support decertification, but we’re simply pointing out how upside down all of this is).

Kleefisch’s great crime? Being a conservative lieutenant governor for the state’s last Republican governor, a man who was greatly derided by the left over his Act 10 reforms. Her husband’s offense? Working to get pro-life legislation passed to protect Down Syndrome kids.

Maybe this is Kleefisch’s payback for voting for Ted Cruz in the 2016 primary. Well, so did the rest of Wisconsin. At least she voted. You can’t say that about Michels. She also went on a Women for Trump bus rally in 2020.

Meanwhile, Michels and his company have been involved for years in groups that worked aggressively to stop Walker-Kleefisch conservative reforms, like prevailing wage and right-to-work. These groups also fought to raise the gas tax.

It’s fine for Trump to endorse Michels all the same; he clearly likes his outside builder/businessman narrative. And if Michels ends up the nominee, conservatives do need to unite.

However, the broadsides Trump delivered from the stage at the Kleefisches were not OK. We wonder how many other good Republicans Trump has done this to around the country.

Maybe it stands out more here because we know the Kleefisches have been solid conservatives for years here. Michels should repudiate these attacks, but he’s too busy insisting he’s not going negative while running attack ads that push similar untruths.

However, the president has a massive stage. He’s got a big following. He’s the former Leader of the Free World. He should have urged the base to unite against Tony Evers, not divided Republicans more.

What he said was also very unfair.

Trump said Kleefisch’s husband was the “biggest” lobbyist in Madison. In reality, Joel Kleefisch has had a relatively small lobbying practice for four years. Before that he was a Republican legislator. He lobbied for conservative legislation. In addition to the Down Syndrome bill, he pushed for a pro-life bill to force physicians to save the lives of babies born through botched abortions. He lobbied for a pro-gun bill.

The rest of his lobbying was for sportsman groups and hunting causes. We know this because we reviewed each bill. We didn’t find a single non-conservative bill.

For this he is being trashed by the former president of the United States? For pushing pro-life legislation? He lobbied for groups that help the disabled.

Trump attacked Kleefisch for supposedly being “handpicked candidate of the failed establishment.”

She was second-in-command to Scott Walker. Is Trump really calling Scott Walker the “failed establishment”? Is that really what it’s come to?

Trump trashed her for a trade mission she took to China after touting his own good relationship with China’s leader. He said she was “begging” for business. Actually, she went to China on a trade mission to find new export markets for Wisconsin farmers and cheese producers. For example, Wisconsin ginseng is desired there. How is that bad?

He trashed her for being a “career politician.”

Kleefisch was a television reporter before becoming lieutenant governor. As lieutenant governor, she worked to bring jobs to Wisconsin. She worked hard afterwards recruiting and funding local Republican candidates in things like school board races and even inner city Milwaukee Assembly races. We know this because we covered an event in Milwaukee’s central city where she was doing this. Yes, she worked in government – for a Republican governor.

If having served in office inherently earns you the label “political insider” and “career politician,” then doesn’t that now apply to Trump as well?

Trump said the Wisconsin Election Commission was created during the Walker-Kleefisch administration. That’s true. They wanted the elections board to have open partisanship (3 Democrats and 3 Republicans) because the previous board, the GAB, was part of the John Doe targeting Walker and had a bunch of people on it who pretended to be non-partisan but weren’t.

It made sense at the time. Obviously this model didn’t work either because it had weak Republican appointees and aggressive dominating Democratic trial lawyers.