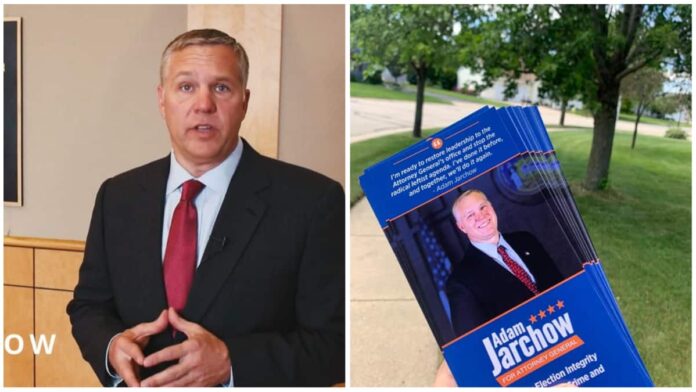 Adam Jarchow began falsely claiming he voted on two “pro-cop” bills – including one that allowed judges to deny more violent offenders bail – after his anti-public safety voting record was criticized.

One of the two bills dealt with a key issue in the Attorney General’s race: Bail reform. It expanded the violent crimes for which a judge could deny bail to include more types of homicide, first-degree sexual assault, and child abuse. As a candidate, Jarchow has stressed the need for bail reform.

In other words, Adam Jarchow is lying to voters about his supposed “pro-cop” legislative voting record in order to create law-and-order credentials after receiving negative news coverage about anti-cop votes. We asked his campaign on Aug. 2 to provide evidence he cast votes that day, Feb. 20, 2018, and they did not respond. As of publication, the claim remained on his website.

It was in the wake of of criticism over anti-public safety votes and comments that Jarchow launched the new pro-cop blitz. Initially, he tried to paint the Attorney General position as not being the “top cop.” Then, Jarchow, who has never prosecuted a case, a started repeatedly claiming that he actually “cast nearly 100 votes in favor of law enforcement-supported legislation” or that “law enforcement groups across our state supported” as a member of the State Assembly.

Jarchow is running against a law-and-order District Attorney, Eric Toney, in the GOP primary on Aug. 9. Toney has been DA of Fond du Lac County for almost 10 years, and he heads the Wisconsin District Attorneys Association. Attorney Karen Mueller is also running.

You can see the video proof of the absence below. Jarchow was excused to leave “for the balance of the day” hours before the two votes. The official record notes if legislators return, we confirmed, but it does not say Jarchow ever returned. He also is listed as absent in all roll call votes throughout the day, including a few minutes before and after the votes were taken on the two bills in question, which were by unanimous consent (meaning there are not roll call votes for them).

Adam Jarchow has repeated this claim in many forums, including directly. “I am proud to back the badge, and that’s why I cast nearly 100 votes in favor of law enforcement-supported legislation as a member of the State Assembly,” Jarchow said in a campaign news release.

The two bills where he was actually absent are listed on his campaign website as: “Would have expanded the definition of violent crime for the purposes of pretrial release, otherwise known as bail (did not pass the Senate) [AB 642]” and “2017 Assembly Bill 825: Extended protections against the bodily harm or threat of bodily harm to certain legal professionals.”

In other words, serious matters.

We accessed the Assembly session video through Wisconsin Eye public access website (which is basically Wisconsin’s version of C-Span).

Jarchow was present for the initial roll call on Feb. 20, 2018, but then he was excused “for the balance of the day.” He represented the 28th Assembly District at the time. We also confirmed that he did not vote on the bills in committee. He also did not claim a per diem or other expenses that day, the Assembly Chief Clerk’s office confirmed.

A House of Cards

Jarchow’s pro-cop list of nearly 100 bills is a house of cards in other ways.

For example, some bills, although they might have earned support from a law enforcement agency or two, probably wouldn’t strike the public as doing much to preserve public safety or being particularly “pro-cop.”

For example, Jarchow included on his list a Democratic bill to reduce the length of time a person’s driver’s license could be suspended. It was sponsored by radical Democrats like Jonathan Brostoff and David Bowen. It received some Republican no votes.

Another bill he included as being pro-cop allowed more inmates to be released; it “allows a probationer who is confined in a county jail or other county facility for a probation violation to participate in Huber release.” Yet another bill limited “who may bid at a sale of foreclosed property.” He included a bill to raise the speed limit.

He included a juvenile corrections bill, too, although he missed one big vote on it and was there for another. Some bills didn’t pass the Assembly but passed the Senate with slight revisions. We gave him those.

He included a bill on mandatory minimums without noting that he joined with a Democrat to successfully push an amendment to limit their reach.

Jarchow did vote yes for some good pro-law enforcement bills, such as those to ban sanctuary cities, create stronger victim intimidation statutes, and making it a crime to repeatedly abuse the same child, among others.

Although conservatives may like it, we’re not sure a bill that he counted – to eliminate a handgun background check waiting period – would be considered pro-cop by some people. However, law enforcement agencies did support it.

However, these findings come on the heels of a lot of other bombastic statements about cops; he once called the Capitol police a “bozo operation,” and he claimed urban police may need reforming. He said in a podcast that he didn’t support passing more felonies in the Legislature in some cases because he thought it would reduce tensions between cops and the community.

Jarchow’s actual legislative record consists of a series of troubling anti-public safety votes in the state Assembly, in addition to some good votes. For example, he joined with a radical Democrat, David Bowen, to limit mandatory minimums for repeat violent gun offenders. He was the only Republican to vote against a bill to make it a felony to assault a prosecutor or cop’s family member for doing their job, in the wake of the Ferguson riots. He wanted to create a political commission to micromanage the state’s police agencies that so troubled then Republican AG Brad Schimel that Schimel warned it would “serve the interests of criminals.”

In contrast, Jarchow has never prosecuted a case. He trashed the state’s largest police association, a bipartisan group that ranked him the 2nd worst legislator one year. That earned him this rebuke from Jim Palmer, the head of the Wisconsin Professional Police Association:

“The fact of the matter is this, prior to jumping into the race to be WI’s top cop,@AdamforAG never really showed any interest in law enforcement issues. That’s why he scored so poorly on the WPPA’s report card, and why he’s misrepresenting that abysmal performance now.”

@AdamforAG’s assertion that the WPPA’s most report card put collective bargaining above other issues is simply incorrect. That report card didn’t include any collective bargaining bills.” Although Palmer’s group has endorsed Democrats, they also endorsed Republicans Brad Schimel and JB Van Hollen for AG, and bipartisan law enforcement support is important to secure a victory in November.

But it’s the absence that’s the most concerning. Let’s go through the evidence in greater detail.

The Journal also notes that a leave of absence was granted to Jarchow, although the video shows the actual terminology used by Rep. Dan Knodl, and repeated by an Assembly leader, was that Jarchow was leaving for the “balance” of the day. It’s not clear why Jarchow left early, although it’s not relevant to the fact he claims he voted when he did not.

Wisconsin Eye carries the video of the more than 7-hour Assembly session that day. Jarchow was a member of the Wisconsin State Assembly from 2018 through January 2019. He lost a reliably red Senate district in a special election (a district carried by Trump and won back by a Republican a short time later.)

The first bill where Jarchow was absent would have expanded the power of courts to revoke the pretrial release of accused criminals for any crime. The second bill made it a felony to intentionally cause or threaten bodily harm against a guardian ad litem, corporation or their families for any action they took int heir official capacity in juvenile court or relating to protective service proceedings or an alcohol and drug abuse act.

The bills passed by “unanimous consent,” which means there was not a roll call vote for them.

However, Jarchow was listed as absent or not voting that day in every other vote. For example, the vote on AB642 came up at 4:03:07 into the session video. There was a roll call vote on ANOTHER unrelated bill (not on the list of 91) at 3:51 – so 12 minutes earlier. You can see from that video that Jarchow was still absent (the written record shows it too). The second bill came to unanimous (non roll call) vote at 5:36 into the video. Again, Jarchow was still absent in other votes shortly before and after.

Furthermore, we went through every Assembly Journal after that date through Jarchow’s end date for leaving the Legislature to ensure he didn’t ask to have his vote included later on and found nothing.

We contacted the Assembly chief clerk’s office. “Our records indicate that former Rep. Adam Jarchow did not claim per diem/mileage/expenses on 02/20/2018,” Janine Hale, fiscal clerk for the Office of Assembly Chief Clerk, told Wisconsin Right Now.