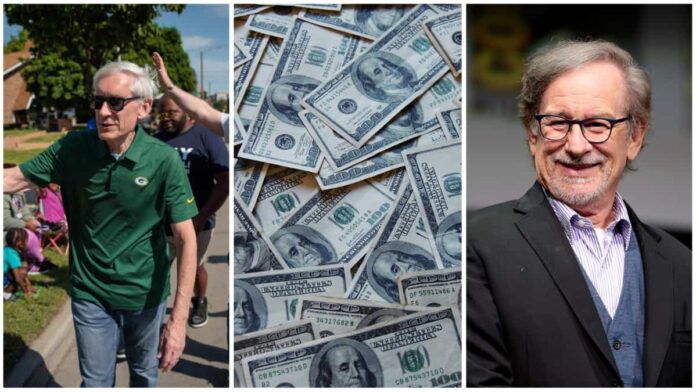 Democratic Gov. Tony Evers raised $10.13 million in campaign donations during the first six months of 2022, but nearly half of it came from the state Democratic Party and 31 big donors, including Hollywood celebrities Steven Spielberg and his wife, according to the Wisconsin Democracy Campaign.

“Campaign finance reports filed by the candidates show the Democratic Party made $4.34 million in cash and in-kind contributions to Evers campaign. Thirty-one individuals contributed $20,000 each – the maximum individual contribution to a statewide candidate allowed by law – for a total of $620,000,” the WDC reported.

“Evers’s fundraising haul was about 85 percent higher than the $5.46 million that his predecessor, former GOP Gov. Scott Walker, raised at a comparable time during the first half of the 2018 governor’s race. Walker lost his bid for a third four-year term to Evers in 2018.”

The report notes: “Evers’s campaign finance report also showed he spent $12.95 million in the first half of 2022 and had $7.7 million in his campaign account as of June 30.”

The WDC also compiled a list of Evers’ top donors.

The 31 people who each gave Evers the maximum $20,000 contribution are, according to WDC:

“Steven Spielberg and Kate Capshaw, of Los Angeles, CA. Spielberg is film director. Capshaw is a retired actress and painter.

Jeff and Erica Lawson, of San Francisco, CA. Jeff is co-founder and chief executive officer of Twilio. Erica is a pediatric rheumatologist.

Robert and Jennifer Hillis, of Fox Point. Robert is founder and president of Direct Supply Inc.

Laura Naylor, of Brooklyn, NY, director and producer at By The By Productions.

James Hyde, of Dousman, a Medical College of Wisconsin biophysicist.

Eric Green, of Concord, MA, an attorney who founded Endispute and Resolutions, LLC.

Gaye Pigott, of Seattle, WA. Pigott and several extended family members own a nearly $7 billion stake in Paccar, one of the largest truck makers in the world that was founded by the family in 1905.

Michelle Lubetzky, of New York City, a doctor who specializes in kidney disease and care.

Hope Aldrich, of Santa Fe, NM, a retired newspaper publisher who is a member of the famed Rockefeller family.

The WDC noted: “The employer information for large donors was supplied by the Wisconsin Democracy Campaign because campaign finance laws were changed in 2015 and no longer require candidates to make that contributor information available to the public. Employer data about contributors to legislative and statewide candidates is important because it shows the public the special interests that are supporting and influencing candidates.”