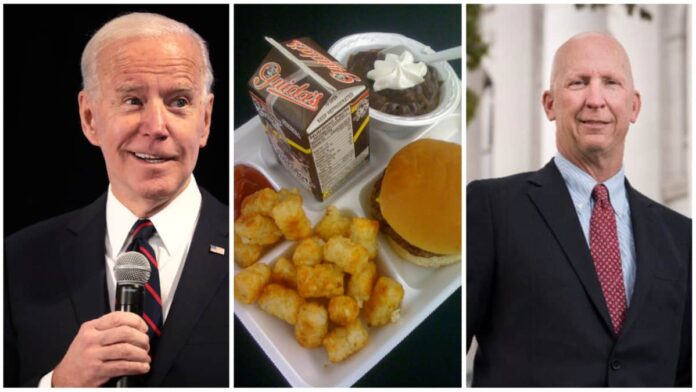 Days after emphasizing “healing” and “unity” in his inaugural address, one of the first actions taken by President Joe Biden upon entering the oval office was the signing of an executive order that revealed his administration’s intent to pick up from where the Obama administration left off by weaponizing the Title IX prohibition on sex-based discrimination to strong-arm schools across the country into adhering to its divisive, identity politics agenda.

On May 5 of this year, the secretary of the U.S. Department of Agriculture (USDA) cited the Biden executive order in issuing a directive to state education agencies and public and private schools participating in the National School Lunch Program and other federally-funded child nutrition programs to “expeditiously review” and “make necessary changes” to their program discrimination complaint procedures by August 3 “to ensure complaints alleging discrimination on the basis of gender identity and sexual orientation are processed and evaluated as complaints of discrimination on the basis of sex.”

In June, the U.S. Department of Education (DOE) followed suit by releasing proposed changes to Title IX regulations in alignment with the Biden executive order and USDA guidance. In attempting to redefine “sex” under Title IX to include “sexual orientation and gender identity” by way of executive fiat, the Biden administration has cited and hung its hat on an erroneous interpretation of a U.S. Supreme Court decision (Bostock v. Clayton County) that was limited in its application to workplace discrimination protections under Title VII of the Civil Rights Act.

As a result of the Biden administration’s continued assault on state and local control by way of brazen federal coercion, both public and private schools in Wisconsin could have their federal funding – including school lunch benefits intended to feed needy children – jeopardized for failing to open bathrooms, locker rooms, sports teams and any other sex-separated offering to individuals of the opposite sex. For example, a boy who claims to identify as a girl competing in girls’ sports.

In Wisconsin, we’ve already gotten a glimpse into what the future may hold if the Biden administration is successful in making school lunch funding and other sources of federal school funding contingent on conflating biological sex with gender identity. In May, it was revealed that Kiel Area School District had opened a Title IX sexual harassment investigation against three eighth grade students for allegedly using “incorrect pronouns” when referring to a classmate. While the school district subsequently dropped its investigation after the story unsurprisingly garnered national media attention, the Biden administration’s attempted transformation of Title IX could open the floodgates and make incidents such as the “mispronouning” case in Kiel commonplace across K-12 schools and universities throughout the country.

While it’s almost certain that the Biden administration’s actions will be swiftly challenged in court, it’s important for parents and families to be aware of this looming issue as the August 3 deadline for schools to comply with the USDA’s May directive quickly approaches.