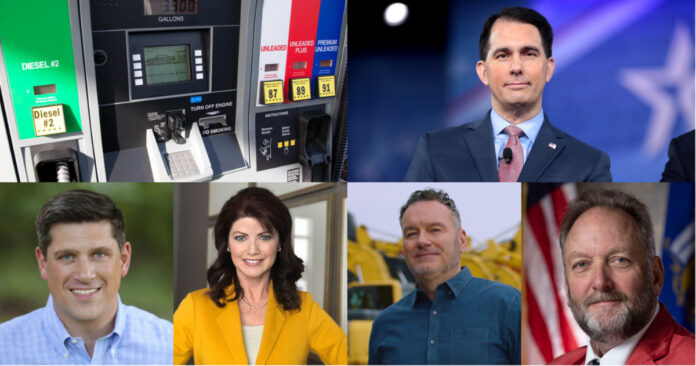 Wisconsin Right Now asked the gubernatorial candidates their opinions on the Wisconsin gas tax, indexing of the gas tax, their thoughts on how Scott Walker handled the transportation budget, and their opinion of the minimum markup law.

We sent the campaigns the following questions:

2) Do you believe automatic indexing of the gas tax should be brought back? Why or why not?

3) What do you think of the way Scott Walker handled the transportation budget? What do they think Scott Walker should have done differently?

4) Do you think there is bloat in the transportation budget? Where and how much?

5) What is your position on Wisconsin’s minimum markup law?

Here are their responses:

“When I’m governor, money already paid by road users will pay for the roads — and I will hold the line on the gas tax. I’ll move the state patrol and transit out of the transportation fund, which would save nearly $2 billion over 10 years, and transfer taxes collected from vehicle sales and part of utility tax collections paid by electric cars into the fund. I’ll also enact reforms to ensure projects are bid competitively and remain on time and under budget. The state already collects more taxpayer money than we need to pay for our roads, so there is no reason any candidate for governor should even consider raising the gas tax.

The Walker–Kleefisch administration closed the door to higher gas taxes and focused on investing in local roads instead of mega projects. We even did it while fixing the problems created by Jim Doyle, who raided the Transportation Fund. Since the road builder’s pick for governor was elected, local roads have gotten worse, but Tony Evers’ builder buddies still get paid. Make no mistake: they don’t actually care about bonding or your local roads, proven by Evers vetoing money in his first budget for local roads. Evers’ and Michels’ lobbyist friends only care about making their fortunes off taxpayer dollars.”

“I am a Republican, but I don’t agree with everything every Republican does. Michels Corporation is and has been a member of dozens of trade associations, but that doesn’t mean I personally agree with everything every one of them does. I will note that I am the only candidate in this race who is rejecting financial support from any special interest PAC or lobbyist for any industry or group.

“Generally, Scott Walker’s budgets were very good, which is why I was one of his biggest supporters. Barbara and I, like we have for Ron Johnson, invited him into our home in Waukesha County and held a fundraiser for him. To be perfectly clear, I helped Scott Walker and had no part in the funding or implementation of any effort to defeat him. It is a garbage political smear that others have anonymously tried to spread during this campaign and there is no truth to any of it. I voted for Scott Walker, financially supported him, and wished he would have beaten Tony Evers. Period.

“Despite my support for Scott, there is additional belt tightening that can still take place, but overall Scott Walker did a good job.

“The best way to get relief at the pump is to increase American energy production, but I am willing to consider a gas tax holiday and repeal of the minimum mark up as well. As someone who was helping build the Keystone XL pipeline before Biden shut it down, I know energy policy. It’s not a talking point in a political stump speech for me. Unlike my opponents, I have actually worked to make America energy independent.

“Infrastructure is vitally important to public safety and a healthy economy, but all government spending has to be justified and balanced with the impact on those who pay the bills. I would not introduce a gas tax hike or a return to indexing. Automatic tax hikes only benefit insiders by protecting them from having to justify their position.

“So much of the current economic chaos can be traced to two things, the election of Tony Evers and Joe Biden. They are two peas in a pod, career politicians and bureaucrats in way over their heads. Reckless spending under the guise of Covid relief, coupled with choking American energy production has led to these horrific spikes in the price of gasoline and diesel, which has in turn driven up the cost of everything.

They both have to be defeated.”

“One of the state government’s primary responsibilities is infrastructure. As I drive around the state, there’s no doubt we haven’t kept up our roads and bridges the way we should. We must do better in Wisconsin.

As I’ve said about every other aspect of the state budget, we need to strip it down to zero, see what our obligations really are, remove the waste and bloat — whether it’s WI DOT employees who are still working remotely or the possibility of collusion in bidding — have an honest conversation about revenue and funding, and make the investments we must to keep our state moving.

I’ve pledged to not raise taxes as Wisconsin’s governor, and I do not support indexing taxes to inflation.

1) “Can’t eliminate or decrease as the gas tax is the primary funding source for the DOT. I lean towards indexing as the probable option that will enable funds to the DOT to help sustain its needed programs. The longer we hold off on repair, replacement of current infrastructure, the more it will cost. It’s an inevitable result that we can’t avoid.”

2) “Yes, indexing should be reconsidered and returned as an option to continue necessary DOT funding.”

3) “Both former, and the soon-to-be former Governors’ handling of the trans budget, is a topic I will refrain on responding to. My focus is now, not then, and what we have going forward is different. As such, my action(s) as Governor will address current and strategic conditions that will flex with the dynamics of our state and national conditions, to mitigate and possibly eliminate adverse effects on Wisconsin.”

4) “The demands on existing and projected infrastructure needs simply don’t allow for any “bloat”. What the focus needs to be is an action plan that lists, both in priority and severity sequence, the infrastructure-related expenses, plus the cost-effective, return-on-investment for the DOT and the taxpayer, so the urgency is resolved. As already stated, the longer we wait, the more these necessary projects will cost. Time is not a friend here.”

5) “I did see an expression above that I agree with re: the effect of the elimination of the minimum mark-up. That would be on small businesses, the ones that sell fuel as part of a product/service offering. It would be a death nail to their businesses and allow for a monopoly of larger stores/businesses to control the product offering. The MML helps keep the field balanced and competitive, it needs to stay that way.”