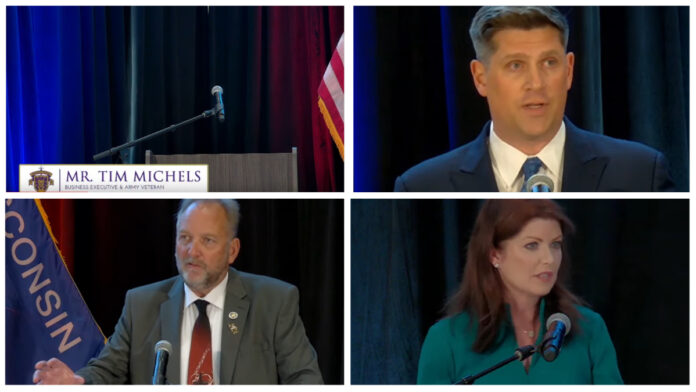 Republican gubernatorial candidates Rebecca Kleefisch, Kevin Nicholson, and Timothy Ramthun took the gloves off, slamming businessman Tim Michels for skipping a candidate debate in Green Bay and raising questions about his residency and ties to organizations that worked to raise the state’s gas tax.

The candidates also made news on other issues in the first full debate in the GOP primary; the three candidates were asked if they would remove pro-abortion district attorneys who won’t prosecute Wisconsin’s abortion law, like Milwaukee County District Attorney John Chisholm. All three said they would fire them.

Asked whether they thought the 2020 election in Wisconsin was stolen, only Ramthun said yes. Host Joe Giganti said the candidates needed to answer with a yes or no or they could not answer that question.

Nicholson said the WEC, which he wants to eliminate, was originally sponsored by the Walker-Kleefisch administration and added that Michels wanted to keep it (before changing his position.) He also outlined a list of election-related reforms. Kleefisch said that the WEC replaced the Government Accountability Board, which she said went on a “witch hunt” against conservatives but admitted “mistakes” were made in creating WEC. She too wants it replaced.

However, the candidates saved their sharpest barbs for the missing Michels.

Kleefisch and Ramthun both mentioned a Wisconsin Right Now story that explored Michels’ ties to groups that have aggressively pushed for an increase in the state gas tax. That story ran on the morning of the debate, which was held at Providence Academy in Green Bay on June 27, 2022.

An “article came out today about why our gas taxes are so high that he and his organizations are involved in,” Ramthun said of Michels. “…He has issues regarding residency. There are gray clouds all over the place. The public needs to know where his heart is really at. There are lots of questions to answer and in my humble opinion that’s why he’s not here tonight. It doesn’t bode well.”

Kleefisch said she would never raise the gas tax in Wisconsin and added, “I would certainly not spend my life lobbying for it like Tim Michels has.”

“We showed up because we care about the voters of Green Bay,” Kleefisch added, referring to the debate. “We want to have a debate on the issues but Tim Michels does not.” She said Michels needed to check with his campaign before answering questions about the Second Amendment and claimed, “Tim Michels saw the article that came out today in Wisconsin Right Now. He has fought for years to index the gas tax to inflation, the same position as Tony Evers.” Michels has also “funded organizations that opposed the idea of not allowing contracts to be given to companies that employed illegal immigrants,” Kleefisch said.

Nicholson said that, as governor, he would work to repeal the state’s minimum markup law to lower gas prices, which are quickly becoming a focus in the Republican primary.

“If I were Tim Michels, I might say I spent a lot of time in Connecticut and New York and am not around very often,” Nicholson said, mentioning the $1.6 billion in government contracts received by Michels Corp. He called Michels a “pre-funded, pre-bought candidate who exists today because of government contracts” and said, “if you’re in this fight” and worried about what kids are taught in public schools, you “don’t educate them in Connecticut. You don’t disappear for 10 years.” As Wisconsin Right Now previously reported, all of Michels’ kids graduated from high schools out east.

To laughter from the crowd and candidates, host Joe Giganti told the three GOP candidates that he would present a question he was going to ask Tim Michels to them instead. “You can give the answer you believe he would have said,” Giganti stated. The camera then panned to an empty podium.

But where was Michels?

Michels was holding what he called a “freedom rally” the same night as the debate. He criticized his opponents for going after him in a statement posted to social media.

He wrote on Facebook, “Some candidates think the path to victory is to tear other Republicans apart and divide the party. I’m a builder. I’m building a strong collation (sic) of voters from all across the state to beat Tony Evers, and that’s what I’m focused on.” He called the freedom rally “an epic grassroots gathering of folks ready to get Wisconsin back on track. We registered new voters and signed up dozens of new volunteers.”

Michels slightly led the field, albeit in the margin of error, in a recent Marquette poll with 27% to 26% for Kleefisch and 10% for Nicholson. However, the poll also showed that only Kleefisch was in the margin of error against Democratic Gov. Tony Evers. With the race so tight, the gloves are coming off as the candidates try to differentiate themselves to voters.

At one point, Giganti, who is a conservative talk show host in the Fox Valley, gestured to Michels’ empty podium on the stage and asked, “You have run ads and made statements to effect that you don’t need it, don’t want it, won’t take it, referring to special interest or lobbyist money. Is this because you and your Michels Corp. have been members of and contributed heavily to the very organizations you claim you want no part of and thus essentially you would be taking your own money?”

But of course Michels was not there to respond.

On other issues, from abortion to law enforcement, the candidates were united, showing no significant policy differences among them.

Kevin Nicholson stressed his support for universal school choice and law enforcement, criticizing that “children are being taught to hate themselves, their country and their fellow Americans based on race.” He also criticized the “record-setting violence” and “fundamental dissolution of law and order in the state.”

He said: “We need people to step up who are outside the political class who are willing to do things differently and can actually win in November.”

Kleefisch said she would sign a “Florida-style vaccine mandate ban in Wisconsin,” saying that Gov. Tony Evers had steamrolled individual rights. She described herself as “the only conservative proven reformer running for governor. I’m a tea party mom, a former small business owner, and a former watchdog journalist who against all odds became lieutenant governor.” She then listed various reforms accomplished by the Walker-Kleefisch administration, from defunding Planned Parenthood of state dollars to prevailing wage reform and Act 10.

Giganti asked the three candidates: “Why is it so important to you to be here tonight?”

Nicholson said, “If you aren’t here tonight in front of a moderator who wants a Republican to win in November, then you’re not prepared to actually win in the general election. There was never a question we would be here.”

Nicholson said that he is a blunt person who says “what needs to be said.” He added, “I don’t think the insiders who run the Republican political machine in Madison who have lost 11 out of 12 statewide elections are particularly adept at deciding who should represent us.”

Kleefisch said, “I care about the voters of the Green Bay area. It’s one of the most important areas of the state.” She said voters should “put a proven tested conservative fighter against Tony Evers” to “usher in the next golden age of conservative reform.”

Ramthun said, “I could not pass this up for any money in the world. My goal is to make a difference for this entire state…I would like to see us do more debates like this. I am in this to win it.” He called himself the “only MAGA candidate running in this race.”

According to Kleefish, Evers panders to a “leftist mob and anarchists.”

All of the candidates said they are against legalizing marijuana.

Kleefisch said she would keep the 1849 law on the books in Wisconsin, calling herself pro-life and pro-baby. Nicholson said he was “elated” that the Supreme Court did the right thing, returning the decision “to the people of Wisconsin” and throughout the United States. He cited his non-profit’s work with pregnancy centers.