Evers, Kleefisch in Margin of Error; Michels Up by 1% in GOP Primary

Republicans have more enthusiasm, and most voters think the state is on the wrong track, which puts Tony Evers on shaky ground. But it will be a battle to defeat him.

Former Lt. Gov. Rebecca Kleefisch is in the margin of error against Democratic Gov. Tony Evers – a fact that Evers’ campaign was highlighting in a furiously written fundraising email within minutes of the new Marquette Poll reporting it, calling the race a “pure tossup.”

You wouldn’t know that from some of the media. The Milwaukee Journal Sentinel reported that Evers had an “advantage” over all Republican candidates for governor in the poll, which was released June 22. The other Republican candidates for governor were behind Evers in the poll, outside the margin of error of 4.3%. It’s the first 2022 Marquette poll to measure Evers against the Republicans in head-to-head match ups. However, the numbers also show that the Republicans have their work cut out for them: 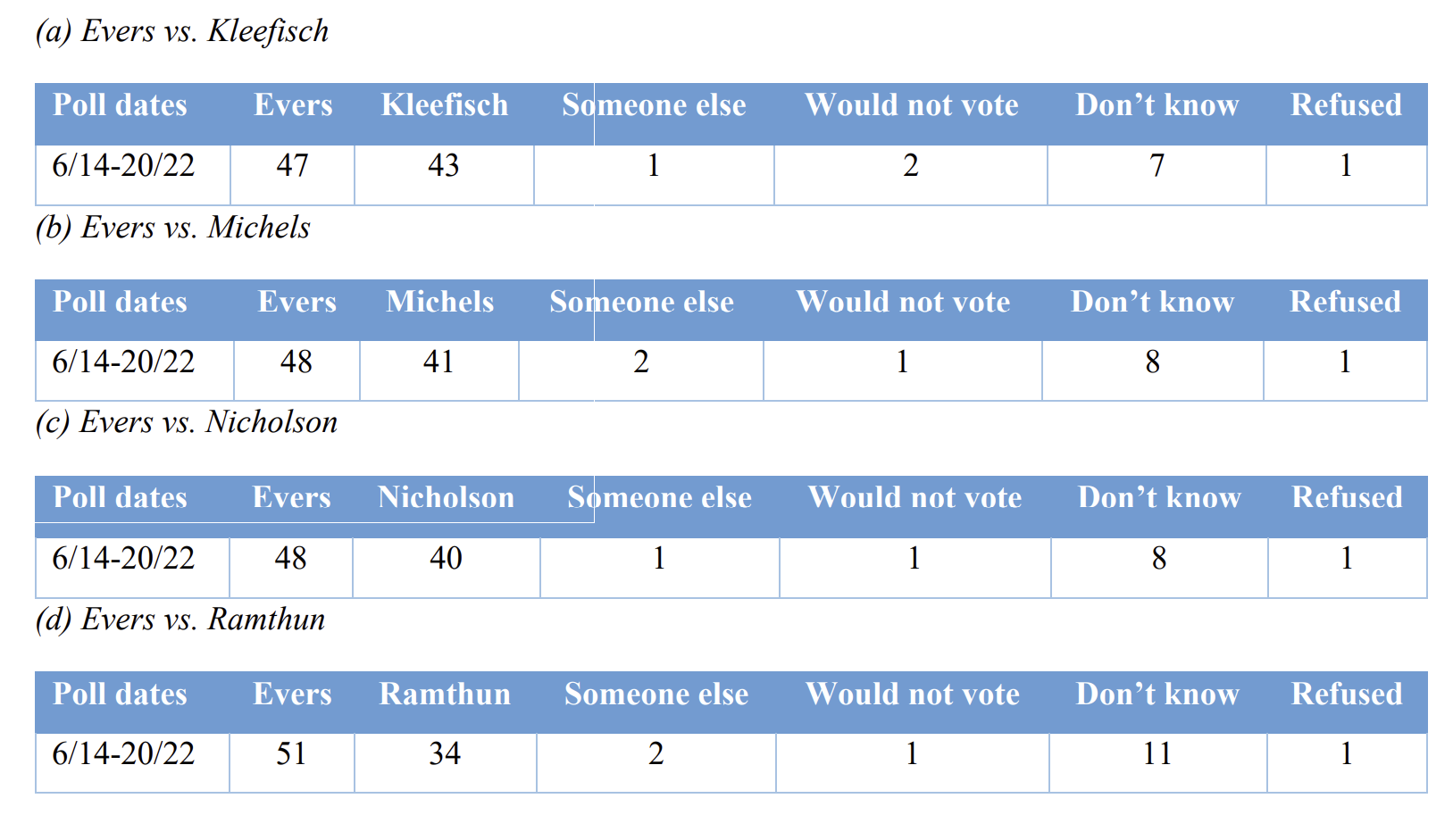 Here’s how Evers was spinning it: 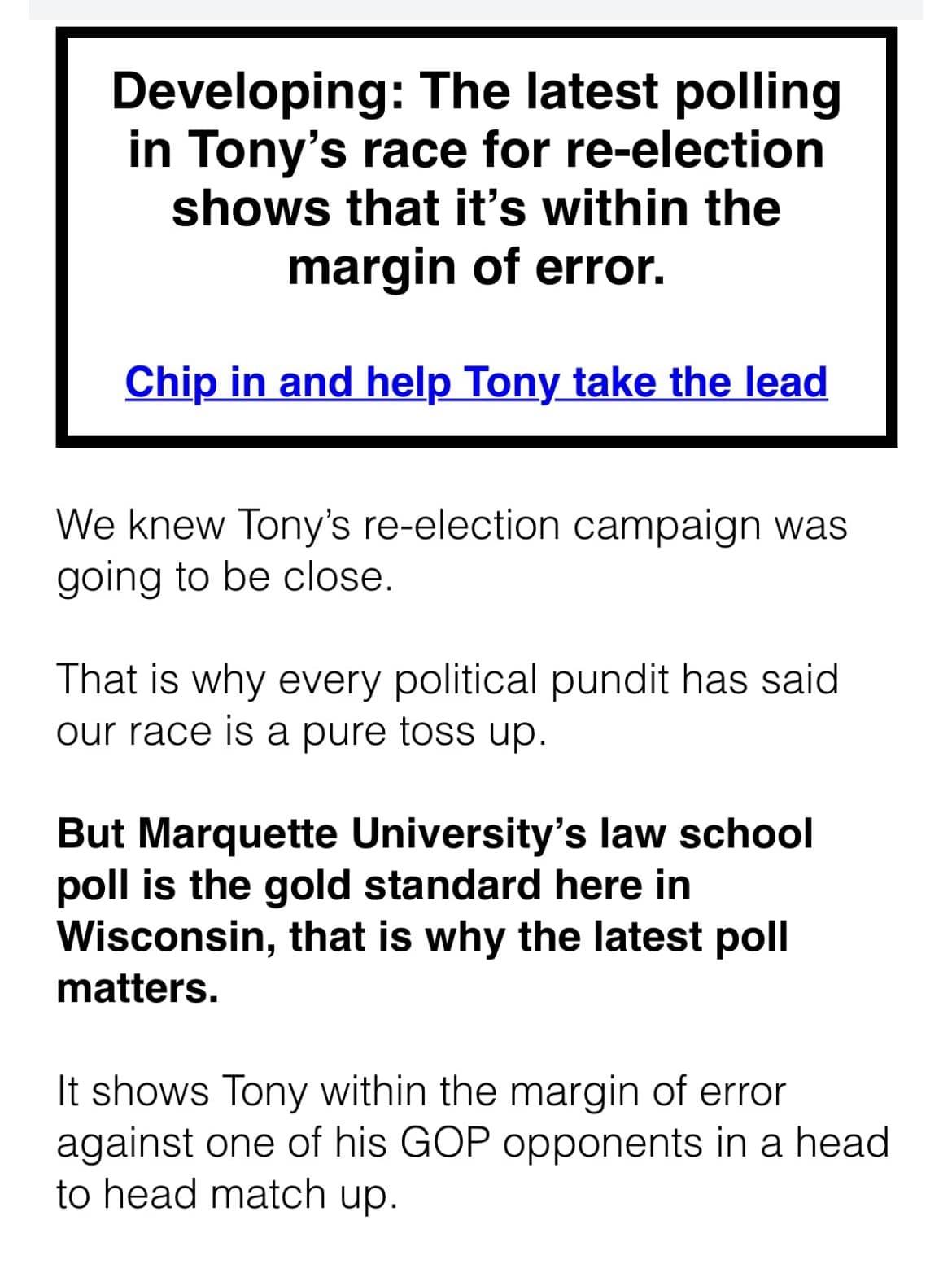 However, Kleefisch has quite a primary battle still on her hands, the Marquette poll also showed. She trails builder Tim Michels in the GOP primary for governor by 1% – a result that is also in the margin of error, with 32% undecided. Her support has slipped slightly among primary voters since Michels joined the race when she was favored by 32% of primary voters: 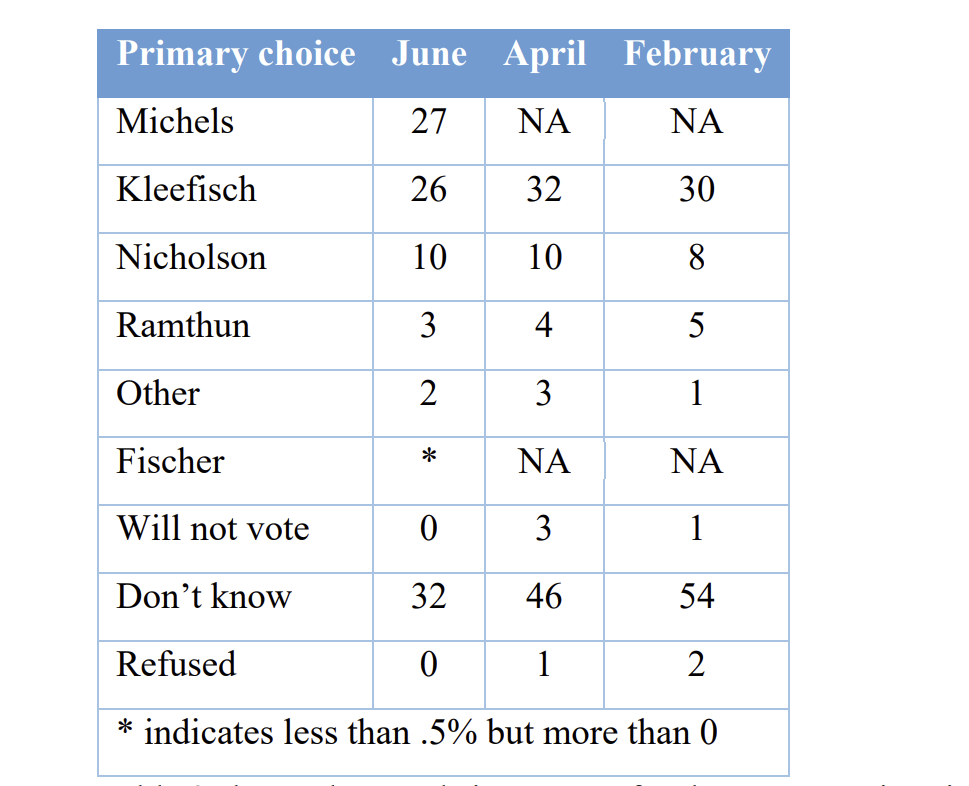 That means that the governor’s race is a toss up – at least between Evers and Kleefisch – and the GOP primary for governor is a toss up too. Furthermore, 56% of voters think the state is on the wrong track, with only 37% thinking it’s going in the right direction. That’s almost a complete reversal from 2019.

One critical finding that was buried in the poll: Republicans have a lot more enthusiasm to vote right now (67%) than Democrats (58%) or independents (35%).

“This enthusiasm gap is large enough to shift the vote margins significantly in hypothetical November general elections,” the pollster noted.

Since the poll measured registered, not likely voters, that makes the results more ominous for Evers (and better for U.S. Sen. Ron Johnson, whose polling we discuss in a separate story). That’s especially true in a midterm election where turnout is historically lower than a presidential election. All of the Republicans fair better when overall turnout goes down, as well, in this poll.

There are some positives and some negatives for each candidate in this poll, frankly:

Positive: People like him more than they like Joe Biden, and view him more favorably than not. He’s ahead percentage-wise when compared to all Republican candidates.

Negative: Kleefisch is in the margin of error against him. Most people don’t think the state is on the right track.

Positive: She’s the only GOP candidate to perform in the margin of error against Evers. She does better with independents against Evers than Michels does. She hasn’t lost major ground despite Michels’ heavy spending and Donald Trump endorsement.

Negative: She’s got a likability issue, viewed more unfavorably than favorably (although more people haven’t heard enough to say). She’s behind Michels percentage-wise slightly. She’s slipped slightly in the polls among Republicans since Michels entered the race. She still hasn’t sealed the deal (but that’s true of them all).

Positive: He’s ahead percentage-wise by 1% when he wasn’t even in the race in the last poll. To put it plainly: Kleefisch is slipping, albeit slightly, and he’s climbing. More people don’t know him, so he has a chance to use all of that money to make sure they know him positively (although not being known is a risk too if you get defined negatively by your opponent first.) He does slightly better than Kleefisch with Republicans. He’s stolen Nicholson’s pathway, at least at this point.

Negative: He doesn’t do as well against Evers or with independents as Kleefisch in a general election head-to-head (although more just don’t know him). The Trump endorsement and all that money did not pull him way ahead.

The other GOP candidates:

Kevin Nicholson scored 10%. He hasn’t gained or lost dramatically since the previous polls, as it appears that Michels is occupying some of his path. He needs a surge to be viable. Right now, he’s positioned to play spoiler for someone. Ramthun doesn’t appear to be a factor, and he’s slipping.

The poll was conducted June 14-20, 2022, after the June 3 Trump endorsement of Michels. The Marquette poll is generally considered a fairly reliable poll although it famously predicted that Hillary Clinton would defeat Donald Trump in the 2016 presidential election. Whether it is still undercounting Trump voters remains to be seen. The poll fared better in the presidential election in 2020.

Very or somewhat enthusiastic to vote when added together:
Republicans, 87%
Independents, 70%
Democrats 84%

One potential bad omen for Kleefisch in a general election; Scott Walker (she was his lieutenant governor) is viewed unfavorably by 47% of those in the poll with 39% viewing him favorably.

But a potential bad omen for Michels in a general election, who is endorsed by Donald Trump: Trump is viewed unfavorably by 56% of people in the poll and favorably by 39%.

Thirty percent of people polled have an unfavorable opinion of Kleefisch and 26% favorable.

When it comes to Michels, those numbers are even – 22% each.

However, 39% haven’t heard enough about Kleefisch to say, compared to 51% when it comes to Michels.

Kevin Nicholson is viewed favorably by 16% and unfavorably by 14%, but 63% of people don’t know enough to say.

Tim Ramthun is viewed favorably by 4 percent, and unfavorably by 11% with 76% not knowing enough to say.

95% are very or somewhat concerned about inflation.

By comparison, 82% were very or somewhat concerned about abortion.

45% were very or somewhat concerned about the pandemic.

82% were very or somewhat concerned about gun violence and 83% about healthcare.

More people want athletes to play only on teams that match their birth gender 62%.

58% want abortion legal in all or most cases. 35% want it illegal in most or all cases.

67% of voters polled are very or somewhat confident in the results of the 2020 election.