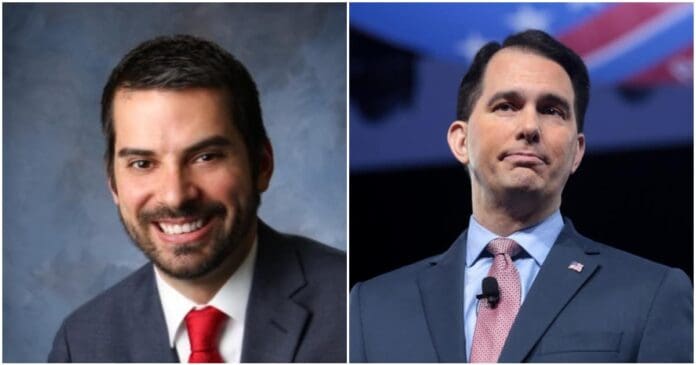 Misleading criticisms do not help anyone… except Democrat Josh Kaul.

We asked Toney for his stance on the John Doe probe after he was the subject – yet again – of a misleading attack piece by his Republican opponent for attorney general, Adam Jarchow, and Jarchow’s associates. This time the piece – by political strategist Deb Jordahl – attempted, without any evidence whatsoever, to attach Toney to the excesses of the Doe.

We think the article – written for a national conservative site and then pushed out quickly by the Jarchow campaign – was designed to dry up donor support for Toney and stunt his momentum coming out of the state convention, where he embarrassed Jarchow with a dominant showing. To do that, the author attempted to imply that Toney is an over-zealous prosecutor like those who went after Walker and his associates (including Jordahl) during the Doe.

Toney became DA in 2013 in the midst of the ongoing Doe investigation. As a new DA, he was approached by the Milwaukee County District Attorney’s office and asked if he would join the already ongoing probe. This was likely because Milwaukee County DA John Chisholm was hoping to lure another Republican District Attorney into the probe, which had morphed into Doe 2, to give it a bipartisan tenor.

He also promoted an attorney, Dennis Krueger, who had represented a target in one of the Does. Toney made Krueger his deputy DA.

Deb Jordahl’s piece, if it was a fair examination of the issue, should have told readers these facts.

It’s a pattern. Jarchow and his allies have repeatedly pushed out misleading attacks against Toney, often through liberal media sites.

“Over the last several years, we have watched state and federal prosecutors spy on, harass and lock innocent people up because of their political views. Based on his recent history, Eric Toney is not a good bet to stand up to these forces of evil and do the right thing when that thing is hard to do.”

But she doesn’t tell readers he did just that!

She also wrote, “Adam Jarchow does not see the position of Attorney General as a lifelong career…the only reason he jumped into this race is that he does not trust his Republican primary opponent, Fond du Lac District Attorney Eric Toney, to protect and fight for the rights of average citizens like you and me. As a survivor of the intrusive and illegal John Doe investigations, I share Adam’s concerns.”

Deb Jordahl’s core argument against Toney is that he adheres to the “rule of law” to such a strict degree that he doesn’t appreciate how prosecutions impact people (we thought conservatives wanted rule of law judges and prosecutors…?)

However, this is a cheap shot in three ways:

1. As noted, Toney refused to join the Doe probe.

2. The Doe probe was based on a supposed “offense” that courts later ruled wasn’t against the law at all. Thus, it would logically hold that a strict “rule of law” style prosecutor like Toney would REFUSE to join it, not participate. And that’s exactly what he did.

3. Jordahl criticizes Toney for two prosecutions – one into felony voter fraud and one into COVID.

In the first instance, perhaps it’s unfair that it’s a felony to register to vote with a PO Box, but that’s on the Legislature. District Attorneys don’t make laws. It’s an odd stance for a conservative to argue against voter fraud prosecutions.

In the second, people miss (or intentionally ignore) the fact that Toney filed the COVID cases during Gov. Evers’ FIRST emergency order, which NO court ever found unlawful. District Attorneys aren’t courts. When the state Supreme Court invalidated Evers’ SECOND order as unlawful, Toney dismissed the prosecutions. He also refused to prosecute Evers’ mask mandate in his county, deeming it unlawful.

Misleading criticisms do not help anyone… except Democrat Josh Kaul.

Adam Jarchow has never prosecuted a criminal case. He has a history of anti-police and anti-public safety measures in the state Legislature. He has trashed the state’s largest and bipartisan police association. He once said bars and restaurants should require people to wear gloves during COVID.

Misleading criticisms against Toney, the only candidate in the race who has ever prosecuted a case, do not advance the cause of freedom. Because he’s the candidate with the best resume to defeat Democrat Josh Kaul, they hurt it.