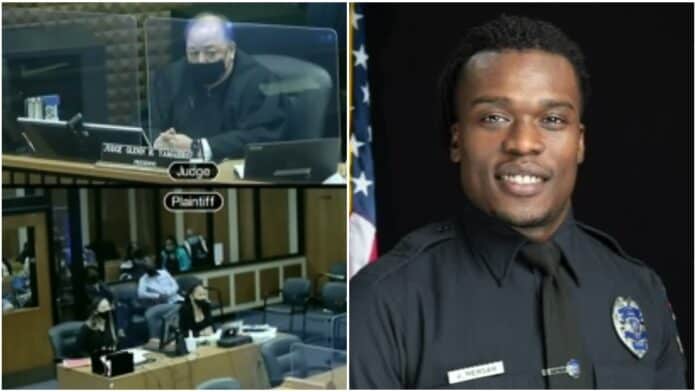 It was unprecedented to resurrect a police shooting case in which the officer was repeatedly cleared years ago. But the Legislature allowed it.

Joseph Mensah, the former Wauwatosa police officer who is now a detective in Waukesha County, was cleared on Wednesday, June 1, 2022, by yet another review of any criminal wrongdoing in the 2016 shooting death of Jay Anderson Jr.

The decision was made by two Democratic special prosecutors, Scott Hansen, a business attorney, and Tim Gruenke, the District Attorney of La Crosse County. The special prosecutors decided that they could not prove Mensah was not using self-defense when he shot Anderson.

Key in their decision not to file criminal charges against Mensah: They showed still photos from a squad dashcam video to a diverse mock jury from Milwaukee County, as well as a slew of other officials, including retired and sitting judges. Those people believed that criminal charges could not be proven beyond a reasonable doubt because of Anderson’s own actions in the final seconds, reaching toward a gun on his passenger seat.

The decision finally ends the endless criminal legal saga endured by Mensah, who was previously cleared after multiple reviews in the death of Anderson and in the unrelated shootings deaths of two other men, both of whom were armed. Anderson, 25, was asleep in a vehicle at Madison Park on June 23, 2016, when Mensah, while on patrol, stopped to investigate the suspicious vehicle.

Mensah told investigators he shot Anderson after Anderson ignored commands to not reach for a gun which was located on the passenger’s seat.

Hansen said in court Wednesday that their decision revolved around the concept of self-defense under the law. Mensah was entitled to use deadly force if he reasonably believed his life or that of another was in danger or they were in danger of imminent great bodily harm.

“The question we ultimately focused on was self-defense,” Hansen said.

After the decision, Kimberley Motley, the lawyer for the family, vowed to track down mock jurors to use as witnesses in a federal case. She claimed “we proved it,” even though the two special prosecutors thought otherwise, as did previous reviewers, including Democratic DA John Chisholm. The victim’s mother emotionally told the judge how hard she has been working to afford attorneys’ fees in the case.

“I am looking forward to talking to the mock jurors,” Motley said, calling the mock jury “flawed” and accusing the special prosecutors of “gaslighting.”

Hansen said the dashcam video captured the final 18 seconds before Mensah began firing. The special prosecutors had that video’s frames converted into still images. According to Hansen, they show that in the last two seconds before Mensah began to fire, Anderson’s hands were raised and then he leaned toward where he had a gun on the passenger seat. He raised his hand and then quickly dropped it down again as he leaned forward.

Hansen said the prosecutors showed the images to more than 30 people, including sitting judges and retired lawyers. And they showed a diverse group of citizens in Milwaukee County, asking them to review the video.

“They overwhelmingly…believed that motion Anderson made was enough to cause someone in Mensah’s position to fear he was going to be shot himself,” said Hansen.

He said the prosecutors would have had to prove the opposite of what all those people believed to file charges, and they don’t believe they could do so.

Hansen said the prosecutors met with Motley and the family for a couple of hours and could “see the pain the family has gone through. I’m sorry there is nothing we can do to help you.” They said they are suggesting some changes to lead to a better investigative process.

The Special Prosecutors were appointed by Milwaukee County Judge Glenn Yamahiro, who refused to recuse himself despite an alleged conflict of interest. His ex-wife and the mother of his child, Deja Vishny, was a lawyer for the Anderson family who had called for months for Mensah to be criminally charged.

He will not be.

Yamahiro then commenced a John Doe proceeding that was, by its very nature, one-sided. It was basically run by the Anderson family attorney Kimberley Motley. Because he has never been charged in the case, Mensah and his lawyer were not allowed to ask questions, present evidence or cross-examine witnesses.

The state Legislature basically exempted themselves from John Doe statutes after the proceedings into former Gov. Scott Walker, but they left police officers at their mercy. That allowed Motley to ask a judge to seek criminal charges against Mensah. The judge found probable cause that a crime was committed, but that’s a lower standard than the reasonable doubt needed to file charges and convict. He then chose the two special prosecutors to make that determination, and they decided they could not prove any charge beyond a reasonable doubt to a jury.

Yamahiro denied a motion by Motley that he basically fire the special prosecutors, saying he found her failing “erroneous in several respect.”

He said he was satisfied that the prosecutors followed the law and reviewed “what they could prove beyond a reasonable doubt. That’s what they did.”

He claimed the process, which was live-streamed, was transparent, which Motley disputed during a later news conference

The judge noted that the mock jury was “heavily comprised of people of color.”

He trashed police for what he called “mistakes” made during the investigation and criticized “selective use of body cameras.”

“I reject the notion that this was a waste of time,” Yamahiro said. “… am satisfied with the job that has been done here… I am not going to schedule any further hearings in this matter.”