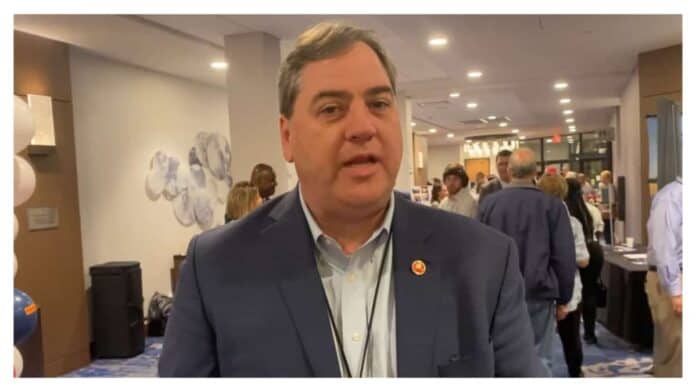 I’ve had the privilege of growing up around the conservative movement for my entire life, but I never imagined that I would eventually lead our state party in a crucial election year. Since my election in August, I have been able to travel the state and share important conversations with our grassroots activists who represent the driving force behind our efforts.

This year’s Republican Party of Wisconsin State Convention was no exception. While in Middleton, I appreciated hearing the diverse perspectives of the Party Faithful and discussing what conservatives can do to win in November, and how we can make Wisconsin a better place to live for families today and for generations to come.

I’ve learned a lot from these conversations. My biggest takeaway? Republicans have more in common than we give ourselves credit for.

The Republican Party was born in Ripon, Wisconsin of a group of independent thinkers who sought to end the evil of slavery in the United States. To this day, Wisconsin Republicans are still independent thinkers – and even rabble-rousers – motivated by a love of country and a desire to strengthen our communities through tried-and-true conservative policies. These conservative ideals are what unite us, and if we effectively spread our message, they are our key to success in these crucial 2022 elections.

We believe in election integrity. Despite Democrats’ attempts to discredit and distort our message, we know that our mission is to make it easy to vote and hard to cheat. We want to ensure that all Wisconsinites can securely cast their vote and feel confident in the result.

We believe in the sanctity of life. We know that human life is a gift from God, and we reject Democrats’ efforts to allow abortion on-demand until the moment of birth. We recognize the importance of speaking up for the unborn and supporting mothers.

We believe in education that teaches children how to think – not what to think. We stand up for the rights of parents to decide what is best for their child. We believe in bolstering school choice programs so that all students have equal access to education, regardless of zip code.

We believe in standing up for public safety. We know that Wisconsinites deserve to feel safe in their communities. We take the threat of soft-on-crime policies seriously and support our law enforcement officers who put their lives on the line to protect us.

Ultimately, we believe in the rights of the individual. We know that Americans should be able to start a business, raise a family, and live their lives without government interference. We know that this fosters innovation in our economy and strengthens our communities.

The enthusiastic attendance of nearly 1,600 individuals from every corner of Wisconsin showed us that Republicans are still bonded by these core beliefs – and we’re motivated to re-elect Senator Ron Johnson and defeat Tony Evers this fall. Our nearly 20 candidates running for statewide office all signed unity pledges promising that they will get behind whoever emerges from the primary, and many spoke about unity in their speeches. This convention showed our common belief that our Party must and will come together behind our nominees.

Over the next several months, outside forces will seek to highlight the areas where Republicans disagree rather than the opportunities for us to come together. Democrats will try to exploit our divisions to weaken us, and the media will sell controversy for headlines and clicks. We won’t let these forces distract us from the mission that we know is paramount – to re-elect Senator Ron Johnson, defeat failed Governor Tony Evers, send a Republican to Washington from the third congressional district, and elect conservatives in local races across Wisconsin – all in our quest to defend America.

Americans are watching the failure of Democrat leadership play out in real-time under Joe Biden, and no Wisconsin governor has been weaker or more ineffective than Tony Evers. The pathway to victory is laid out before us, and while we should find solutions to our disagreements productively, we won’t allow outside forces to distract us from our fight for freedom.

As we continue to have important conversations, and focus on the conservative ideas that unite us, on August 10 we will emerge a stronger party than ever before. I look forward to more meaningful exchanges along the way and winning together in November.

Paul Farrow is the volunteer chairman of the Republican Party of Wisconsin. He can be found on Twitter at @PaulFarrowWI.