David Clarke: Why It’s Good the GOP Did Not Endorse Candidates 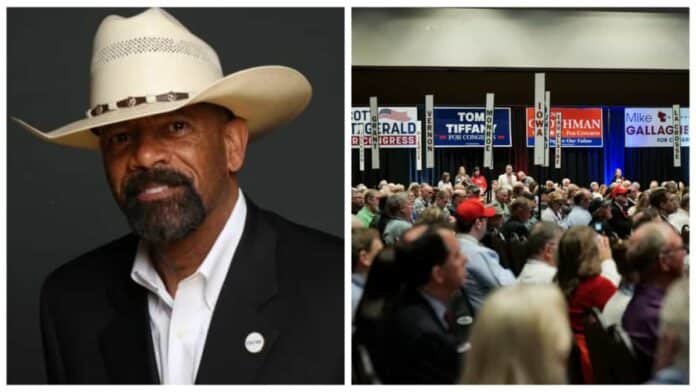 First of all, that area is right outside of Madison and is hardly emblematic of what the Republican Party stands for. The area is progressive, central, and hardly representative of a conservative mindset.

Conventions bring money into the community with attendees filling up hotels and restaurants. It would be nice for the Republican Party of Wisconsin to reward the more Republican leaning areas of the state with all of the outside money that flows in with a convention.

Among the items on the agenda was to decide whether the Party endorse candidates for numerous offices prior to the August primary election. The biggest question centered on whether to endorse one of the major and realistically viable candidates running for Governor. Although the Party endorsement is not binding on voters, it comes with perks like fundraising lists, Party offices and volunteers throughout the state. That can give one a huge advantage. It basically shuts out all the other candidates on the ballot running as Republicans.

A no-endorsement motion was put on the agenda for a vote. It passed wholeheartedly. It was advisory.

If you recall early in the governor race, Assembly Speaker Robin Vos made it clear who the Party official’s preference was when he advised a particular candidate to stay out of the race. That is anathema to the primary process. It also tells me that the message of the person wanting the endorsement prior to the primary election wasn’t convincing enough to get 60%. If your message is strong and you present a vision to the voters, they’ll vote for you.

The move to clear the field for a particular candidate who is not an incumbent before the primary election wreaks of nepotism. That the preferred candidate, who had Party officials support, did not reach the 60% threshold means one thing. A big slice of the delegate vote didn’t want an endorsement made. A particular candidate wanting the road cleared for them by the Party and not the voters tells me something else.

I have a problem with the mind-view that only a thousand Party insiders should decide who to forward onto the general election. There is a reason why we have a primary election process. It’s so that the voters throughout the state can participate in their rightful role in the electoral process. It is the voters who are enfranchised. The Party plays a role, but they need to make sure that the voters in the primary are not shut out and instead are handed a select list of people to vote for. That is called the general election.

The Primary should be as open a process as it can be so that voters, many of whom do not belong to the Party and vote Republican, assume their rightful role in a republic. Also keep in mind that some voters who call themselves independent do not involve themselves in Party politics but vote Republican. What if both groups do not approve of a candidate who is endorsed by the Party before the primary?

The Party should ensure that the process be as open as possible for the voters to decide in August. To not do so tacitly disenfranchises voters. Voters deserve several people to choose from. I don’t want to be told who to vote for by a political party until the general election in November. And then sometimes, not even then.

Candidates should not fear others getting into the race. Convince the voters. Don’t convince people to stay out of the race. Primary elections can be messy. So what? Democracy can be messy too. There is nothing wrong with an intra-party fight to determine who gets nominated for the general election.

The problem was that the voters in state primary elections throughout the country thought otherwise. Trump kept winning states. And delegates. Even after securing enough delegates to ensure the nomination, Party operatives at the Republican National Convention tried to advance a movement on the floor to deny Trump his rightfully secured nomination by opening up the process again and allowing delegates committed to Trump to vote for someone else. What if that motion had succeeded?

We would have had no President Trump. Think about that. Once Wisconsin voters have had their say at the polls in the August primary, then and only then, should people be convinced to coalesce around one person. Not before.

David A. Clarke Jr. is President of Rise Up Wisconsin Inc. He is the former Milwaukee County sheriff.