Murder Victim’s Family to GOP Senators: ‘We Are Crying Out for Help…Do Your Jobs’ 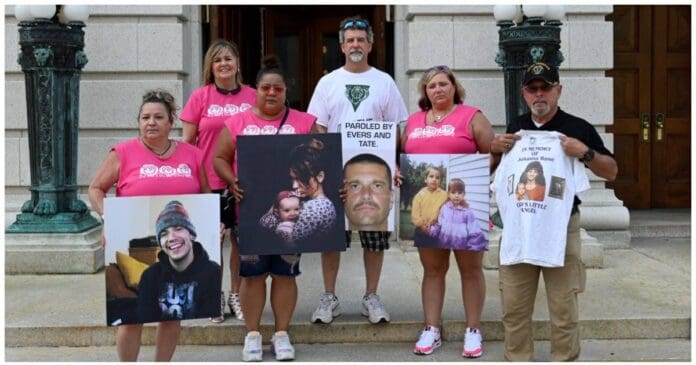 “We are crying out for help…HOW CAN YOU SIT BACK AND DO NOTHING!!!!”

That is the message that murder victim Johanna Balsewicz’s sister, Karen Kannenberg, has for state Senators who could call a vote to fire Tony Evers’ Parole Commission Chair John Tate – but haven’t.

“WE ARE HERE TO FIGHT FOR WHAT’S RIGHT,” Kannenberg told Wisconsin Right Now. “Stop putting your commercials on TV about crime and passion for the people if that’s really not who you are. Put the politics out of this devastating story and show us you really care about the people and not your power and money.”

Other family members of Johanna feel just as strongly.  “I am asking, pleading, begging that the senators call a meeting to fire John Tate ll,” said Kim Cornils, another sister of Johanna. “The senators need to put THE PEOPLE first before worrying about their election coming up. Understand you are where you are for the people… Call this meeting so Governor Evers and John Tate II can’t do what they promised, empty the prisons by 50%. Do your jobs, Senators!”

Republicans control the state Senate and could call the vote without a single Democrat participating. But Republican Majority Leader Devin LeMathieu is refusing to call the vote to hold Evers’ nominee accountable for his now rescinded and much-decried decision to release convicted wife killer Douglas Balsewicz early.

“HOW CAN YOU SIT BACK AND DO NOTHING!!!! Sen. Devin LeMathieu, you could call the vote to fire John Tate II but you won’t. WHY????” asked Kannenberg. [LeMathieu previously told Wisconsin Right Now that he believes it helps Republicans more politically to not fire Tate, who has never been confirmed despite being nominated in 2019 and 2021. Gov. Tony Evers could also fire Tate, but he has not.]

State Sen. Roger Roth, also a Republican, has circulated a petition to force the vote. He needs 17 votes by Tuesday. He has 6 including himself:

Those signing the Roth petition are:

Those who have not signed the Roth petition are:

Senator Kathy Bernier said she is “Inclined’ to sign the petition.

“Fire John Tate II before he makes another state,” Kannenberg said. “Our family is reaching out to all senators who have not responded to messages or phone calls to force a legislative vote to fire John Tate II.”

To state Senators who have signed on, she said, “Thank you…Our family appreciates your positive support with wanting to fire John Tate II and we can feel your passion for the PEOPLE.” To those who have not, she said, “You all need to look at all the pain our family has endured AGAIN these last 10 days after learning our nieces/sister/aunt’s wife murderer was given a parole grant to be released from prison after serving only 24 years of an 80-year sentence for a brutal stabbing of a human being in front of Johanna’s two children. ”

Kannenberg also called on Evers to fire Tate. “Thank you Governor Evers for your help in rescinding the horrible parole decision by John Tate II to release Douglas Balsewicz early from his 80-year sentence,” she wrote.  “You yourself told our family there were mistakes made. BUT, that was only half your part. Our family wanted you to fire John Tate II and now, AGAIN, we have heard nothing. OUR FAMILY IS NOT GOING AWAY.  WE NEED JUSTICE FOR OUR FAMILY AND JOHANNA ROSE.”

She concluded, “How many other families are grieving like ours because of an early release by John Tate II?  How many other families will be going through what we have been going through these last 10 days if John Tate II  remains in office.  He needs to be fired, and NOW. John Tate II refused to call any family member to let us know of the early release.  NOT EVEN JOHANNA’S DAUGHTER NIKKOLE WHO LIVES 15 MINUTES FROM WHERE DOUG IS INCARCERATED. Could you imagine her or any one of us running into him at the grocery store not knowing he was being released early!!!!”

Here are the other statements from Johanna’s relatives, who are also demanding a vote.

“As many of you know, murderer Douglas Balsewicz, who stabbed his soon to be ex-wife 42 times in front of his 2 and 4-year-old after breaking into her home and waiting patiently in her basement for her to go to bed, was set to be released May 17, 2022. This would have let him out without doing at least half of his sentence. Our family was not notified of his move to minimum security prison or of his release in a timely manner.

Parole Commissioner John Tate II only rescinded at the urging of Governor Evers. John Tate blatantly refused to answer a week-long of phone calls from the family and even rescinded to the media instead of telling the family first! This is a slap in the face to victims and their families in Wisconsin! I strongly urge you all to call a special session to fire John Tate II! If he made mistakes with our family, there’s no telling what other mistakes were made! He does not deserve to keep his job after such gross negligence! Our family and other families of victims deserve better, and we have lost faith that John Tate II can properly do his job! Should these type of releases be continued, the streets of Wisconsin will remain unsafe and a lawsuit will be waiting to happen. I implore you all to remember the oath you all took as Senators! To be fair and just! This is not justice! Firing Tate is justice! Make the right decision!!”

“After weeks of reliving the worst day of my life, the Wisconsin Senate has picked up where John Tate has left off. Instead of firing the man who put this family through hell, partisanship again is stopping justice from being completely realized. John Tate deserves nothing more than to be fired now to keep him from making more bad decisions and hurting other families like ours. Do your jobs and make the right decision today. Fire John Tate and end this nightmare. Michael Binder, Brother of Johanna.”

“I am asking that an extraordinary session be called to remove John Tate from a position in which he was put in to protect the public. We look to our officials and put trust in them to make the right decision. John Tate was going to parole a man who viciously murdered his wife and only served 24 of a 80-year sentence. He was going to do this without contacting the family of the victim to see how we felt about it. He was going to release a man into the public with no concern for how the community would feel with a murderer living beside them. He is very outspoken when it comes to his views on defunding the police yet signs papers saying parolees will be carefully monitored. Answer me this…. Who’s going to be watching these violent offenders when he makes good on his promise to release 50% of the prison population? We already have an uprise of homicides so why add to the problem.

John Tate did rescind Douglas Balsewicz’s parole but only after receiving a letter from Governor Evers. Our family has yet to hear from him personally, we only found out about this decision through a third party. To me, that sounds like a coward, definitely not someone the public can trust. He made a statement that he did not want to reverse his decision because he feared the murderer would sue him. So he’s more concerned about his pockets than he is about the safety of our community? Is that the message you choose to send to the public?

The family of Johanna Balsewicz is asking that you for once look at it from a victim’s stand point. We are here fighting not only to give JoJo her voice back but to give those voices back to every victim and their families. We will not stop until justice is served. This is your chance to rebuild the faith of your community, to say to us that you apologize for putting John Tate in that chair. That victims do matter!!! #justiceforjojo.”

“I am calling on the senators to bring an extraordinary session to call on John Tate II to be removed/ fired from his Parole Commissioner seat. He has proven time and time again that he does not take his job seriously.

If he had he would not have made the huge mistake in paroling a violent vicious killer as he did with Douglas Balsewicz.  He then rescinded after Governor Evers wrote him a letter going against it.

I am the survivor of the victim Johanna Rose Balsewicz. My sister who was sliced and stabbed 42 times in front of her children by the hands of Douglas Balsewicz no longer has a voice. We will as a family use our voice for her.

Johanna: ‘I completed college and graduated the medical assistant program. Supporting my children after a sought-after divorce was my goal. I didn’t have the opportunity for after my graduation. The day of our first divorce hearing and Douglas’s 30th birthday, he snuck into my home, stabbed me repeatedly with my children next to me in the bed. Over 20 stabs to my face and neck and 20 more others to the rest of my body. I was defeated and killed. My children were left for at least 8 hours with my dead body!!! Only to travel out of the house in the morning to find help. Blood soaked. With my blood. Knowing what their father Douglas Balsewicz had done to their mommy.’

As her sister, I know for a fact this is what my sister would be saying.

I am appalled as to how John Tate has handled his position in office. Paroling a man that viciously attacked and killed his wife. Sentenced to 80 years and was going to be released after 24. Sickened of the thought as to did Tate even take Judge Sykes’ recommendation into consideration when she stated Douglas Balsewicz would not be a candidate for early release? Not only that but we were not even informed that he was being paroled. We found out from word on the streets.

My family and I contacted Tate but to no avail. We never heard from him.

It angers me Tate had the audacity after making the decision to parole Douglas Balsewicz publicly comment that the family wanted him to rescind this parole ‘we should not be doing this out of vengeance’!!!! I am asking, pleading, begging that the senators call a meeting to fire John Tate ll. The senators need to put THE PEOPLE first before worrying about their election coming up. Understand you are where you are for the people. ME!!! You are there to also keep our streets safe and us the PEOPLE safe. If you don’t call this meeting, what makes any of you any different from Tate.? Do your jobs!!! You work for us.!!! Call this meeting so Governor Evers and John Tate II can’t do what they promised, empty the prisons by 50%. It’s proven they mean vicious violent killers among their 50%. The same violent criminals that get Sentenced to 80 years and only served 1/3 of their time. Call the meeting. Get Tate out!!! Do your jobs, senators!!!”