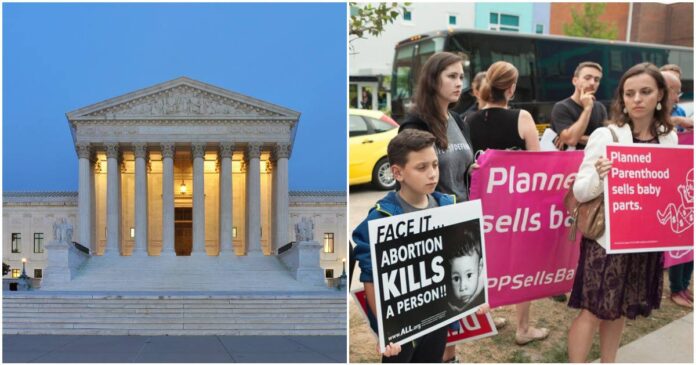 The opinion was first leaked to the national Politico site. You can read it in full here:

According to Politico, the draft opinion was circulated inside the court. It’s exceptionally unusual and a dramatic breach of protocol for a draft SCOTUS opinion to leak.

“We hold that Roe and Casey must be overruled. The Constitution makes no reference to abortion, and no such right is implicitly protected by any constitutional provision,” reads the bombshell draft opinion, which if enacted would represent one of the most monumental SCOTUS decisions in history.

Politico noted that draft opinions are just that; they are drafts. That means they are subject to change. Sometimes people change their votes or new drafts are written. According to Political a final decision is expected within about two months.

However, according to Politico, Clarence Thomas, Neil Gorsuch, Brett Kavanaugh and Amy Coney Barrett have sided with Alito in siding against Roe. The site says that Stephen Breyer, Sonia Sotomayor and Elena Kagan are against the decision, and John Roberts’ position is not clear.

The right to abortion does not fall under the due process clause of the Fourteenth Amendment,” reads the opinion, which says that abortion should be left to the states.

“Until the latter part of the 20th century such a right was entirely unknown in American law.”

Roe was “egregiously wrong from the start,” it says.

“Its reasoning was exceptionally weak and the decision has had damaging consequences. And far from bringing about a national settlement of the abortion issue, Roe and Casey have enflamed debate and deepened division. It is time to heed the Constitution and return the issue of abortion to the people’s elected representatives.”

The opinion noted that for the first 185 years after the adoption of the Constitution, each State “was permitted to address this issue in accordance with the views of its citizens.”

Then, in 1973, the Supreme Court decided Roe v. Wade “even though the Constitution makes no mention of abortion.” The court “held that it confers a broad right to obtain one,” says the opinion.

The opinion notes, “It did not claim that American law or the common law had ever recognized such a right and its survey of history ranged from the constitutionally irrelevant (e.g. its discussion of abortion in antiquity) to the plainly incorrect (e.g. its assertion that abortion was probably never a crime under the common law.)”

The state of Mississippi asked the court to uphold the constitutionality of a law that generally prohibits an abortion after the fifteenth week of pregnancy, several weeks before the point at which a fetus is now regarded as viable outsides the womb, the decision says.