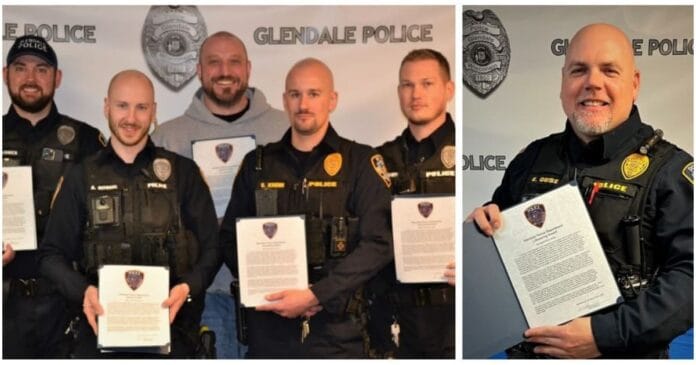 Officers of the Glendale Police Department were recognized for their actions during a water rescue of a man who drove his car into the Milwaukee River.

Glendale Police say on April 10, 2022, a witness reported that a car drove down a bike path and into the Milwaukee River near Lincoln Park. Officers went into the water and retrieved the man from the submerged car. Officers immediately started CPR, and the driver was rushed to the hospital. He is expected to survive.

Three officers were taken to the hospital to be evaluated for hypothermia. The water temperature was reported to be 40 degrees.

According to a statement released by Glendale Police, officers were recognized for their brave and decisive actions during the incident. Officers Robert Wilson, Jaimie Byrnes, and Andrew Reischl were presented with the Award of Valor for rushing into the frigid Milwaukee River to free a man who was trapped in his vehicle and pulled him to shore. Sgt. Guse, Det. Krenn and Officer Smith were presented with the Lifesaving Award for immediately beginning CPR on the unconscious subject and continued to render aid until they were relieved by members of the North Shore Fire/Rescue Due to the actions of all on scene, the subject was revived and is expected to survive.