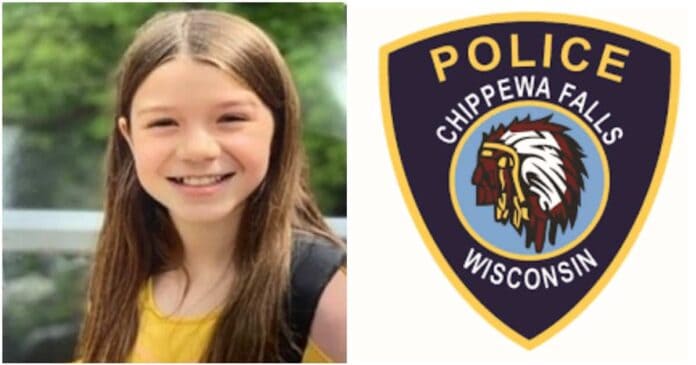 A homicide investigation is underway. No one is currently in custody in connection with the incident and there are no known suspects.

The body of a 10-year-old girl reported missing from Chippewa Falls, Wisconsin, has been recovered, police said Monday. Investigators believe she is the victim of homicide.

According to the Chippewa Falls Police Department, Illiana Peters was last seen by family Sunday evening. Lily’s father called police at 9 p.m. after she had not returned from visiting with her aunt in the 400 block of North Grove St.

Illiana’s bicycle was located a short distance from her aunt’s house, near a walking trail between the end of North Grove Street and the Leinenkugel Brewery’s parking lot.

During the update Monday afternoon, Chippewa Falls Police Chief Matthew Kelm reported that Illiana’s body was found at about 9:15 a.m. Monday morning near the walking trail.

Kelm reported a homicide investigation is underway. Kelm stated no one is currently in custody in connection with the incident and there are no known suspects.

Kelm urged residents to maintain a state of vigilance, as the child’s death is being investigated as a homicide and “there may be a danger to the public.”

“The simple fact is that we have not yet made an arrest in this case. We just want to be extra vigilant,” said Kelm.

Chippewa Falls police requested mutual aid for multiple agencies to assist with the search, including K9 teams and drone operators.

If anyone has any information, they’re asked to call the Chippewa County Dispatch Center at 715-726-7701.

Good afternoon and thank you for coming. My name is Matthew Kelm and I am the Chief of Police for the Chippewa Falls Police Department. This is an update on the Missing Persons case that was first reported last night.
At about 9:00 pm last night, the Chippewa Falls Police Department received information that Iliana (Lily) M. Peters, age 10, was missing from the City of Chippewa Falls. Lily’s father reported that she had not returned home from a visit to her aunt’s house in the 400 block of N. Grove Street. Officers later located a bicycle in the woods near the walking trail between the end of N. Grove Street and the Leinenkugel’s brewery parking lot. Numerous agencies and resources were called to assist with the search for Lily.
At about 9:15 am this morning, a body was located in the wooded area near the walking trail in that area. The Chippewa County Coroner’s Office has now confirmed this is the body of Lily Peters. At this point we are considering this a homicide investigation. We do not have anyone in custody and are continuing to follow up on multiple leads.
Chippewa Falls Police Department and the numerous assisting agencies will be working diligently on this case. We encourage anyone with information to please contact the Chippewa Falls Police Department and to maintain a state of vigilance as there may be a danger to the public.
To maintain the integrity of this very active and ongoing investigation, I am unable to provide further details at this time. I anticipate an additional press conference tonight at 5:00 pm. We would like to extend our deepest sympathies to the family and friends of Lilly Peters during this tragic time. Thank you.
If you have ANY tips, please call 715-726-7701, select option 1.
Share
Facebook
Twitter
Pinterest
WhatsApp
Previous articleElon Musk to Buy Twitter for $44 billion
Next articleGlendale Police Officers Recognized For Bravery During River Rescue [WATCH BODY CAMERA VIDEO]