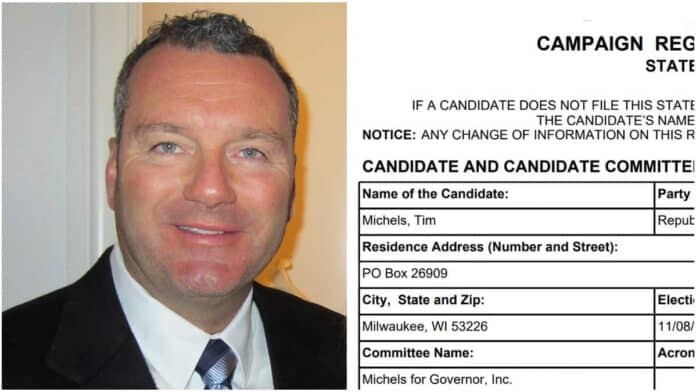 Wisconsin Right Now has learned that Tim Michels, who filed the registration form needed to run for Wisconsin governor as a Republican, has made a nearly $1 million television ad buy that will start running throughout the state next week.

According to a GOP source, the Hartland businessman and co-CEO of Michels Corp., has purchased $980,000 in television advertisements for next week. Michels is a multi-millionaire who is able to self-finance his campaign.

We obtained Michels’ campaign registration statement from the state. You can see it here: CF-1 Campaign Registration(2)

It says that he is running as a Republican for Wisconsin governor and gives his campaign treasurer as Bradley Crate. Michels helps run a major family-run construction company. He previously ran for U.S. Senate against Russ Feingold.

The filing makes clear what has been rumored for weeks; that Michels is running for governor as a Republican.

The other Republican candidates in the race are former Lt. Gov. Rebecca Kleefisch, former Marine Kevin Nicholson, and former state Rep. Tim Ramthun. They are seeking to square off against Gov. Tony Evers.

The Michels’ ad buy is not occurring in a vacuum; it means the ad wars have started.

The Kleefisch campaign is already TV and been since March 28; her campaign just went up with a television ad this week, and it was a six-figure buy, a source told WRN. Her campaign declined to comment. There’s also been television ad spending for former Marine Kevin Nicholson through a PAC.

We have reached out to the Michels, Kleefisch, Nicholson, and Ramthun campaigns for comment,