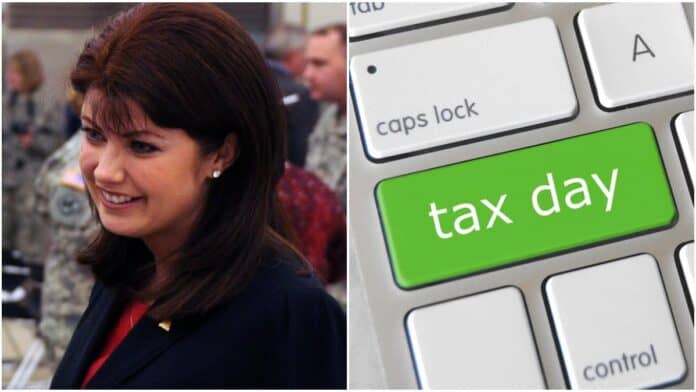 On Tax Day, millions of Wisconsinites will again be asked to pay too much by a government that is still too big. While the prices of everyday necessities put our checking accounts in crisis, the heavy hand of government wants to force us to pay for an overgrown bureaucracy we don’t need and can’t afford.

Wisconsin has a history of over-taxing – we’re home to the nation’s first progressive income tax. Thankfully, Republicans have also made history by cutting our taxes over the past decade, giving Wisconsin families needed relief. But it’s clear that more needs to be done to let Wisconsinites keep more of their own money during the inflationary times in which we live.

Let’s be clear: Tony Evers wants to raise your taxes and make things even less affordable. He doesn’t care that your family’s cost of living is rising. He wants to take more of your money to fund a government he wants to grow. One of his first acts as governor was to veto an income tax cut targeted toward middle-income families. He followed it up with a budget that included one of the largest tax increases in state history. His second budget was even worse until Republicans in the Legislature blocked his job-killing tax hikes from passing.

If Tony Evers had his way, rising costs would hit Wisconsin families even harder. Evers wanted to raise the price of gas by 36%. He tried to jack up taxes on Wisconsin farmers and manufacturers – a move that would have certainly led to increased costs for you. At every turn, Tony’s taxes would have made life harder for Wisconsin’s families. Thank goodness for Republicans willing to stand in his way.

It is still not enough. Conservatives in this state have lots to be proud of with their major tax cut wins during the last decade, but there is more work yet to be done. In 2019, Wisconsin’s income tax burden was still the 13th highest in America as a share of personal income. Stopping Tony Evers from doing more damage is important, but we need to offer Wisconsinites a hopeful vision of how we will make life more affordable by allowing people to keep more of their own money.

As governor of Wisconsin, I promise that I will make transformational income tax reform my priority. We can start by eliminating the state’s taxes on retirement income. We want Wisconsinites to pick our state for their future, not Florida or Arizona. A recent report called Wisconsin one of the “least friendly” states for retirees. That has to change.

We also need to level the playing field with the states around us. Wisconsin competes in a midwestern tax environment where many of our competitors have lower income tax rates. The top rate in Illinois is 4.95% In Michigan, it is 4.25%. Iowa has just passed a law lowering its rate to 3.9% and Indiana is on its way to 2.9%. Meanwhile, Wisconsinites are paying as much as 7.65% of their income in state taxes.

Wisconsin is also struggling with a workforce crisis exacerbated by a less attractive tax climate. We compete directly for talent with our neighbors in states like Iowa and Indiana. We must prioritize looking at ways to make our taxes more competitive if we want to keep and attract the best and the brightest minds. No tax cut option should be too bold for us to explore as a state.

The best way to keep life in Wisconsin affordable is to let people keep more of their own money. Tony Evers has shown that he could care less about what you pay and what the government takes from you. He wants your money to grow government and to control more of your life.

At the end of the day, I’m still a mother on a budget. I understand that price hikes on things like gas and groceries are imposing enormous burdens on middle-class families. As Governor, I will always work to put more money in your pocket by cutting state taxes and working to lower the cost of living in Wisconsin.