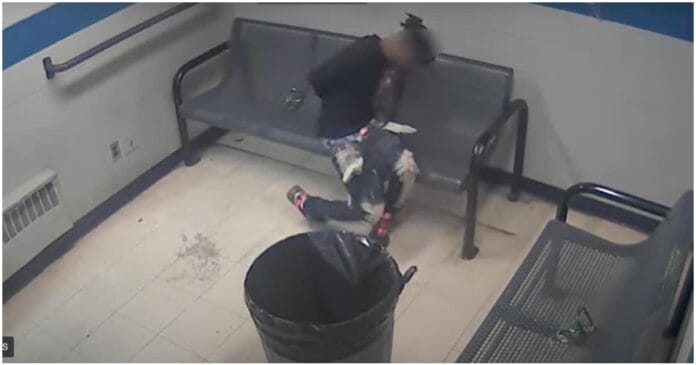 “I don’t want to go to the hospital. I should be okay,” said Keishon Thomas.

Newly released Milwaukee police bodycam videos show a man arrested on a warrant, Keishon Thomas, taking what police say were illegal drugs from his buttocks area, ingesting them, lying about it, and insisting he didn’t need to go to the hospital.

A second video shows his friend, Darreon Parker-Bell, walk into the District 5 police station after Thomas’s death and open fire at an officer who hides behind the counter to escape the gunfire.

See the videos later in this story. 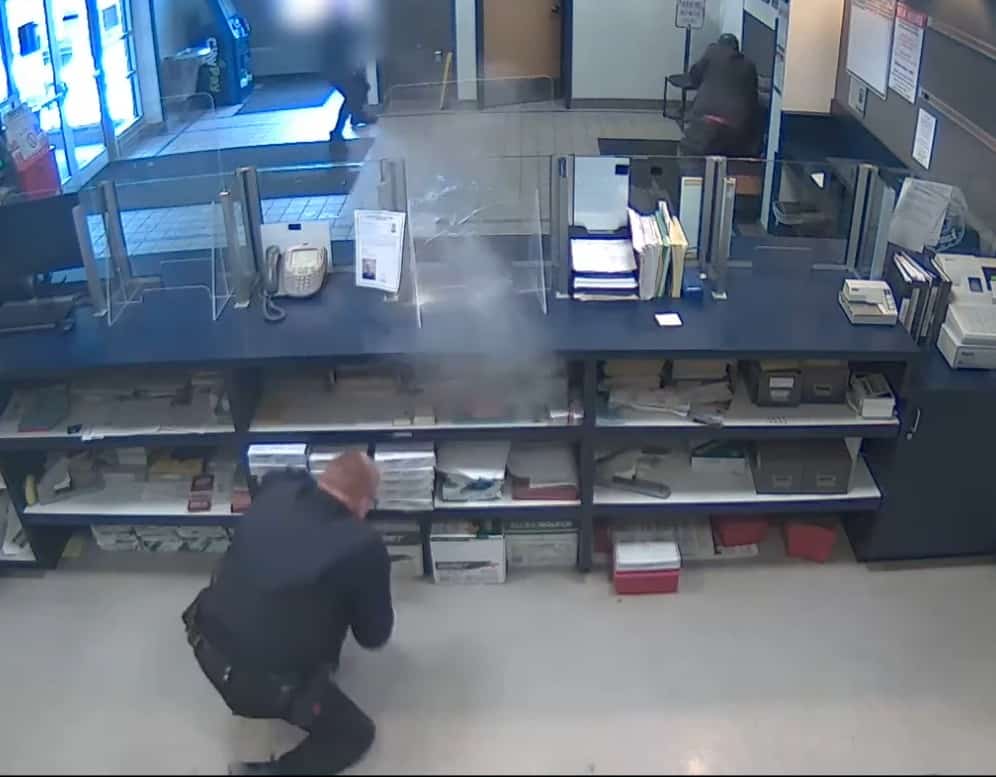 Keishon Thomas died after he was found not breathing in a holding cell in district #5. The cause of death is pending. Although the videos, which were released on April 8, are edited, what we’ve seen thus far appears to show the key moments.

Keishon Thomas’s family and some members of the community immediately rushed to judgment against police. When he suspended the officers, Police Chief Jeffrey Norman told WISN-12, “Learning certain things as this process goes on, Yes, I am concerned. There is some concerning things.” You can read MPD’s booking procedures here 090-PRISONERSANDBOOKING1.

The department pitched the videos as a community briefing.

In the videos, you see officers approach Keishon Thomas with great respect as he repeatedly lied to them, ingested and hid drugs behind their backs, and downplayed how much he took. They gave him a standard questionnaire and questioned him in depth. He continued to lie. A booking officer contemplated sending him to the hospital, but he did not want to go, and the officer did not send him. That’s likely an angle that investigators are reviewing.

MPD booking procedures online, dated from 2017 say, “ Emergency physical illness shall include those instances when an officer believes that the person in custody has recently taken what appears to be a controlled substance, especially in cases where it appears that the person has attempted to dispose of the substance by ingestion. If a prisoner puts something in his/her mouth that the member believes may be a controlled substance, this shall constitute evidence of ingestion and the prisoner must be medically cleared prior to booking.”

The fact the chief put the officers’ on “full suspension” is an unusual response; usually, officers are put on administrative duty as standard protocol in such situations.

The second video released by MPD shows a friend of Keishon Thomas’s, Darreon Parker-Bell, allegedly firing a gun in the District 5 police station. Police say he then refused officers’ orders outside the station to drop his gun but instead pointed it at officers. They shot him; he survived, and he’s been criminally charged. Those officers, the videos reveal, are on administrative duty. We previously revealed how Parker-Bell expressed upset about Keishon Thomas’s death on social media.

In the first video, about the in-custody death of Keishon Thomas at district 5, Inspector Shannon M. Seymer-Tabaska shared information regarding the “death of a citizen within police custody” on the evening of Feb. 23, 2022. The death occurred in a temporary holding cell at the station. The video did not name Keishon Thomas, but he has been widely named in the news media.

Police released this photo of the cell that they said Keishon Thomas was in when he “became despondent.” 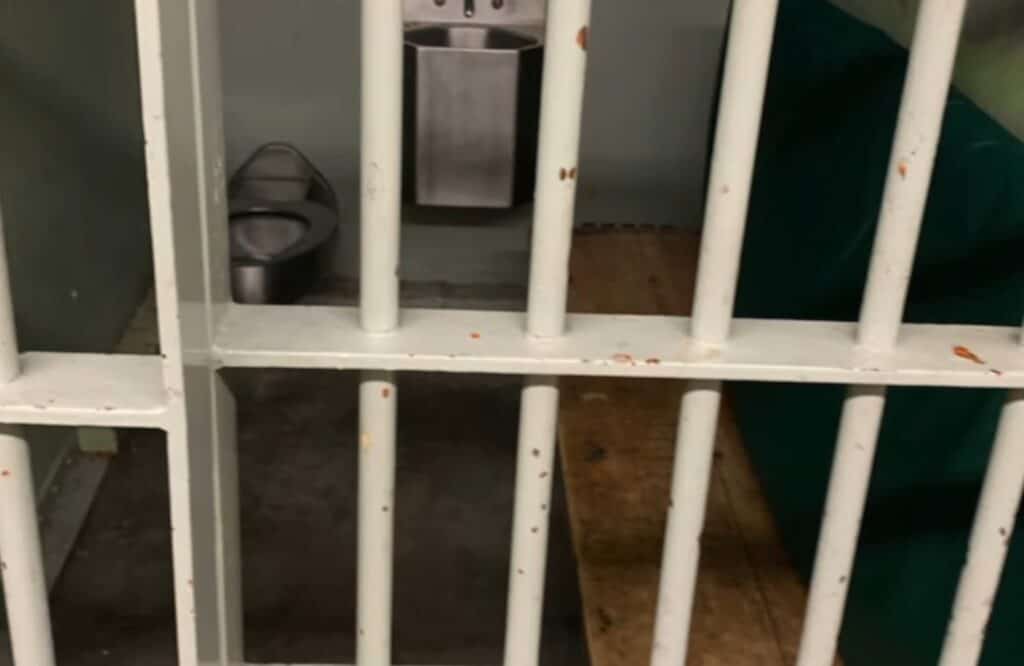 The video gives these details: Police contact with Thomas was initiated during a traffic stop in the early morning hours in the 2000 block of W. Capitol Drive. Officers conducted the stop for a moving traffic violation. They found Thomas and an adult female passenger inside the car.

The driver, Keishon Thomas, was taken into custody for a Milwaukee County Sheriff’s Department warrant, and narcotics were recovered from the driver, Thomas. He was cooperative and was detained without incident or force, according to Seymer-Tabaska.

The video then showed the initial traffic stop.

It shows an officer walking up to the vehicle near a Walgreen’s store. “Hello sir,” the officer says. The officer says he stopped him for failing to signal. The officer saw him put his hazards on and asked if everything was okay. Thomas says the woman tried to grab his phone. He said he had no ID. The officer got his name.

The officer cordially refers to Thomas as “boss” in the video. The officer went to his car and then came back and asked Thomas to step out of the car and put his hands behind his back. He then handcuffed him. The officer told him he had a warrant. He was transported to district 5 for further processing.

Officers conducted another search, and as the officer reached into his left pants pocket, Keishon Thomas lunged forward and attempted to ingest a rock-like substance believed to be illegal narcotics, Seymer-Tabaska said.

“Alright, so there’s one rock. Where’s the other one?” said an officer.

A large quantity of illegal currency and illegal marijuana, meth and cocaine were removed from the subject’s person, said Seymer-Tabaska.

You then see that on video.

Thomas says, “But honestly, I only had one piece. She shared with me. My auntie. That got out of the car,” Thomas said.

The officers said they were the same age. He insisted the woman was 41.

Thomas said he “came from gambling with my cousin,” to explain the money.

During the booking process, Thomas was seated and handcuffed in the temporary booking room when he reached into his buttocks area and removed a packaged white substance believed to be narcotics that he placed in his mouth and began ingesting, according to Seymer-Tabaska.

He then removed another package from his buttocks area but dropped it and tried to retrieve it with his foot. He then tried to conceal it under the garbage can in the room, she said.

You can see this in the video as Thomas sits on a metal bench by himself.

A routine medical questionnaire was given to him, and he appeared to be alert, she said.

Thomas indicated he had ingested one rock and one ecstasy pill, and the booking officer said he should go to the hospital, she said. Thomas refused medical. The booking officer asked if he had physical injuries. Thomas said he had a mark from the handcuffs, she said.

In the video, the booking officer asked Thomas if he was dizzy, and how he was feeling.

The officer asked if he was feeling bad, was inebriated and was “a little high.”

“Yeah, I am a little high,” Keishon Thomas said. He said he wasn’t dizzy. He was asked about his heart rate.

The officer probed on how much crack and ecstasy he had and what else, and Keishon Thomas said weed.

The officer said, “Uh one rock and then the one ah one ecstasy pill. If you had more, be honest, you’re not going to be in trouble, I just need to know while you’re here with us, I may need you to the hospital just to check all your vitals. To make sure you’re okay. Being high is one thing. I don’t care.”

Thomas said, “I had a lot of dope and two ecstasy pills. I had a lot.”

The booking officer asks, “You had a lot? I think we should send him to the hospital.”

“Should I ah get an ambulance here?” asked another officer.

“I don’t want to go to the hospital. I should be okay,” said Keishon Thomas.

“I know you don’t want to but…Like how many ecstasy pills did you have? Did you shove some in your mouth?” asked the officer.

“I think one and a half,” said Keishon Thomas. “The ones I threw away in the napkin aren’t pills at all.”

The booking officer pressed him and asked if he was being honest that he had one rock, one and a half ecstasy pills and weed, hours before they stopped him.

He asked if Thomas had “nothing since they stopped you.”

Thomas lied and said he hadn’t. He was placed in a cell to await transport to the jail.

“During a cell block check, the booker noticed he wasn’t breathing and entered the cell to check his welfare and then summoned assistance,” Seymer-Tabaska said. CPR was attempted.

In the video, an officer runs out of the cell and says, “get in here,” as multiple officers rush in. One brings up Narcan. The other says he will get “medical” on the radio.

She said Keishon Thomas’s cause of death is unknown and under investigation.

This investigation is ongoing and led by the Milwaukee area investigative team with the Waukesha Police Department as the lead agency.

“The officers were placed on full suspension,” she confirmed, adding that the case will be presented to the DA for a review upon its conclusion.

The second video is of the related officer-involved shooting in which a friend of Keishon Thomas’s is accused of shooting up the district 5 police station.

At 3:03 p.m., Parker-Bell entered the District 5 police station, and surveillance video showed he walked through the lobby and up to the counter where he was greeted by a uniformed officer assigned to desk duty. He inquired about an investigation. The officer couldn’t provide information, said Sarnow. The video doesn’t explain which investigation.

Parker-Bell pulled a handgun out and discharged one round into the ground, Sarnow said.

Three civilians were in the lobby within several feet. They attempted to hide. The officer took cover behind the counter.

Parker-Bell took several steps backward. The officer slowly attempted to stand up when Parker-Bell fired a second shot toward the officer, nearly hitting his head and shattering the glass partition in the process, Sarnow said.

An officer fired back. The subject left the station.

“I got shots fired up in district,” an officer said on the radio.

Officers located Parker-Bell behind a residential home still armed with a firearm, said Sarnow. He refused verbal commands to relinquish the firearm and instead pointed it at officers so several officers fired at him, according to Sarnow.

He sustained multiple gunshot wounds and was treated on the scene and taken to a hospital. A gun was recovered next to him. The casings matched the casings in the district station.

These officers were placed on administrative duty, which is more standard. Parker-Bell was released from the hospital and charged with attempted first-degree intentional homicide.