The DA’s office is claiming MPD “mutually agreed” not to pursue a search warrant of the house where the mayor’s brother hid out from police.

Milwaukee County District Attorney John Chisholm admitted through a spokesman that his office rejected a search warrant sought by Milwaukee police to search the residence on N. 41st St. where Mayor Cavalier Johnson’s felon brother was holed up in a shooting investigation on March 29, with the mayoral election looming.

Earlier this week, Wisconsin Right Now broke the news that Chisholm’s office had rejected the warrant. Law enforcement officers told us the decision frustrated and angered rank-and-file officers, who considered it unusual, especially for such a serious felony case; the warrant would have allowed officers to search the Allen Addison hide-out for additional occupants and for evidence. However, Chisholm’s spokesman now claims that MPD “mutually agreed to not pursue the search warrant.” Sources told us there were other occupants inside the house with Addison.

We asked spokesman for Milwaukee police, whether that was true.

“Ultimately, the search warrant was not approved and we withdrew our request. We continue to work with the Milwaukee County District Attorney’s Office to address crime in our community,” he responded.

“MPD consulted with an experienced assistant district attorney, who has personally reviewed over 1,000 search warrants with law enforcement officers, and in the collaborative process that generally occurs with a search warrant review, the prosecutor provided feedback regarding the lack of sufficient evidence connecting the premises on 41st Street to Addison himself and to the charged criminal offenses against him from over two months earlier. After further discussion, the MPD investigator and the prosecutor mutually agreed to not pursue the search warrant. Neither John Chisholm nor the assistant district attorney who consulted with MPD about the search warrant were aware of the relationship between Allen Addison and Cavalier Johnson until after the media reported it late last week.” 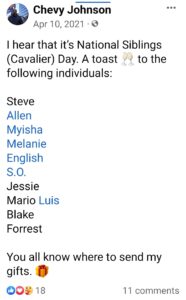 Both Addison and Johnson are open about their sibling relationship on social media (they are technically half-brothers). One of the top visible posts on Addison’s Facebook account is a happy birthday post to Johnson, to which Johnson responded. Furthermore, Addison was wanted by MPD for two months; the shooting victim told Wisconsin Right Now that the DA’s office told him police went to Johnson’s mother’s house looking for Addison early on.

We had contacted Chisholm’s office before running the initial story but received no response. We received a response on April 6, 2022, the day after Johnson defeated Ald. Bob Donovan to become Milwaukee’s mayor.

Although the DA’s spokesman says there was a lack of sufficient evidence connecting the premises to Addision, the Milwaukee County Sheriff’s Department blacked out the address where Addison was arrested on an arrest-detention report we sought through public records laws. When asked why, the department said it was Addison’s personal address. We asked what led them to believe so and received no response.

We’ve also documented in a previous story how an Addison/Cavalier Johnson relative had previous ties to the home at 2313 N. 41st St. (their sibling referred to the now-deceased man as their uncle). Another Johnson/Addison relative used the address as a registered sex offender in the past. The brothers’ mother’s twin brother once lived next door, according to online records. A truck in the backyard has the same company logo as a truck in a selfie that Addison posted on his Facebook page. The home has a Cavalier Johnson campaign sign outside. An elderly woman who answered the door wouldn’t talk and grew angry when we brought up Johnson.

Lovern stressed that Chisholm did not personally make the decision, attempting to distance the county’s elected DA from his subordinate prosecutor’s decision. The subordinate prosecutor was not named. As DA, of course, Chisholm is ultimately responsible for all of the decisions his subordinates make, as he made clear when he was criticized for the low bail recommended by a prosecutor in his office in the Darrell Brooks’ case. “I’m not here to make excuses. I own any decision that’s made by any member of my office,” Chisholm said of the Brooks’ decision.

In this case, though, Lovern bristled at any implication that Chisholm was ultimately responsible. We asked Lovern whether Chisholm agreed with his prosecutor’s decision in the Addison search warrant case and to explain in greater detail why there wasn’t sufficient evidence, but Lovern didn’t respond. Specifically, we asked, “Does he (Chisholm) think the assistant made the right decision? Also you said there was a lack of sufficient evidence. Can you explain that more?”

The search warrant could have allowed police to interview occupants about statements Addison may have made and consider whether anyone illegally harbored a fugitive. It also could have allowed them to look for gun or ballistics evidence, a cell phone, computer, or other electronics and the like. The criminal complaint indicates officers have casings from Addison’s truck but not the gun.

The house was not searched. Addison was charged in January with serious felonies for allegedly shooting a man, Eddie Knox, in the head as well as being a felon in possession of a firearm. Knox was shot multiple times in a drive-by shooting.

A neighbor told us that Addison was holed up in the N. 41st St. house for more than two hours while multiple police officers knocked on the door to no avail; the SWAT team eventually showed up. During the standoff, the mayor’s mother was at the scene yelling, the neighbor and multiple police sources said. Some police sources said she brought up the fact her other son was the mayor.

The neighbor said she was yelling at Addison to come out but didn’t hear all of it. The shooting victim, Eddie Knox, expressed doubt that Johnson did not know his brother was wanted for two months, saying that he told the DA’s office that Addison might be at the mother’s house and he was told officers went there to check. He also said that Addison’s three children knew and the shooting spread through the family.

Cavalier Johnson has said through a spokesman that he did not know his brother was wanted or had been arrested until the day after the March 29 standoff/arrest, saying he learned about it from a social media post he won’t identify.