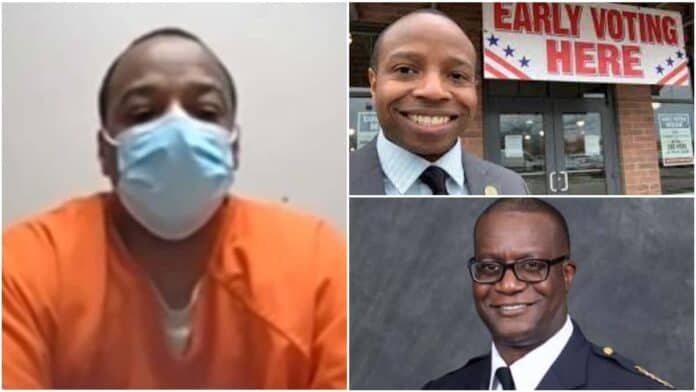 We asked Acting Mayor Cavalier Johnson’s spokesman, Jeff Fleming, a series of important questions about the mayor’s felon brother, Allen Addison, Jr., who was arrested Thursday for shooting a man multiple times and for being a felon in possession of a firearm after being wanted on a warrant for two months. Fleming initially responded to our follow-up questions, “I’m unlikely to have a chance to speak with the Mayor on this in the near term.”

Say what? Translated, that response means, “I’m not going to let Johnson answer tough questions before Tuesday’s election.” The public deserves better, and the media should demand answers.

I’ve always respected Jeff Fleming. He’s been around this city for decades as a public relations spokesman for various mayors (I used to interview him when he was spokesman for Mayor Norquist, and I was a reporter for the Milwaukee Journal Sentinel). He knows what he’s doing; but what he’s doing here is shielding the mayor from questions the public has a right to know.

The media can press for answers. They should stop being stenographers who simply repeat a politician’s press release. If all of the media ask tough questions – and they should, BEFORE the election – we might get answers.

The same is true of the Milwaukee Police Department. Their chief and the acting mayor are political allies; the latter advocated for the former’s appointment. They hold press conferences together. Thus, the department owes the public transparency on the arrest of the mayor’s brother. We aren’t getting it. Instead, we got a single statement from MPD’s spokesman, who wouldn’t even confirm the arrest: “Per department policy, information involving arrests may be obtained through the district arrest blotters.”

Not good enough. We confirmed it anyway through sources and records, but it shouldn’t have been that way.

These are the questions we want MPD to answer:

Did police tell Cavalier Johnson or anyone in the mayor’s office about the arrest? When?

Did they seek his help in locating his brother during the last two months when he was wanted on serious felony warrants? Why or why not?

Did police tell Cavalier Johnson or anyone in the mayor’s office that his brother was wanted on a warrant? When?

How did police locate Allen Addison, and where was he arrested?

We also asked for the police blotter on Addison.

It’s not the MPD spokesman’s fault; he’s a nice guy who is being directed by Chief Jeffrey Norman. It’s Norman who must answer the key questions we posed. Again, if the media demand those answers, answers will be forthcoming. It’s easy to ignore one media outlet; it’s not so easy to ignore them all.

Fleming did give some additional details after initially saying he could not talk to the mayor in the “near term.”

This is the press statement Fleming released on behalf of Johnson:

“The Mayor has been direct and upfront about his siblings. He has frequently noted he has one brother who is a warden at a state prison, and another brother who has been an inmate in that prison.

He has also stated his belief in accountability — to the community and to the criminal justice system — for those who break the law.

Cavalier Johnson brings a background and perspective to the Mayor’s Office unlike any other mayor in recent history. His experiences provide valuable insight as he addresses the serious challenges Milwaukee faces.”

We asked the critical question that not all of the media bothered to ask: Whether the mayor had seen his brother, who was wanted on felony warrants for the shooting for two months, during that time period. Fleming answered, “To your questions, the Mayor tells me he was not aware of the arrest warrant for his brother until recent days. As to his perception of police, he stands solidly behind has statement that the police play an important role in reducing crime and making Milwaukee safer.”

Fleming also followed up and revealed, “Actually, he just texted me – the last time he saw his brother was last November around Thanksgiving.”

Thus, we presume Fleming can text the mayor and ask him the rest of our questions in the near term!

Fleming added, “He did tell me earlier today that he was unaware of the warrant and the shooting until a recent posting on social media – and that posting came after the arrest in question.”

That’s frankly pretty bizarre. The mayor learned on social media that his brother was arrested in a shooting after being wanted by the cops for two months?!

It seems surprising that an acting mayor would not be told by the police that his brother was wanted for a very serious matter, a felony shooting! Why didn’t they contact the mayor for help in finding his brother? Presumably, he knew how to find him? Did he really have no idea that his brother was wanted for shooting a man in the head? Couldn’t he have helped police find Addison, since he doesn’t seem to have gone so far and Milwaukee is a pretty small place? Don’t the offices talk? We’re told by sources that typical protocol in high-profile situations is for the police administration to alert the mayor’s office.

Johnson doesn’t seem completely estranged from his brother; he says they saw each other for Thanksgiving, and his mother’s cover photo on Facebook is a picture of all of her sons together. He named his brother in a social media shout-out for siblings day.

We think Johnson should answer these follow-up questions:

Has Mayor Johnson had any contact with his brother in any way since the warrants were issued in January – and when and in what way and for what? (we would note that seeing someone for Thanksgiving is not necessarily the same thing as having no contact with that person at all.)

Where was his brother arrested?

Did Mayor Johnson know his brother’s location since the warrants were issued in January? Where was his brother staying?

We initially asked whether the mayor urged his brother to turn himself in and helped the police find him, but he explained that away by claiming he didn’t know about the shooting or warrants until after the arrest. When he learned about it, didn’t he have an obligation to let the public know?

Johnson spoke about his brother during a press conference after Wisconsin Right Now broke the story, WTMJ reported.

“I have made no secret throughout the course of my campaign about the challenged neighborhoods I grew up in. My family is no different than any other family in Milwaukee that has faced challenges. I haven’t hidden away from that. I’ve often said on the campaign trial I have one brother who has run a prison facility, and another brother who has his prisoner, his inmate,” he said.