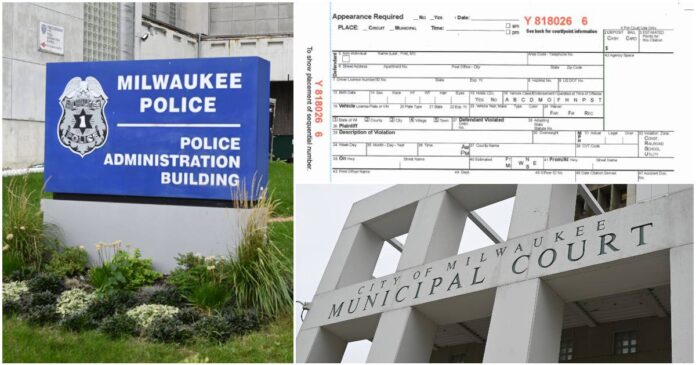 The Milwaukee Police Department lost more than 7,200 traffic and non-traffic Milwaukee municipal tickets in the system, never sending them over to Municipal Court to be prosecuted, Wisconsin Right Now has learned exclusively.

We’ve learned that this is because of a “programming issue” and that some tickets may not be valid even if they are reissued because of the statute of limitations and invalid addresses. Sources tell us that officers are being asked to re-issue the more than 7,200 tickets and send them to people’s addresses. Some officers have dozens of tickets to reissue.

Why does that matter? The tickets were handed out during an epidemic of reckless driving and violent crime (see the traffic unit’s data here). In fact, in February 2022, Milwaukee Police Chief Jeffrey Norman and Acting Mayor Cavalier Johnson touted the police department’s traffic enforcement unit, saying it was combating reckless driving by issuing tickets and holding people accountable.

“We have over 21,000 citations issued, half of which is directly related to speeding,” Norman said at that time. “Lives are at stake, and we see too much loss of life in our city due to senseless reckless driving,” said Johnson to Fox 6 at the time. “We want the public to know our expectations are high that drivers follow the rules of the road or expect consequences.”

Norman said then: “We work with the municipal court where the citation are coming. They’re saying that they’re seeing behaviors being modified in regard to that they are not seeing the type of people coming back repeatedly.”

But it turns out, as Wisconsin Right Now can exclusively report, that thousands of the municipal citations never made it from police to the court system at all.

We asked MPD about this and received a response from spokesman Efrain Cornejo.

“The Milwaukee Police Department (MPD) was made aware of a programming issue, which prevented Municipal Court from receiving citations issued by MPD members,” he told us.

“An audit revealed approximately 7,280 citations were affected. MPD is in the process of re-issuing the citations that are still within the 2-year statute of limitations for an ordinance violation. The Milwaukee Police Department appreciates the understanding of the public as we re-issue citations.”

We asked: You said the tickets were affected; what does that mean? Were they never issued to the people? What time frame do they cover? What years? Are some outside the statute of limitations?

Cornejo responded to those questions, “The citations which include traffic and non-traffic citations were issued to individuals; however, there was an issue on the transfer of the citation from our system to the Municipal Court System. No further information is available at this time as an audit report containing further details will be published in the next couple of weeks.”

Although people received tickets at the scene, the snafu means that the municipal court never received the tickets. And sources tell us that, in their experience, even though the tickets are being re-issued, many people will have moved, meaning the tickets will end up at invalid addresses. Furthermore, once issued, tickets go through an administrative review for errors, which did not happen.

Until 2018, the city of Milwaukee police deployed a “Broken Windows” strategy of law enforcement. Pioneered in New York City, it holds that cracking down on lower-level quality-of-life violations, such as public drinking, loitering, and the like, maintains neighborhood order, thus preventing larger crimes from occurring. The city presided over major crime drops with the Broken Windows strategy in place.

Since that time, new chiefs have not articulated a similar strategy. Major crimes, such as homicide, have skyrocketed to record levels in the city.