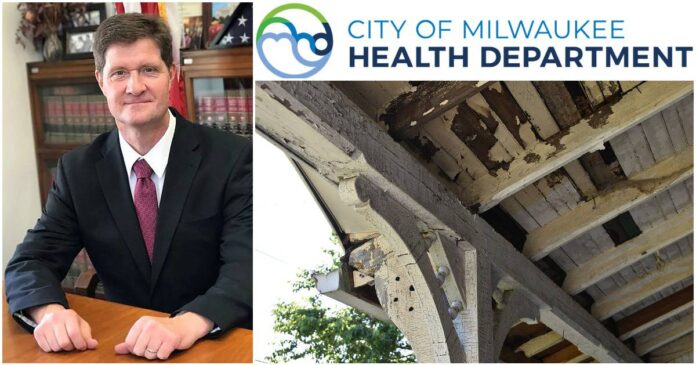 The investigation took more than three years; yet, the Milwaukee County DA cited a possible three-year statute of limitations on charges. His decision was announced in a written statement obtained by Wisconsin Right Now.

Chisholm also blamed the non-prosecution on the Health Department’s own “unreliable” records.

After the scandal first broke in 2018, ousted Milwaukee Health Commissioner Bevan Baker blamed then-Mayor Tom Barrett and other department heads for the problems in the lead program. In 2019, Fox 6 reported that Baker said that, in 2016, “he advised Mayor Barrett of the haphazard job crews were doing replacing lead laterals on the city’s north side, yet Baker said nothing was done about his concerns.” Barrett has now left town to be the ambassador to Luxembourg.

A witness told the Department of Justice that “the files within the lead program of the MHD were in complete disarray, missing, and … their [sic] appeared to be no oversight on the finances, procedures, and policies of the grant funding,” the letter from Chisholm states. “There was also no system in place for the closing of files.”

Noted Chisholm: “This was also a similar opinion to the DCI (state Division of Criminal Enforcement) agent conducting the investigation. A prosecution looking to find the truth cannot be based on unreliable records.”

The District Attorney – who is known for his high non-prosecution rate for felony crimes, acknowledges in the letter, obtained by Wisconsin Right Now, that state law mandates the City of Milwaukee Health Department to perform specific duties relating to children with elevated blood lead levels.

Yet the DA’s own letter – while refusing to press charges – admitted: “The reports by both the DHS (Department of Health Services) and MHD (Milwaukee Health Department) found after audits and a review of available records that MHD violated these mandates.”

For example, Milwaukee Health Department records showed “repeated instances where the agency knew a child’s elevated blood lead level (EBLL) and, yet, did not investigate
the child’s residence for lead exposure,” the letter acknowledges.

Here’s the state law in question:

“The other duty that is mandated by statute is that if the department determines that a lead hazard is present in any dwelling or premises, the local health department “shall … issue an order that requires reduction or elimination.”

The Milwaukee County District Attorney’s Office reviewed the investigation completed by the Wisconsin Department of Justice Division of Criminal Investigation (DCI) (which is ultimately under the authority of Democratic Attorney General Josh Kaul), “regarding the City of Milwaukee Health Department Childhood Lead Poisoning Prevention Program. Based upon that review the Milwaukee County District Attorney’s Office has determined there is
insufficient evidence to prove a crime was committed.”

The investigation started after two reports exposed problems in the City of Milwaukee’s Lead Program. The first report was dated in January 2018 and prepared by the City of
Milwaukee Health Department (MHD).

It was titled Childhood Lead Poisoning Prevention Program: Assessment of Operations and Recommendations for Corrective Actions.

The second report was from May 2018 and entitled Report on the Review of the City of
Milwaukee Health Department Childhood Lead Poisoning Prevention Program and was
prepared by the Department of Health Services, State of Wisconsin (DHS), Chisholm’s letter states.

“Based upon the information contained in both, the Wisconsin Department of Justice, Division of Criminal Investigation conducted an investigation to determine if any violations of Wis. Stat. § 254.30 occurred,” says the letter.

He said that the statutes say “a knowing violation of either of these two mandates could potentially be a crime. It is important to note, however, that the penalty for an intentional violation is an unclassified offense, meaning it’s [sic] penalty does not conform to the criminal penalties set forth in Chapter 939 of the Wisconsin Criminal Code.”

Following the statutory standard for EBLL does seem to be “a known mandatory, nondiscretionary, ministerial duty” under the misconduct statute, his letter says.

“Wisconsin Statute Section 254.11(5m), sets a specific EBLL standard. DHS reports
that MHD’s policies failed to apply this standard. Also, there were policies in place
that did not adhere to state statutes that require environmental investigations for
children who have two venous BLL’s of 15 mcg/dl taken at least 90 days apart.”

Second, MHD available records show the agency “failed to issue abatement orders as
Wisconsin Statute § 254.166(2m) requires. The DHS Report states that ‘[o]rders were not
always written when hazards were found or did not include remediation of all identified
hazards,'” the report says.

“The Wisconsin Department of Health Service (DHS) report found that the STELLAR records, which was the electric filing system used by MHD, and MHD’s paper files were inconsistent,” it says.

“Further, as a result of a lack of reliable records, there is no reliable documented evidence
that, while MHD may have stated policies that were inconsistent with the statutes, those
stated polices were set with an intentional disregard for the mandates of the statutes,” Chisholm wrote.

“While this is consistent with an overall assessment that the Childhood Lead Poisoning Prevention Program was mismanaged, that is not a crime.”

“In addition, the investigation revealed several conflicting statements from the dozens of
witnesses that were interviewed making a prosecution and conviction of any individual(s)
unprovable beyond a reasonable doubt,” Chisholm wrote.

“The investigation also included a significant review of internal emails and other
documents, which reveal actions taken by individuals in the MHD that were an attempt
to rectify apparent issues with the Childhood Lead Poisoning Prevention Program, which
would be evidence contrary to a knowing violation of the statue.”

“As a result there is insufficient credible and reliable evidence to prove a knowing violation
of Wis. Stat. § 254.30 or an intentional failure to perform a known mandatory,
nondiscretionary, ministerial duty if applicable, contrary to Wis. Stat. § 946.12.
Lastly, it should be noted that the investigation also uncovered substantial
improvement in the management of the Childhood Lead Poisoning Prevention Program
since the reports mentioned above were released, which have taken place under the
the direction of new leadership since that time at MHD.”