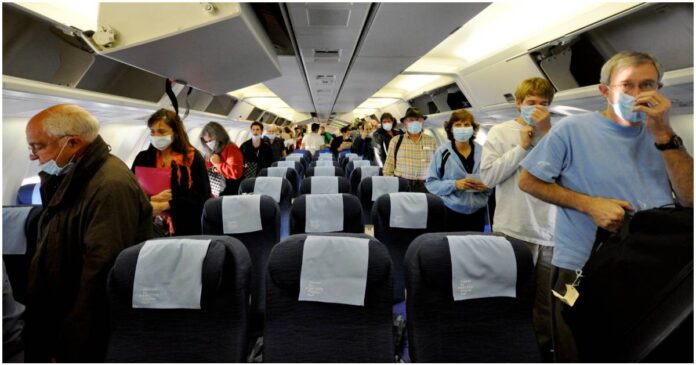 “’Sir, please put your mask on in between peanuts’ … The absurdity.” -Sen. Rand Paul

A bipartisan group of senators passed a resolution 57-40 that would repeal the federal mask mandate on airplanes and federally regulated public transit. Now that measure’s fate is in the hands of House Speaker Nancy Pelosi, D-Calif.

So far, Pelosi has not spoken publicly on the resolution, which would overturn an announcement from the Transportation Security Administration earlier this month that said the mask mandate would be extended through April 18.

“At CDC’s recommendation, TSA will extend the security directive for mask use on public transportation and transportation hubs for one month, through April 18th,” the TSA said. “During that time, CDC will work with government agencies to help inform a revised policy framework for when, and under what circumstances, masks should be required in the public transportation corridor. This revised framework will be based on the COVID-19 community levels, risk of new variants, national data, and the latest science. We will communicate any updates publicly if and/or when they change.”

That announcement was particularly controversial because CDC officials said in February that masks are no longer necessary except for those living where hospitals are overrun with patients, which means about 70% of Americans can go without masks.

“We want to give people a break from things like mask-wearing …” CDC Director Rochelle Walensky said in the February announcement.

Governors and local officials around the country have lifted their mask mandates as well, even in some of the most restrictive areas. Meanwhile, British Airways and Virgin Atlantic announced this week they dropped their mask requirement.

U.S. Sen. Mitt Romney, R-Utah, voted to keep the mandate in place while all other Republicans voted to get rid of the mandate.

“Those who work for airlines are compelled to incessantly remind paying customers not only to wear a mask while we board, but in between bites and in between sips,” said Sen. Rand Paul, R-Ky., who introduced the measure. “’Sir, please put your mask on in between peanuts’ … The absurdity.”

Paul’s measure would overturn the TSA rule through the Congressional Review Act, which gives Congress the authority to undo executive branch regulations usually within 60 days with a simple majority vote.

“…the Senate said enough is enough, and sent a message to unelected government bureaucrats to stop the anti-science, nanny state requirement of travel mask mandates,” said Paul, who is a physician. “Since March 2020, unelected bureaucrats have incessantly declared that we should ‘follow the science.’ But the same bureaucrats continue to defy science by imposing an ineffective and restrictive mask mandate for individuals traveling on public transit and airplanes. As the entire world is learning to live with COVID, the federal government still uses fear-mongering to stubbornly perpetuate its mandates, rather than giving clear-eyed, rational advice on how to best protect yourself from illness. That is why I forced this vote, and I applaud the Senate for rejecting this nonsense.”