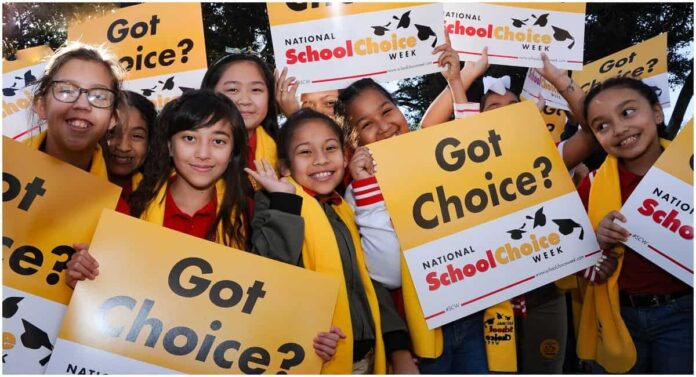 Support for school choice is robust in Wisconsin as the Great Parental Awakening grows.

There’s strong choice for expanding school choice among Wisconsin voters, and support for educational freedom crosses political lines, according to a new poll.

Although more than half of Republicans and Independents support school choice, more than one-third of Democrats did too, the poll found. It also found that 64.6% of voters want to see school choice expanded so that all parents can make their own decisions about where to send their children to school, regardless of income.

SCW released the results on education issues “in a scientific, random sample poll conducted earlier this month by one of the nation’s leading opinion research firms.”

“Parents want more options. They want to be more involved. It’s as simple as that,” said Nic Kelly, President of School Choice Wisconsin.

Strong Support Across the Political Spectrum

According to School Choice Wisconsin, the poll “showed support for school choice across the political spectrum. While strong Republican support is unsurprising, noteworthy is solid majority support among independents and sizable support among Democrats.”

SCW retained OnMessage Inc. to conduct the poll. The firm’s national recognition includes being named “Pollster of the Year” in 2019 by the American Association of Political Consultants.

“Wisconsin parents have four tax-supported options for enrolling children in K-12 schools. They are: (1) traditional public schools in the district where a family lives; (2) traditional public schools in districts other than where a family lives; (3) public charter schools; and (4) private schools in one of the state school choice programs. All parents may participate in the first three options, while the private choice programs are limited largely to lower income families,” the release explains.

“Taxpayer support of charter schools and choice schools is about 60% of traditional school funding. Students at these schools generally outperform those in traditional public schools on state proficiency exams. Students in choice programs consistently score higher on the college-readiness ACT test. In Milwaukee, the state’s Department of Public Instruction finds that twice as many choice and charter students attend highly- ranked schools when compared with students in the Milwaukee Public Schools.”

“The following are highlights of voter sentiment regarding: support of school choice
programs; making all families eligible; and ending the funding disparity between charter,
choice, and traditional public schools. For each topic the questions posed to voters are
presented along with responses,” SCW wrote.

THE WISCONSIN SCHOOL CHOICE PROGRAM ALLOWS LOWER-INCOME PARENTS TO SEND THEIR CHILD TO A PRIVATE SCHOOL OF THEIR CHOICE. PRIVATE SCHOOLS MUST MEET A STRICT SET OF REGULATIONS FOR STUDENT SAFETY, STANDARDIZED TESTING,PUBLIC AUDITS AND PUBLICLY REPORTING STUDENT PERFORMANCE. KNOWING THIS, DOES IT MAKE YOU FAVOR OR OPPOSE THE WISCONSIN SCHOOL CHOICE PROGRAM?
61.3% Favor
32.2% Oppose
6.4% Don’t Know/Refused
Seventy-seven per cent of those identifying as Republicans expressed support, as did a
majority (53%) of independents and 36% of Democrats.

NOW I’M GOING TO READ YOU A FEW THINGS ABOUT THE WISCONSIN SCHOOL CHOICE PROGRAM. PLEASE TELL ME IF IT MAKES YOU MORE OR LESS LIKELY TO SUPPORT THE PROGRAM. STUDENTS IN WISCONSIN’S SCHOOL CHOICE PROGRAM SCORE HIGHER ON STATE TESTS THAN TRADITIONAL PUBLIC-SCHOOL STUDENTS, SCORE HIGHER ON THE COLLEGE READINESS TEST, KNOWN AS THE ACT TEST, ARE MORE LIKELY TO GRADUATE HIGH SCHOOL AND ARE LESS LIKELY TO GET INVOLVED IN CRIME.
68.2% More Likely
17.9% Less Likely
8.4% No Difference
5.6% Don’t Know/Refused
Seventy-nine percent of those identifying as Republicans expressed support, as did
63% of independents and 43% of Democrats.

Universal Eligibility
PLEASE TELL ME IF YOU AGREE OR DISAGREE WITH THE FOLLOWING STATEMENT. CURRENTLY ONLY LOW-INCOME FAMILIES ARE ELIGIBLE FOR SCHOOL CHOICE VOUCHERS IN THE STATEWIDE PROGRAM. INCOME RESTRICTIONS NEED TO BE DROPPED SO THAT EVERY WISCONSIN FAMILY HAS THE ABILITY TO SEND THEIR CHILDREN TO A SCHOOL THAT’S BEST FOR THEM.”
64.6% Agree
31.1% Disagree
4.3% Don’t Know/Refused

Funding Equity
PLEASE TELL ME IF YOU AGREE OR DISAGREE WITH THE FOLLOWING STATEMENT. CHARTER AND CHOICE SCHOOLS HAVE BETTER ACADEMIC RESULTS COMPARED TO PUBLIC SCHOOLS YET RECEIVE LESS THAN TWO- THIRDS OF THE AMOUNT OF PUBLIC FUNDING TRADITIONAL PUBLIC SCHOOLS RECEIVE. IT IS TIME TO FULLY FUND CHARTER AND CHOICE SCHOOLS.”
53.7% Agree
38.5% Disagree
7/8% Don’t Know/Refused