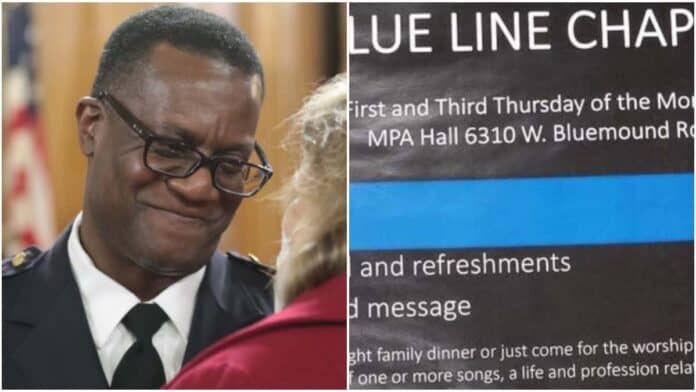 At a time of record homicide numbers, the Milwaukee police chief is upset about the “thin blue line” being on signs for a religious service meant to give officers comfort.

A source gave us a social media post that read, “Milwaukee Police Chief Norman yesterday ordered the removal of the ‘Blue Line Chapel’ signs advertising our members faith based support group church service from Milwaukee Police Facilities, citing it is ‘offensive.’ I ask for your prayers in this clear spiritual warfare attack on our police officers.” It’s not clear who wrote that post, but we asked Andrew Wagner, president of the Milwaukee Police Association, about the claims and he said, “Yes, I heard about it, and it is true.” 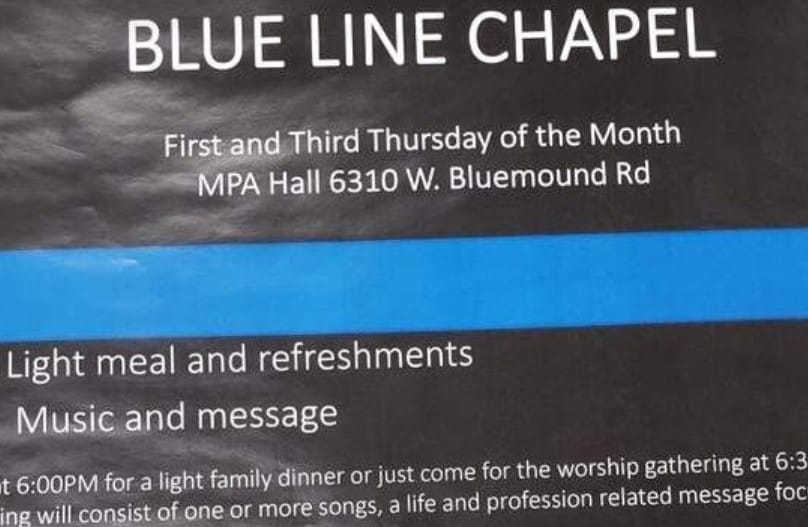 We asked Sgt. Efrain Cornejo, the spokesman for Milwaukee police, about it, and he responded,

“The Milwaukee Police Department (MPD) has a great respect for the religious beliefs of all our members and for the community we serve. The Blue Line Chapel will continue to operate under the same name. However, this does not mean we will be publicly displaying certain uses of the ‘blue line’ image. Our focus remains on the services provided and not the display of a symbol that over the past few years the ‘blue line’ image has come to represent different meanings, among different segments within our community. We continue to support our members, including the courage and sacrifices they have made to protect our community. MPD remains committed to working with our community and system partners to build sustainable neighborhoods free of crime that are built on positive relationships.” 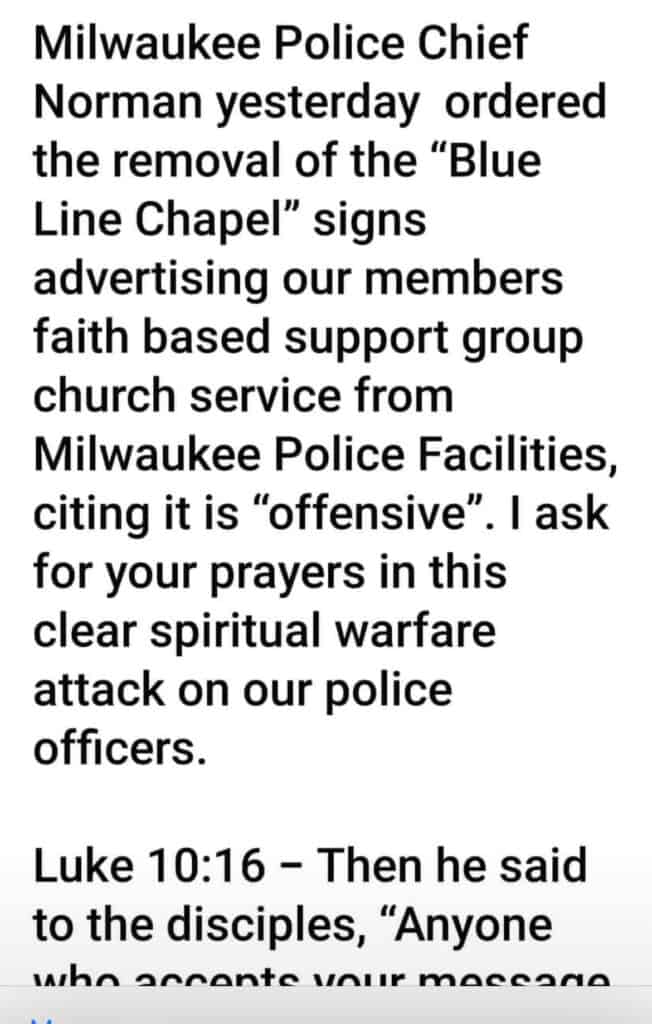 He responded, “It is not banned and the uses are subject to approval by the Executive Command Staff.”

WISN-1130 AM talk show host Dan O’Donnell first reported on Norman’s actions. He reported that the flyers “advertise the twice-monthly ‘Blue Line Chapel’ worship service at Milwaukee Police Association Hall.” They contain a bright blue line and read, “Please join us at 6:00 pm for a light family dinner or just come for the worship gathering at 6:30 pm. The worship gathering will consist of one or more songs, a life and profession related message focusing on the Bible and time for fellowship afterwards.”

“It’s an outrage,” a source told O’Donnell. “We can’t even show a symbol of pride for us because someone who comes into one of our stations might be offended. It’s ridiculous.” According to O’Donnell, the chapel services started during 2020 rioting when officers did not have time to make their normal church services and has continued.

What does the flag mean? According to the San Diego Union-Tribune, to law enforcement, the thin blue line means “police are the force that stands between law and order and chaos, the force that safeguards society against disorder.” Thin Blue Line USA explains, “The black space above the blue line represents society, order and peace, while the black below, crime, anarchy, and chaos. The Thin Blue Line running between them, ‘law enforcement,’ keeps crime from descending into society.” To officers, it is a symbol of pride, brotherhood, and valor.

The flag has caused controversies throughout the U.S. as some have argued it’s a response to the Black Lives Matter movement. The thin blue line first showed up as a law enforcement reference in the 1950s, however, when Los Angeles Police Chief Bill Parker used the term in a force dealing with corruption controversies. In 1854, a British regiment in the Crimean War was known as the Thin Red Line because of its red uniforms, when it “stood its ground against a Russian cavalry charge,” the Tribune reported.