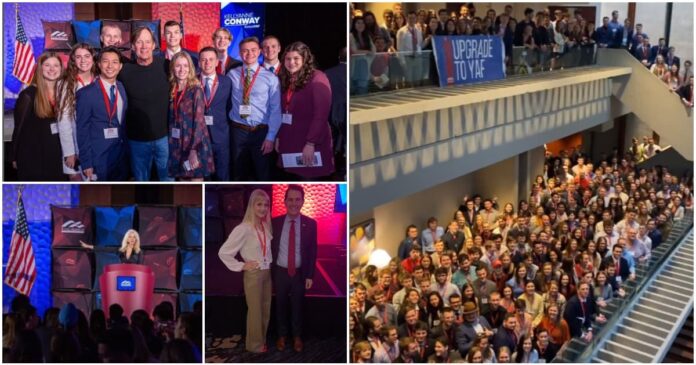 Jenna Piwowarczyk is a junior at Hartford Union High School. She is the founder and chairman of the HUHS Young America’s Foundation chapter.

This weekend, I flew down to Atlanta, Georgia, for the Young Americans for Freedom Conference. I was lucky enough to hear incredibly intellectual and inspiring figures like Trump’s Former campaign manager Advisor Kellyanne Conway, Kevin Sorbo, Scott Walker, Liz Wheeler, and others.

Kellyanne Conway, who was the first woman to run a successful U.S. presidential campaign, inspired us to be American leaders, speaking of the moral and ethical battles the left forces on young conservatives, especially young female conservatives, every day. She spoke of how perseverance and optimism won Donald Trump the Presidency, and how important it was for the future generations of America to continue to fight as hard as the Trump administration did.

One part of her speech struck a special chord with me, as she reminded conservative women that it is, in fact, possible to do it all. She elaborated on all of the women in the White House and how they managed to take wonderful care of their families as well as fight for the upkeep of America.

My experience in Atlanta reinforced the simple, yet the exceedingly important concept of freedom. America was built on the founding principles of liberty for all, yet in today’s society, we can see our freedoms slowly diminishing as our government grows more and more powerful.

“Freedom is a fragile thing, and it’s never more than one generation away from extinction,” Reagan once said, yet we are watching as our liberties are slowly being denied from the liberal government over us today.

The speakers reminded us that as young Americans, there is nothing more important we can do than stand up to retain the freedoms that the Founding Fathers fought for us to have.

Actor Kevin Sorbo, best known for starring in Hercules and God’s Not Dead, took to the stage the unique perspective of someone who works in Hollywood. He covered the blacklisting and infiltration of cancel culture that devours any and every up-and-coming actor, singer, writer, etc. that displays any sort of patriotism or conservative ideals. Sorbo exclaimed how valuable entrepreneurship is to the American progression and his love of capitalism.

After being blacklisted by his manager for being a Christian conservative, Kevin Sorbo started Sorbo Studios and succeeded incredibly with three movies coming out this year.

Burt Folsom, the American historian, spoke of the benefits of entrepreneurship, the preservation of free enterprise, and low government interference. Folsom was incredibly knowledgeable and lit up the stage with his exciting personality. He discussed the lasting impacts 29th U.S. President Harding had on the economic prosperity of the early 1920s, and why President Hoover’s policies led to the Great Depression.

Liz Wheeler, perhaps my favorite speaker, called out the racism of the Left. She called out Biden’s promise to nominate a black woman to the Supreme Court. Wheeler remarks on how gender tokens are more harmful to women than anything, as not only women, but their male colleagues as well, will question if she’s actually accomplished enough for her job, or if the employer is merely attempting to fit the status quo of identity politics.

Defining the difference between “equity” and “equality,” she states that “equity requires discrimination”, and why and how the Left uses them interchangeably. Wheeler called out the hypocrisy, racism, and sexism the left hides behind virtue signaling ‘equality.’

It was glorious to be surrounded by other like-minded, bright young people who share the same passion for the conservation of American values and the perseverance to keep America free.

Young America’s Foundation is truly one of the best things to happen to America since Ronald Reagan. To keep the future generations of America inspired and optimistic about the future of our country is something incredibly special and important.