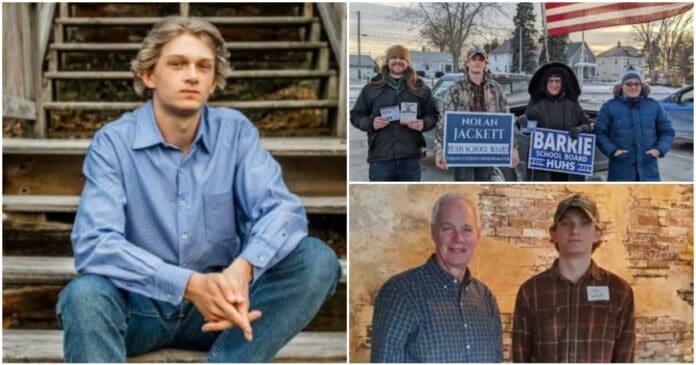 The district’s COVID policies “made school really, really unenjoyable, for a lot of people, it disengaged them from school. Masks made schools substantially worse. Annual school events were canceled; they didn’t let fans into games. They took a lot of the high school experience and tried to take it away from us. A lot of things they did were pointless.” – Nolan Jackett

There’s been much written about the “Great Parental Awakening” of conservative parents taking back School Boards over Critical Race Theory and pandemic policies in Wisconsin and across the country. Now add this former high school student to that list. He recently met with U.S. Sen. Ron Johnson (he calls him a “down-to-earth” guy), and the Washington County Republican party is helping him.

“Last school year, it became very obvious to me that the school board did a very poor job representing students and parents. They didn’t listen to us, reach out to us, or ask our opinions on anything,” Nolan Jackett, who will be 19 on Monday, told Wisconsin Right Now in an interview.

Nolan Jackett was an Eagle Scout, class president, and a member of the football team. He’s now in a tech school program studying electricity. He’s running on a platform of fixing curriculum so it’s not just about memorization, keeping ideology out of classrooms and the school library (he says there’s been left-wing ideology forced on students), getting schools back to normal, and, mostly, listening to student and parent voices more.

The district’s COVID policies “made school really, really unenjoyable,” said Jackett. “For a lot of people, it disengaged them from school. Masks made schools substantially worse. Annual school events were cancelled; they didn’t let fans into games. They took a lot of the high school experience and tried to take it away from us. A lot of things they did were pointless.”

Six candidates are running for the chance to take on two incumbents. The top four will get through the Feb. 15 primary. One of the incumbents is Craig Westfall, who was the lone vote against getting rid of the mask mandate for students, Jackett said. The other incumbent, Tina Pridemore, is conservative. The other candidates are former Republican state Rep. Don Pridemore, Heather Barrie, and Jonathan Lobert.

“I am not running against anyone. I am running on my voice, my values and messages,” he said.

“We never felt represented,” Jackett said of students. “It became obvious there is political bias in the classroom toward the left. It goes completely unchecked, which is concerning.” Some of it revolves around pushing Black Lives Matter ideology on students, he said.

He said that parents were furious about the mask mandate but it “took parents literally storming into board meetings” for the board to even consider it. About two weeks before the semester ended, the board finally lifted it, but he believes some board members don’t “care about parents’ opinions.”

He also has concerns about a platform used for online course materials. “It was something students didn’t want,” and weren’t consulted on, he said.

Nolan Jackett also said he wants to make sure that CRT doesn’t end up in classrooms.