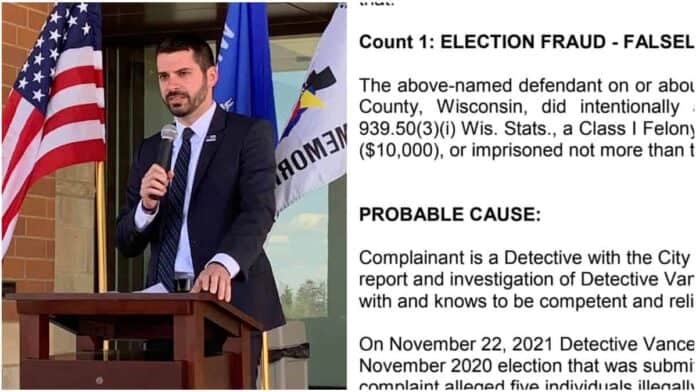 “Elections are the cornerstone of democracy and must be safeguarded at every turn,” DA Eric Toney.

“These five cases came from an investigation conducted by the City of Fond du Lac Police Department. The allegations relate to individuals that illegally registered to vote using a PO Box as their address with three of the five voting in the November 2020 election. All defendants are presumed innocent unless or until proven guilty in court,” Eric Toney said in a press release.

Eric Toney is running for state Attorney General as a Republican.

“Elections are the cornerstone of democracy and must be safeguarded at every turn. It is crucial to educate the public and ensure they are properly registering to vote to ensure these violations don’t end up in the hands of a district attorney. We want people to vote and to ensure they do so following our election laws,” Eric Toney said.

Read the criminal complaints here. The complaints were filed in the following cases:

Markeis D. Carter, 21, Fond du Lac, is accused of falsely procuring voter registration. “Carter confirmed his PO Box #312 and Carter stated that he believed he provided his PO Box address in registering to vote. Carter appeared very apologetic upon learning that he could not register to vote with a PO Box,” the complaint says.

Jeffrey A. Testroete, 53, of Fond du Lac, was accused of falsely procuring voter registration. The complaint alleges that Testroete told police “he was living out of his truck at the time and DMV wouldn’t take a PO Box as an address so Testroete got the UPS Store PO Box because he could list that as an address on his license.”

Jamie M. Wells, 53, of Fond du Lac, is accused of falsely procuring voter registration. The complaint says that Jamie Wells “told Detective Henning that she listed her PO Box when registering to vote because it is her ‘home base.’ Jamie was informed that she cannot register to vote with a PO Box and she indicated that would be changed. Jamie also stated that the candidate she voted for didn’t win so it didn’t matter anyway. Detective Henning explained that he was following allegations of people illegally registering to vote with PO Boxes. Jamie told Detective Henning that he should be looking at the election in Wisconsin because the election was cheated and ‘they took it away from Trump.’”

Lawrence Klug, 76, of Fond du Lac, was accused of providing false information to an election official. Police could not reach Klug.

“We have seen national election after national election scrutinized and the results routinely doubted by the losing party. I recognize we must do better as a nation and we can do better in Wisconsin to protect the integrity of our elections,” Toney said.

“The State legislature has passed legislation seeking to improve our election laws, including adding criminal penalties, but additional improvements are needed. Criminal penalties often only address the conduct after the votes have been counted. As a district attorney that is prosecuting election fraud, I know it can take months after an election has occurred for the Wisconsin Elections Commission to refer criminal charges to local district attorneys, which is too late.”

“Wisconsin must entrust local district attorneys and the attorney general to enforce election laws similar to how state ethics and open meeting laws are enforced,” he said.

“Current Wisconsin law grants standing to district attorneys and the attorney general by allowing any citizen to submit a verified complaint to them asking that an open meetings violation or ethics violation be filed in circuit court, including criminal ethics charges. Current law also allows a district attorney or the attorney general to file a mandamus, declaratory judgment, or injunction in some of these cases. This same approach is needed to ensure there is standing to protect the integrity of our elections because criminal penalties are insufficient and will often only address misconduct after the votes are counted.”

He continued: “By adopting the model used for state ethics and open meeting violations it will allow citizens to submit a verified complaint to their district attorney or the attorney general demanding that potential illegal election conduct be investigated. This requires the complainant to submit an affidavit alleging specific facts, names of witnesses, and laws violated for a district attorney or the attorney general to then investigate and determine, what, if any, action should be taken.”

According to Eric Toney: This would empower citizens to keep watch over our elections and grant standing to district attorneys to file forfeitures or criminal charges as well as injunctions, declaratory judgments, or a mandamus action to immediately halt any illegal election activity. This commonsense approach would allow district attorneys and the attorney general to protect the integrity of our elections similar to how we are entrusted to protect our communities as well as enforce ethics and open meeting violations.”