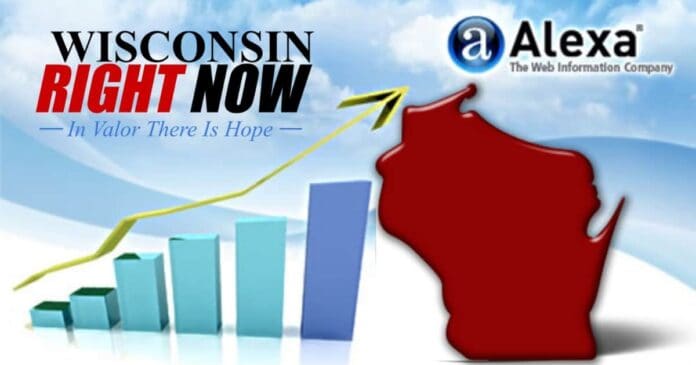 Wisconsin Right Now is top-ranked in popularity among all independent online news sites in Southern Wisconsin and ranks ahead of many major legacy media newspapers and television stations throughout the state.

Stories out of Kenosha in 2020 and last year point to a sea change in how people get their news. Sources such as UrbanMilwaukee and the flourishing upstart Wisconsin Right Now illustrate the new landscape.

Consider the common thread that drove early mainstream news coverage after the 2020 police wounding of Jacob Blake and the subsequent actions of Kyle Rittenhouse. In both cases, the so-called legacy media set aside traditional journalistic standards to advance agenda-driven narratives about police brutality and white supremacy that defined the news following the death of George Floyd.

However, as events unfolded, the early coverage turned out to be flat-out wrong — a Democratic prosecutor said the shooting of Blake was justified and a jury acquitted Rittenhouse. Both outcomes were premised on issues covered extensively in the so-called alternative media but largely ignored by the mainstream press. So, while the resolution of each case has been described as “the system” working, that’s only partially true. The system might not have worked but for information that became public through alternative media sources. These venues are enabled by the low overhead of the digital age, the decline in traditional newsrooms of standards that once were the rule, and other factors.

In the case of Rittenhouse, videographers at the scene of the Kenosha riots provided multiple clips of events before and during the actual encounters. Wisconsin Right Now reporters were on the scene for several nights. Their reporting and posts of videos helped focus attention on the possibility of self-defense. They found missing evidence, interviewed witnesses right after the Rittenhouse shooting, and live-streamed arson fires at a time when few traditional reporters remained at the scene. The videos from independent videographers on both sides of the political spectrum became evidence that eventually was central to the Rittenhouse trial and acquittal.

Independent data cited below shows the stunning magnitude and reach of alternative media sites that have emerged in Wisconsin.

Historically, an important measure of media impact was daily circulation of hard copy newspapers. By that measure, the Milwaukee Journal Sentinel’s dive has been so profound as to cost the paper its longstanding status of independent local ownership. At the time of the paper’s formation through a merger in 1995, daily circulation was 328,000. It has plunged to less than 100,000. Bruce Murphy has chronicled the trend, including here.

As people increasingly go online for news, the matter of where they log in, and for how long, helps gauge the impact of various outlets. Of several sources that estimate website traffic, Amazon-owned Alexa is among the prominent.

A key Alexa measure tracks known websites worldwide. Its global rankings compare sites based on traffic, i.e., number of hits. As of a recent Friday in January 2022, Alexa tracking tells a fascinating Wisconsin story. Wisconsin Right Now is the highest-ranked “independently run online” Wisconsin site in southern Wisconsin, followed closely by: Wispolitics (a longstanding source of state political news); OnMilwaukee (an entertainment and dining out site); and UrbanMilwaukee, the local news and opinion site established by veteran Milwaukee journalist Bruce Murphy and where I am an occasional contributor. In the state as a whole, the northern Wisconsin website DrydenWire, which is a non-partisan news site and podcast that was founded in 2015, is #1 out of independently-run online news sites, with Wisconsin Right Now leaping to #2, above many other longer established sites.

The high ranking of Wisconsin Right Now (WRN) is especially noteworthy. It only came on the scene in August 2020, while the three that follow it in the rankings and the one before it have been around for years. It has a “staff” of two — Jessica McBride and Jim Piwowarczyk. Neither draws a salary.

Here are the rankings for Wisconsin news sites as of January 2022. According to the Amazon-owned Alexa site, its rankings “are calculated using a combination of average daily visitors to this site and pageviews on this site over the past 3 months. The site with the highest combination of visitors and pageviews is ranked #1.” Thus, the lower the rank, the more popular the site. The numbers below represent each site’s rank on the Alexa popularity list:

McBride, a former Journal Sentinel reporter, teaches journalism at UW-Milwaukee and is a national freelance writer. Piwowarczyk is a Realtor and former police officer. Sites with major funding, from the Wisconsin Examiner to Wisconsin Watch to the MacIver Institute to Up North News, are lagging far behind.

McBride and Piwowarczyk have gained traction with a steady series of spot news scoops and insightful analysis and commentary focused mainly on criminal justice, current events, and political issues. They’ve gained audience thanks to their social media expertise. A scoop this year reported that a suspect in the shooting of an off-duty policeman was out on $1,000 bail and that another had three open felony cases. A Republican candidate for governor chose Wisconsin Right Now as one of two news outlets in which to announce his campaign.

The Journal Sentinel’s report on the news credited Wisconsin Right Now with being first. Local TV and other newspapers focused on a suspect not believed to be the gunman. Following the Waukesha Christmas parade tragedy, Wisconsin Right Now’s journalists were the first to name names and provide a chronology of how Darrell Brooks was free on the streets. They followed this with evidence that Brooks’ ill-advised release was not a one-off. They also scooped the rest of the media with news of backlogs in the Milwaukee County Courts, the staffing crisis in the Milwaukee County Jail, and with data on the high percentage of cases dropped by District Attorney John Chisholm despite police recommendations for prosecution. Earlier last year their exclusive reports on missing podcasts led Ryan Owens to withdraw as the frontrunner candidate for the GOP Attorney General nomination.

Wisconsin Right Now gets a big boost from conservative talk radio. Hosts at WISN 1130 routinely cite its work and describe it as a source they go to daily. They also use search engine optimization, a newsletter that goes to thousands, and social media expertise to gain audience. The significance of that is illustrated by the very high Alexa ranking of the WISN website in the category of traditional media. WISN, followed closely by the Wisconsin Business Journal, get the most Wisconsin hits. As would be expected, large media outlets, such as the Journal Sentinel and the Wisconsin State Journal, get more traffic than the likes of Wisconsin Right Now and UrbanMilwaukee.