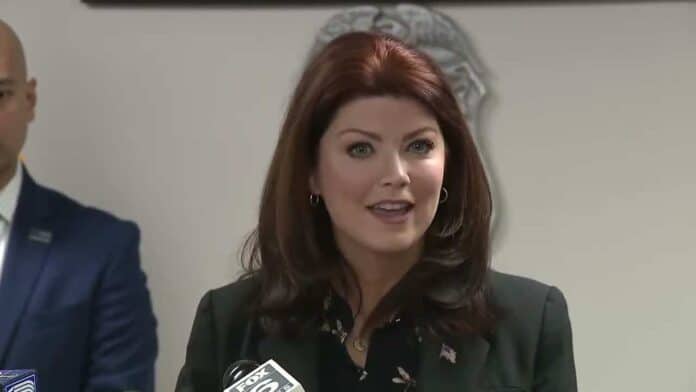 Former Lt. Gov. Rebecca Kleefisch, a Republican candidate for governor, called out the “lack of leadership” on crime in the state, outlining an aggressive plan to combat it, including putting 1,000 new police officers on the street, taking away judicial and prosecutors’ discretion on bail, surging the Wisconsin State Patrol into areas with crime increases, appointing law-and-order judges, and firing Milwaukee County District Attorney John Chisholm.

“As your governor, I will fire District Attorney John Chisholm,” she pledged in the February 1, 2022, news conference.

Kleefisch, appearing alongside leaders from the Milwaukee Police Association and Fraternal Order of Police, also highlighted a series of stories broken by Wisconsin Right Now over the past year, including Chisholm’s high non-prosecution rate, a two-year backlog in the Milwaukee County court system, a domestic violence suspect who was out on bail when accused of murder, and a waiting list for criminal defendants to get electronic monitoring bracelets.

When police refer “10 felony charges and the DA’s office charges only four of them, we have a problem,” she said.

“Law enforcement must be backed,” Kleefisch stressed. “We must stand with the brave men and women who stand on the thin blue line and protect our families but unfortunately today in Wisconsin they are under assault, not only by violent criminals but the dangerous rhetoric and lack of attention on the left.”

Kleefisch expressed great concern about violent crime spikes in Milwaukee and the state and added, “What is perhaps most terrifying is that our law enforcement officers are under siege right now and nobody seems to want to stand up with them. I will.”

She added: “When we have three law enforcement officers shot in the last two weeks in Milwaukee, we need to stand up and say it is unacceptable.”

“Enough is enough,” he said. “How many more citizens have to get victimized and how many police officers have to get shot in our city before something is done with the low bail crisis?”

Both Ayala and Kleefisch said that currently when bail is set, judges only consider whether the defendant will appear in court. They want judges to also consider the safety of the public, the severity of the crime, and a defendant’s past criminal record.

“This will ensure violent criminals are not out committing more crimes and trying to kill our brave police officers when they are doing their jobs or just enjoying a meal on their off time,” said Ayala,

Mark Sette, the vice president of the Wisconsin Fraternal Order of Police, said, “We stand behind Alex and Rebecca on their comments about what’s going on with low bail and problems with crime. It is absolutely out of control. Our cities are war zones and our officers are paying the price.”

He called for reform and a “system where people are held accountable.”

Sette noted that his organization endorsed Kleefisch because “one of her pillars is public safety.” The state can’t prosper without it, he said.

The MPA has also endorsed Kleefisch.

The other Republican candidates in the race are combat veteran Kevin Nicholson and small business owner Jonathan Wichmann. They are running to square off against Democrat Tony Evers.

Kleefisch said bail reform is needed even if it “takes going all the way to the Constitution.”

She said that violent criminals “with rap sheets a mile long are being let go.”

She noted that Darrell Brooks, the Waukesha Christmas parade massacre suspect, should not have been out on such low bail but indicated that is far from an isolated case.

Evers is “being dumber about things” despite being awash in federal COVID money, Kleefisch said, because he’s not spending it to “make sure we have enough cops to police our streets.”

Kleefisch also criticized outgoing Milwaukee Mayor Tom Barrett, saying, “This is about priorities. Mayor Barrett has not prioritized the safety and security of the people of Milwaukee.” Rather, she said, the city has had two years of “violent crime raging. If I were them, I would choose the safety and security of the families over their pet projects.”

During follow-up questioning, Kleefisch said she wants to eliminate the Wisconsin Election Commission because she believes it has been “lawless and ineffective.”

“I differ with the speaker (Robin Vos) on his tone and rhetoric on WEC as well as the majority leader in the state Senate,” she added.

She said Wisconsin needs to have a discussion on eliminating cash bail.