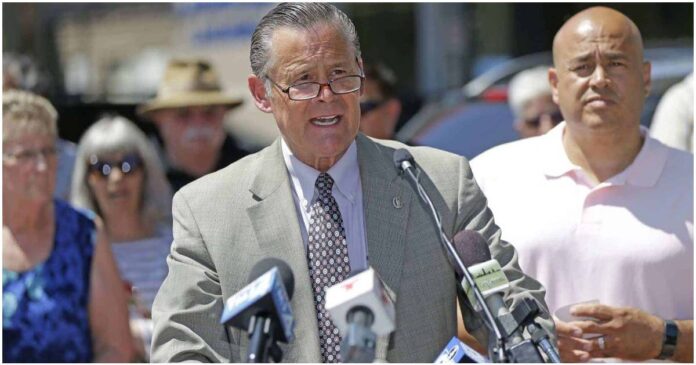 Former Alderman Bob Donovan, who is running for Milwaukee mayor in the Feb. 15 primary, is calling for state legislators to change state law to require mandatory minimum bail amounts for violent crimes and bail jumping offenses.

Donovan detailed the criminal history of Jetrin Rodthong, the accused shooter of a Milwaukee police officer, which was outlined in a Wisconsin Right Now story. He also called out Milwaukee County District Attorney John Chisholm, calling him “dangerously weak on crime.”

Donovan’s comments came just hours after Wisconsin Right Now reported that the man accused of shooting a Milwaukee police officer multiple times at N. 21st St. and W. St. Paul Ave. was out on bail for three open felony cases in Milwaukee County. We also reported that Jetrin Rodthong, the suspect, was arrested in September on serious crimes in Wauwatosa, but Chisholm’s office declined to prosecute him. Read about that here.

Wake Up, Milwaukee—Your Life Depends On It!

Milwaukee’s rampant violent lawlessness will not come under control until we take a serious look at what causes it—even more importantly, who’s allowing it—and working towards real solutions that put a stop to the crime wave.

This is in large part due to our county’s dangerously weak on crime District Attorney John Chisholm.

Chisholm bears a good part of the blame for allowing last night’s shooting of a Milwaukee police officer—while already facing three felony cases in Milwaukee, last night’s suspect was arrested by Wauwatosa police this past September and recommended for various felony charges INCLUDING A WEAPONS CHARGE. Chisholm chose not to prosecute.

The lawlessness is also courtesy of reckless court commissioners who set unconscionably low bail amounts that allow violent criminals to get back out on our streets within hours or days of their arrest.

Court Commissioner Alexis Liggins TWICE released last night’s suspect on recklessly low cash bail in felony cases—just $300 in one case—placing him back out on our streets to re-offend innocent victims, and in last night’s shooting the victim was one of our brave heroes in blue.

District Attorney Chisholm along with many of Milwaukee’s judges and court commissioners continue to imperil the lives of all Milwaukeeans and Wisconsinites—we only need to look at the Waukesha Christmas parade tragedy for evidence of this.

As mayor I will work with legislators in Madison to change state law, setting MANDATORY minimum bail amounts for violent crimes, including first-time violent criminals, and for those facing bail jumping charges—Madison lawmakers are currently working on new laws that would require a minimum cash bail amount of $10,000 for defendants previously convicted of a felony or violent misdemeanor.

We cannot allow Milwaukee court commissioners the opportunity to continue with these dangerously low bails for violent offenses!

Additionally, Milwaukee needs to step up its law enforcement game.

The previous administration disbanded our gang and drug units—we must bring them back to take our city’s most dangerous criminal actors off our streets!

As mayor I will request state and federal assistance in gaining control of our streets.

I am NOT advocating a police state. I am advocating we go after criminals, especially violent criminals—I want to protect each and every one of our law-abiding citizens.

What are the other mayoral candidates saying?

Acting Mayor Cavalier Johnson trots out more of the same failed policies—let’s stick more money into the Office of Violence Prevention, more diversity training for cops, yet more money to be squandered on programs that don’t work.

The others are pretty much saying the same—the violent lawlessness won’t end with Johnson or any of these status quo candidates and their policies that have proven to be utter failures.

Milwaukee won’t be safe until it has a leader who takes public safety seriously and works to catch violent criminals and put and keep them safely behind bars.

I’m fighting for Milwaukee’s good, law-abiding citizens—that is the vast, vast majority of residents in each and every neighborhood throughout our city.

I’m fighting for your family’s safety.

Please, join me—together we can and will take Milwaukee back from violent criminals.