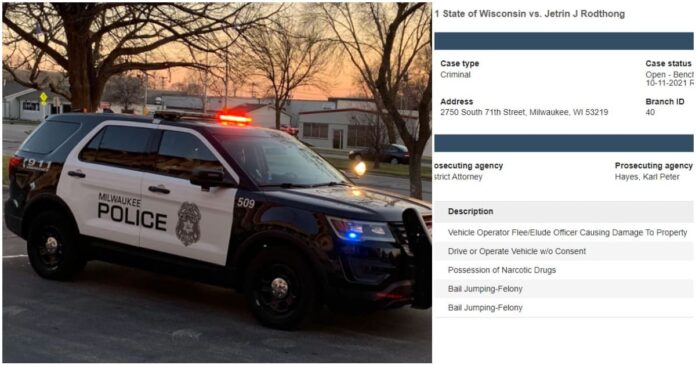 Jetrin Rodthong, the man suspected of shooting a Milwaukee police officer near N. 21st St. and St. Paul on Thursday night, was wanted on a bench warrant in three open Milwaukee County felony cases that were filed in 2020 but dragged on and on in the backlogged Milwaukee County court system.

He was released in those cases on a signature bond, $300 cash bail, and then $3,000 cash bail, court records show.

The constant delays – because of “calendar congestion,” COVID policies, defense attorney requests, and other reasons – meant that Rodthong remained on the street to allegedly re-offend. And re-offend again. By the time he encountered the MPD office near N. 21st St. And St. Paul on Jan. 27, 2022, he had three open felony cases with multiple charges. They include felony bail jumping charges.

Yet he remained on the street with almost deadly consequences to a Milwaukee police officer, sources say.

It’s the third time in two weeks that a Milwaukee area law enforcement officer was shot multiple times; the other two – an off-duty Milwaukee police officer and Milwaukee County sheriff’s deputy – also survived their wounds. The man accused of shooting the detective was out on $1,000 bail for another serious felony case.

It’s part of a concerning pattern that is imperiling lives. The Milwaukee County court system has a two-year backlog in felony cases driven in part by officials’ decisions to keep some courts closed for in-person jury trials. In case after case, accused criminals are released on low bail amounts and given plenty of time to re-offend because their cases don’t proceed to sentencing in a timely manner, in some cases despite speedy trial requests. The low bail amounts given to Waukesha parade suspect Darrell Brooks in two Milwaukee County cases made national news.

Multiple sources told Wisconsin Right Now that Jetrin Rodthong is the suspect in the shooting of the officer, who was shot three times but is in stable condition and expected to survive. Jetrin Rodthong allegedly stole the officer’s squad and then crashed it; he shot the officer three times and the officer shot him in return, sources say. It all started as a welfare check involving a vehicle, they say.

Jetrin Rodthong, 22, has an address on the south side of Milwaukee.

According to court records:

His first open felony case was filed on March 19, 2020. He was charged with felony fleeing an officer. The issuing agency was the Milwaukee Police Department.

There were various scheduling conferences throughout October and November 2020. Court hearings were rescheduled and adjourned for various reasons through February and April 2021.

There was talk of a plea but by May 2021, the defense raised concern about moving ahead with it.

On Oct. 5, 2021, Jetrin Rodthong didn’t show for court and a bench warrant was issued but stayed.

In that case, Rodthong was charged with felony operating a vehicle without owner’s consent, felony bail jumping, and misdemeanor resisting an officer.

On Sept. 24, 2020, he appeared by Zoom. There were other adjourned hearings and scheduling conferences throughout October, November, and December 2020.

The defense attorney advised that resolution was likely but then said there was cause of concern to move ahead with a change of plea. By August 2021, the defense attorney, William Rakestraw, was requesting jury trial dates.

He was charged with the third felony case on Aug. 25, 2020. Those charges were two counts of felony bail jumping, felony possession of narcotic drugs, fleeing an officer causing damage to property, and drive or operate a vehicle without owner’s consent.

The preliminary hearing was adjourned for this case on Sept. 10, 2020 due to calendar congestion.

At times the defense asked for a projected guilty plea hearing or was unavailable. He advised resolution was likely, and then raised concern about changing the plea.