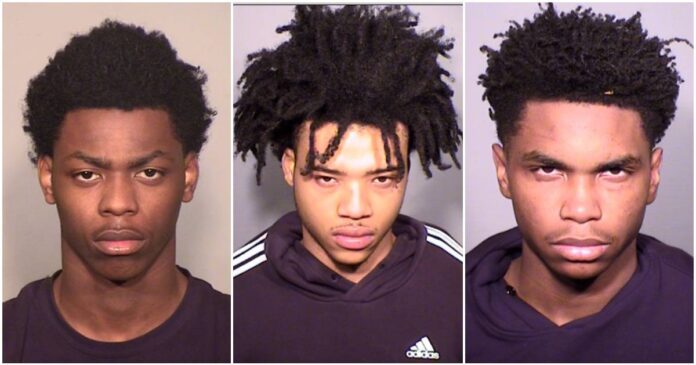 “Our detective was released from the hospital today,” police said, revealing the Milwaukee detective shooting suspect was charged.

Criminal charges have been filed against the suspected gunman, Keasean Ellis-Brown, in the shooting of an off-duty detective who was wounded while trying to stop a carjacking last week. The criminal complaint describes how the wounded and heroic detective, who had intervened to protect a woman from Ellis-Brown, had the presence of mind to remember and document the suspects’ license plate despite being shot multiple times.

Two other suspects were charged with other serious offenses relating to the incident.

WRN previously broke the story that the suspected shooter, Keasean Ellis-Brown, was out on $1,000 bail for another very serious felony case in Milwaukee County. Read about that here. The criminal complaint confirms that police believe Ellis-Brown was the shooter, and the other two suspects were in the car.

The complaint reveals that one bullet narrowly missed the detective’s heart. It also says that Ellis-Brown dropped his phone during a botched carjacking of the vehicle of a DoorDash driver, and the detective intervened when he physically attacked the woman to get his phone back.

According to a release from Milwaukee police on January 18, 2022,

On Monday, Jan. 17, 2022, the Milwaukee County District Attorney’s Office issued criminal charges against Keasean J. Ellis-Brown, Dionta’e L. Hayes and Timonte Karroll-Robinson in connection to the shooting of an off-duty Milwaukee Police Department detective that occurred on January 13, 2022, at approximately 2:00 p.m., on the 200 block of E. Buffalo Street. The detective assisted a female that was being attacked by a suspect, identified in the complaint as Ellis-Brown. The detective attempted to detain the suspect. A struggle ensued, at which time the suspect brandished a firearm. The suspect fired multiple rounds at the off-duty detective, striking him multiple times, and fled the scene, police said.

Here are the specific charges:

Police said: “Our detective was released from the hospital today and is requesting respect for his privacy as he recovers. The Milwaukee Police Department would like to thank all the community members who rendered aid to our detective as well as the professional care and assistance from the Milwaukee Fire Department, Froedtert Hospital staff and numerous law enforcement agencies. We continue to wish our detective a speedy recovery.”

According to the complaint, on Jan. 13, 2022, the off-duty Milwaukee police detective was shot multiple times inside the Shake Shack restaurant located at 220 E. Buffalo St. in Milwaukee.

One of the bullets narrowly missed the detective’s heart. He had put himself on duty to assist with an attempted car theft.

The woman whose car the suspects were trying to steal works as a DoorDash driver. She said she had a food order to pick up at Shake Shack, and she had her three children with her. They asked to use the restroom. She turned off her car and exited, walking into the Shake Shack to ask if her children could use the restroom. As she was asking, the staff told her that someone was taking something out of her car. She looked and saw a black male running from her car and getting into a silver car stopped at the intersection, the complaint says.

The person got into the front passenger seat and the car turned north on Water Street.

She saw an iPhone on the ground; it belonged to the suspected shooter, Ellis-Brown. A suspect got into the front driver’s seat of her car and looked back and said oh f*** when he saw the children.

The detective heard what happened. The phone was ringing, and she put it in her pocked. Ellis-Brown walked into the Shake Shack. He turned to her and demanded his cell phone, grabbed her and pushed her against the wall, reaching into her pocket to remove the phone, the complaint says.

The detective “said something about the police and grabbed the suspect off of her.” He was saying “stop Police!” and was attempting to wrestle the suspect to the ground and got him to the ground,” said the complaint.

Ellis-Brown was reaching for his waistband, and the victim heard two gunshots and then three additional shots. She saw the officer on the ground. He kept repeating the license plate of the suspects and mentioned it was an out-of-state plate.

Another woman was interviewed who is a nurse. She could see the detective with a male later identified as Ellis-Brown. Ellis-Brown was holding the pistol, and she heard gunshots. The suspect ran from her and fired his gun three to four times in the air after leaving Shake Shack as well.

She entered the restaurant and saw the detective lying inside with a handgun in his hand. She rendered aid. He asked her to copy down the license plate. He had gunshot wounds to his lower back and the middle portion of his abdomen.

He appeared to be shot at close range. There were four gunshot wounds, two to his abdomen, one to his groin and one to his back. The detective described how the suspect was demanding that the woman give him his phone back.

The vehicle the suspects were in was stolen in Menomonee Falls.

The vehicle was later spotted and led police on a chase at high speeds, disregarding red lights. Two of the suspects exited the car and were spotted running along Chambers Street.

Those suspects were Diontae Hayes and Timonte Karroll-Rovinson, the complaint says.

When arrested, Hayes was in possession of suspected marijuana.

According to the complaint, Hayes told police the suspects went to the area of Shake Shack at Ellis-Brown’s request. Ellis Brown jumped in the driver’s seat but then realized there were kids in the car. He dropped his phone. After the shooting, he told them that he tussled with an undercover cop.  He drove him back to his house.

Hayes stated he ran but Karroll-Robinson did not because he had recently been shot.

It’s common in Milwaukee for groups of individuals to work together to steal vehicles either for joyriding or to sell to other criminals, such as drug dealers or armed robbers. They are used to commit other crimes, such as burglaries, says the complaint.

The shooting occurred at Water Street. We’ve written many stories about shootings along Water Street and how dangerous that street became, especially during the summer. See our Water Street coverage here.

The Third Ward is an area of Milwaukee that had undergone a renaissance and is a popular area for lunch crowds. The brazen shooting happened in broad daylight as the city continues to reel from spiking violent crime and city and county officials more focused on using anti-police rhetoric than solving the problem. Motor vehicle theft rose 132% in Milwaukee in 2021.