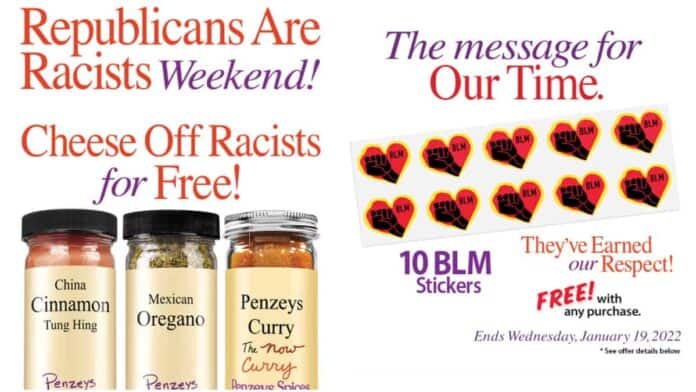 Just in case conservatives ever consider buying Penzeys Spices… remember that Bill Penzey did this.

Penzeys Spices has announced that it is holding a special “Republicans Are Racists Weekend!” deal.

“Cheese Off Racists for Free!” It reads.

There are then three spice bottles, “China Cinnamon,” and “Mexican Oregano,” and “Penzeys Curry.”

The order contains free 10 BLM stickers because they have “earned our respect!”

The offer ends January 19, 2022. Even some Democrats thought it was distasteful. “I am a Democrat. But, I find this bad business,” wrote one person on the Penzeys Spices Facebook comment thread. “Not a fan of dismissing large groups with derogatory names. I love Penzeys but not this campaign,” wrote another.

“I’m a Democrat and liberal and all that and I know not all Republicans are racist. I think this is going a bit too far with the generalizations,” a woman wrote. Another said: “I will NEVER by from you again!!! This is horrible and you talk about racists?!! Displaying this?! HORRIBLE.”

It’s not the first time Penzey has trashed Republicans; he’s known for it. On Jan. 6, 2022, he sent out a marketing email that “unleashed on Republican voters at large, calling them the ‘#1 threat’ to the United States,” Fox Business reported. He also funded Facebook ads calling for the impeachment of President Donald Trump. 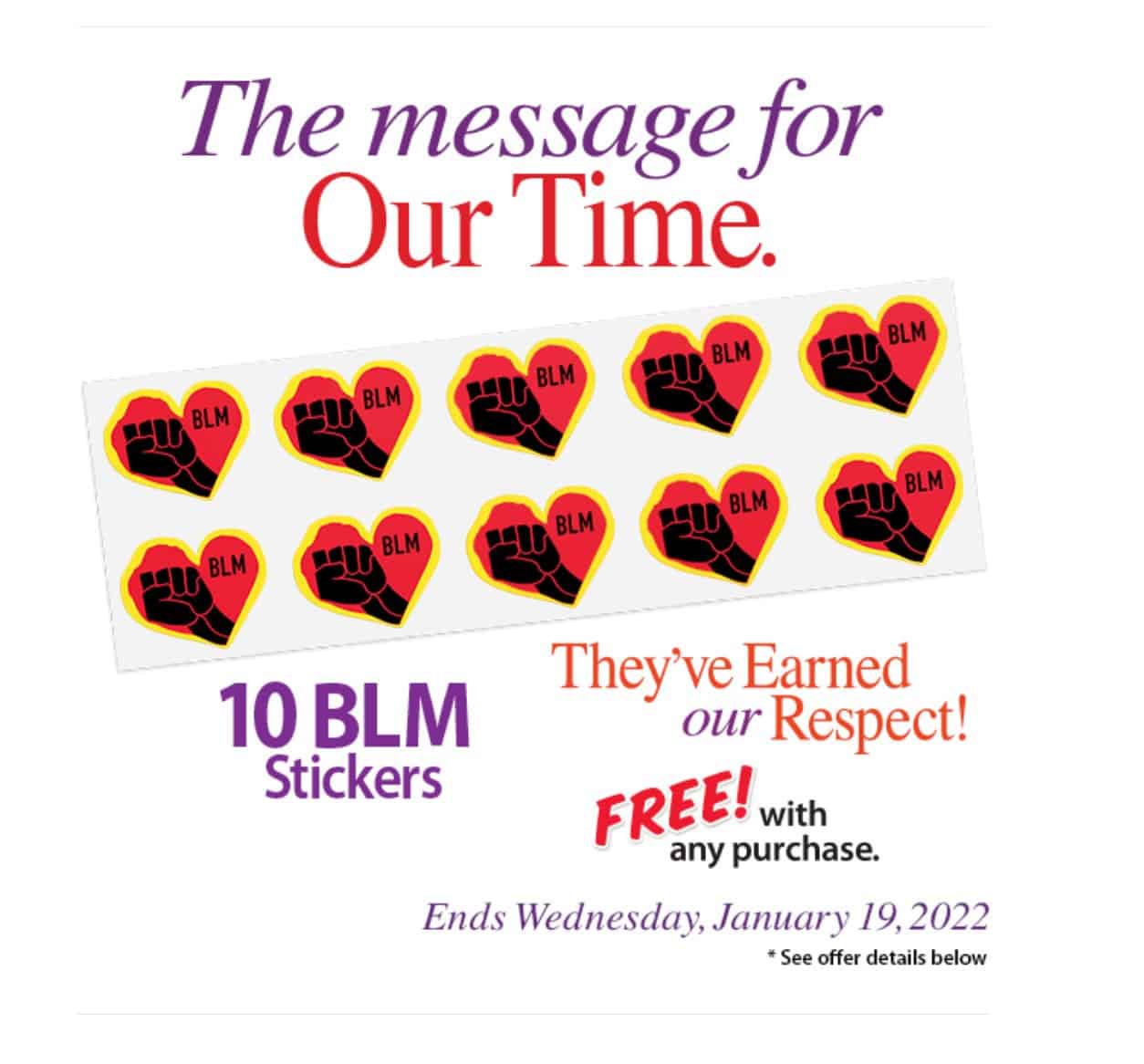 Here is Penzey’s letter with the offer.

“Remember when Black Lives Matter started to have some success getting all of America to see how unfairly Black Americans are treated in this country and the importance of us all saying Black Lives Matter until Black lives start to be treated as though they do matter? Remember how Republicans, seeing the success BLM was having in moving America towards greater equality for Black people, in many ways the first real success since the time of Dr. King, remember how Republicans did all they could to derail that success by trying to drown out BLM’s message with shouts of all lives matter, and blue lives matter, and lying about the leaders of BLM being Marxists and Communists?

Remember after George Floyd’s murder the anger and righteous outrage that swept across America? Remember how Black Lives Matter stepped in and redirected that anger into peaceful protests that millions of Americans from across all walks of life participated in, amassing a hundred million human-hours of peaceful protest? Remember how Republicans, going against a mountain of evidence to the contrary, once again lied and said BLM wasn’t a peaceful movement but instead terrorists inciting violence throughout the country and then raced out to buy a crapload of guns because maybe they were finally going to get their chance to shoot a Black person? What a bunch of racists.

So many great things about our spices and seasonings. One of those great things is that pretty much every one of them, by virtue of where they are grown, who they are picked by, or by the cultures of the foods they ultimately go on to season, cheeses off racists. And where normally cheesing off racists is something we throw in for free with the purchase of any of our spices, in honor of the life of Dr. King, this extended weekend we are throwing in an extra cheesing off of an up-to-$12.95 value 1/2-cup jar free with any $10 purchase.

This Dr. King Memorial Weekend we are also giving away 10 little but powerful BLM stickers with any purchase. And two of our very best blends, our regularly $3.95 Galena Street and $5.29 Mural of Flavor, are only $2 each with the entirety of those $2 being split between the national Black Lives Matter organization and Milwaukee’s own BLOC that’s doing an outstanding job pushing back against the decades of racism this community has faced. Thanks for helping support good people.

No coupons or codes are needed for any of these offers. Each is automatic for everyone. On penzeys.com, whether you are looking to get your order shipped or looking to do touchless pickup in one of our stores, once you have an additional $10 in spending your most expensive of all your half-cup jars up to $12.95 in value will automatically be free. It’s easy!

And I get it. If you are a Republican voter you are now cheesed off. You were promised that there would never be any accountability for your support of the party of open “textbook” racism. Sorry, but for the betterment of all Americans, you included, we’ve decided to end that rule. And I really don’t care what your race is or how many of your friends “happen to be” whatever. None of that excuses you.

If you’re a part of a party that does everything it can to make it harder for Black people to vote, gerrymanders the value of minority votes down into a small fraction of the value of white votes in state houses and in the US House of Representatives, and are willing to vote for candidates of the party that nominated a man for president who explained why he was launching his campaign by saying: “Mexicans are rapists and murderers,” the Racist label is one you will deservingly wear every day you stand with them. Get used to it, or maybe instead, become a better person. The choice is yours. We will be here rooting for you to Choose Love.