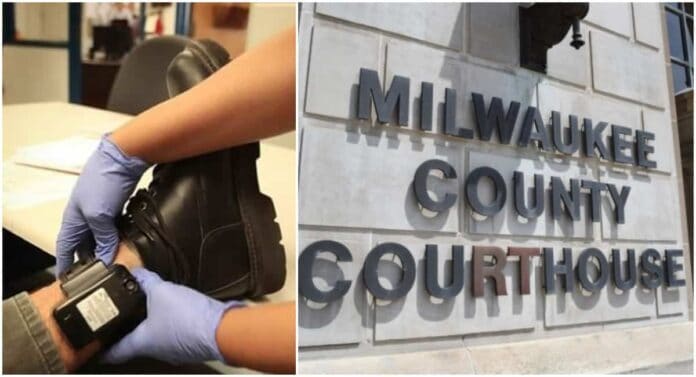 There are 125-150 defendants who are on a waiting list for electronic monitoring bracelets because Milwaukee County doesn’t have enough of them, Wisconsin Right Now has learned.

That means that defendants deemed high-risk by judges can’t be monitored as strictly as the judges want.

Milwaukee County has only 90 bracelets, Triggiano said. The courthouse backlogs, which we wrote about previously, mean that people are out on bail longer than before; thus, the number of people judges want on bracelets grows and, so too, does the waiting list.

At a County Board meeting on Dec. 2, Triggiano revealed the felony backlog is currently 1,600 cases with the misdemeanor backlog at 3,100 cases. “We are chipping away at it,” she said.

“It’s a longer waiting list than we’ve seen,” Triggiano said. Before COVID, there were about 70 bracelets and the waiting list was 20-30, she said.

Waukesha parade massacre suspect Darrell Brooks was not ordered to wear an electronic monitoring bracelet, according to court records, but his case – including release on low bail for two pending felonies in Milwaukee County – has amped up scrutiny on court processes and backlogs. It all comes at a time of rising violent crime, including homicide, in Milwaukee.

As usual, the chief judge was very transparent and forthcoming when we contacted her about the electronic monitoring bracelets. She responds quickly and answers all questions, providing data when requested.

Triggiano explained that, in the past, “for a very long time,” the county had about 70 GPS devices (electronic monitoring bracelets).

She said the devices are supervised through JusticePoint, which is a non-profit that contracts with Milwaukee County to provide pretrial services, including public safety assessments and pretrial supervision.

It’s up to judges whether they want to order electronic monitoring devices for a defendant.

But devices don’t always exist when they do, and that’s a growing problem. Triggiano explained that ankle bracelets use GPS technologies to monitor geographic restrictions.

“They are supposed to be monitored on a minute-to-minute basis,” she said. Because of this, it’s not so simple to just add more bracelets, she said; more case managers are needed.

She noted that “not everyone should be put on electronic monitoring, especially if there is no need.” It should be based on an individual’s risk level, she said. Rather than a shortage, she said there is a “defined capacity for the program based on funding and staffing.”

Triggiano said she and other officials have worked hard to “up the amount” of bracelets. They added 20 additional devices, upping the amount to 90. For a time, they used federal COVID dollars to expand to 110 but then those dollars went away. They also used CARES dollars at the end of 2020 to add additional case managers.

“In 2021, we are back to 90 because the CARES dollars ran out,” said Triggiano, who said court officials have “connected with the County Board,” asking for additional funding, perhaps through federal money sent to the state.

As for Brooks and electronic monitoring, she said she could not speak about specific cases but noted that “if you look at the court record, it wasn’t ordered.”

Some people waiting for bracelets are in custody on higher bail amounts, but some are out on bail.

“We’ve been monitoring this,” she said.