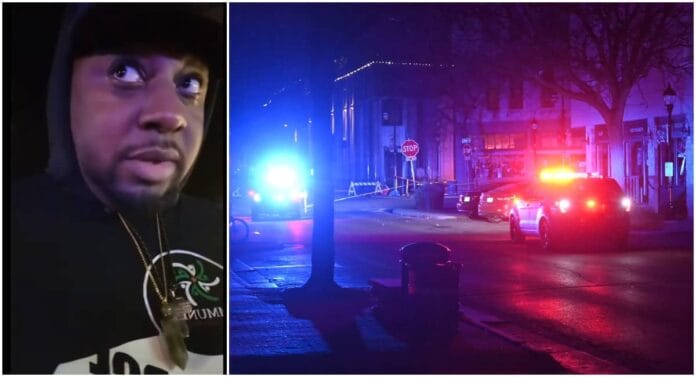 On the evening of Nov. 21, 2021, shortly after the Waukesha Christmas parade massacre happened, Milwaukee BLM activist Vaun Mayes went to the scene and declared on livestream video: “It’s possible the revolution has started in Wisconsin.”

At least five people were killed and more than 48 injured in the parade horror. While there, Wisconsin Right Now’s Jim Piwowarcyk observed several Milwaukee BLM activists, some of whom have ties to the “Peoples Revolution,” a BLM organization, arrive on the scene.

We overheard the activists saying they had just arrived from Kenosha while protesting over the Kyle Rittenhouse verdict continued.

We observed Milwaukee community activist, Vaun Mayes, live streaming over Facebook from the scene when he stated, “It sounds possible that the revolution has started in Wisconsin’

“I said I wasn’t going to speak on no rumors. Y’all are repeating some of the stuff that, you know, that has come up. And I can tell you that the initial person who reached out to me said that they believe that this has to do with the verdict, and so I made an assumption of which side it would be from, but I don’t know.”

Last year, WRN wrote an article about Vaun Mayes, you can read it here. The Milwaukee news media continues to quote him as a supposedly credibly community activist in anti-police stories even though he’s still on pretrial release on federal charges in the allege Molotov cocktail plot to bomb a Milwaukee police precinct.

A portion of the Vaun Mayes video can be watched here. Mayes makes the comment about one minute into the video.

Mayes has positioned himself as one of the key leaders of BLM in Milwaukee, showing up at protests, criticizing the police in inflammatory terms, and being arrested after a bizarre incident in which a Milwaukee house was targeted by a crowd over unproven sex trafficking accusations.

Court documents filed by his lawyer revealed that the Milwaukee County District Attorney, John Chisholm, also “no processed” that case against him. We asked Deputy District Attorney Kent Lovern about that, and he confirmed the DA decided not to charge Mayes for the incident relating to the house, saying, “We completed our review of this matter during the summer and determined there was not sufficient evidence to support a criminal charge against Mayes because no other person at the scene was identified who could indicate why he was in the residence. There was no evidence that connected Mayes to items taken from the residence or to the subsequent arson of the residence.”

Last year, Vaun Mayes tracked Wauwatosa Police Officer Joseph Mensah down to a Milwaukee restaurant, where he live-streamed the officer and his girlfriend, calling Mensah a “punk.” He is one of the three most prolific BLM leaders. Protester Ronald Bell is charged with a felony for allegedly discharging a firearm at Mensah and his girlfriend, who was left with bruises, in a previous incident. Was Mayes there when all of that went down? That’s not been established either way. Mayes has not been charged or accused of any wrongdoing in connection with the Bell situation.