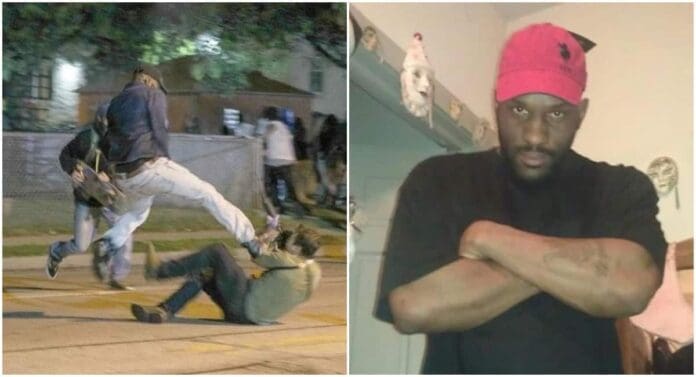 Maurice Freeland, a felon with a long criminal history and an open domestic violence charge, is accused of being the mysterious supposedly unidentified man known as “Jump Kick Man” during the Kyle Rittenhouse trial.

Wisconsin Right Now has learned from a law enforcement source in a position to know that prosecutors informed the Rittenhouse defense team only last Thursday, Nov. 11, 2021, as the trial came to an end, that Freeland had come forward claiming to be Jump Kick Man.

It’s not clear when Assistant District Attorney Thomas Binger and his boss, DA Mike Graveley, first learned about Freeland’s claims, the source said. Clearly, it would be a much bigger issue if the prosecution knew his identity for longer because the defense might have wanted to call or cross-examine him or track him down and vet the story; Wisconsin Right Now wrote Graveley and Binger and asked them for comment, and neither wrote back.

Our source added additional details, saying that authorities were unable to do effective facial recognition analysis to prove definitively that Freeland was Jump Kick Man because videos and photos don’t show enough of his face, partly because he was masked.

Jump Kick Man, who delivered a flying kick to Rittenhouse’s head after Rittenhouse fell to the ground, a move caught in some of the most searing imagery in the case, supposedly remained unidentified until the end of the trial; the jury instructions, which charge Rittenhouse with endangering his life, refer to him as an “unknown man.”

See the reference to him in jury instructions here:

Jump Kick Man – as he was referred to by all parties in the court – was never named in court, and he was not called to the stand. The jury went into deliberations thinking his identity was “unknown.” The Rittenhouse jury deliberated for a day without reaching a verdict, concluding at about 5:45 p.m. on Nov. 16, 2021. They will resume deliberations Wednesday morning.

In closing arguments, which took place after our source says Binger told the defense that Freeland claims to be Jump Kick Man, He described him this way: “This man that the defense wants to call Jump Kick Man, he’s got no weapons, no gun, no knife, no nothing, comes in and tries to kick the defendant in the face.”

At another spot in closing arguments, Binger told the jury, “And these folks that are coming at him, the Jump Kick Man, Anthony Huber, aren’t armed, they’re not a credible imminent threat to his life…He saw the defendant shoot at Jump Kick Man at close range, miraculously missing… He (Rittenhouse) put jump kick man’s life in jeopardy.

Defense attorney Mark Richards, in closing arguments, said, “Count three, Jump Kick Man, the uncomplaining unidentified witness in count three…Jump kick man comes in, kicks him in the face, spins his body 180 degrees…Even Gaige Grosskreetz said he was concerned about the blows that Jump Kick Man and Anthony Huber were inflicting on Kyle’s head…We saw video earlier of this individual starting the Duramax on fire right here, jump kick man.” He came up multiple times in both closing arguments but never by name.

Freeland has several Facebook pages. His most recent is in the name of Maurice Gohard Freeland and says he also goes by the name King Reese. It doesn’t have much on it that’s visible.

We hit the streets of Racine and Kenosha, Wisconsin, on the night of November 16, 2021, knocking on the doors of four addresses attached to Freeland and his soon-to-be ex-wife. One address was only a block from the courthouse and a few blocks from the Rittenhouse shooting scenes; it was listed as his current address in a small claims case as of November 15, 2021. No one appeared home, and two men hanging out in a nearby yard didn’t know who he was.

Freeland was into the wind and no longer living at the addresses. He was recently in the Kenosha County Jail, but the jail told us he’s no longer there. Our source said he might be out of state now. We have other leads and will continue trying to get his side of the story (if you know Maurice Freeland, write us at [email protected]).

A man who lived at one of the homes for three years said the residence had a new door because the last one was kicked in because a “drug dealer” had lived there, but he didn’t recognize Freeland’s name. A woman at a Racine address attached to him in recent court records said she wasn’t in contact with him anymore, and she wouldn’t open the door of her home, which had a Black Lives Matter sticker on the window. At first, she didn’t seem surprised to hear he’s being accused of being Jump Kick Man, but then she said she didn’t know anything about it. Through social media, we wrote Maurice Freeland, his soon-to-be ex-wife, a woman close to him, but received no response.

Maurice Freeland was on the streets the night of the Rittenhouse shootings less than two months after getting a plea deal and probation in a domestic abuse case. Binger referred to the men who attacked Rittenhouse as people stopping an “active shooter.”

Maurice Freeland has open charges for drunk driving with a passenger under 16, disorderly conduct with a domestic abuse modifier, and marijuana possession. The case was filed in June 2021, in Kenosha County. He’s out on a $1,500 signature bond. Court records say he was in court for a status conference in that case on October 29, 2021, and he had just been released from custody.

Jump Kick Man is a critical figure because Rittenhouse is facing a serious charge relating to allegedly shooting at, and missing, him. His attorneys argue that Rittenhouse acted in self-defense. Rittenhouse shot and killed Anthony Huber a few seconds later; Huber was hitting him with a skateboard and trying to grab his gun when he opened fire. Then, Gaige Grosskreutz, per his own testimony, moved toward Rittenhouse while pointing a gun at him, and Rittenhouse shot him.

2. Slow motion video of shots fired at an unidentified man, referred to at trial as jump-kick man. #KyleRittenhouse pic.twitter.com/sX59OVoru7

During opening statements, Binger called him “the unknown individual.”

In the case shortly before the Rittenhouse shootings, Maurice Freeland was convicted of domestic abuse battery, a misdemeanor. Other charges were dismissed or read in, in exchange for his guilty plea in a plea agreement. Binger was the attorney for the state at his March 23, 2020, initial appearance. On June 29, 2020, Judge Mary Kay Wagner sentence Maurice Freeland to 12 months probation.

That was less than two months before the Rittenhouse shootings.

There was a probation review hearing on March 11, 2021. He was kept on probation with DV programming by Judge David Wilk. His probation was extended six months.

His probation was revoked on August 16, 2021, and he was sentenced to seven months in the Kenosha County Jail with Huber privileges and 77 days credit.

There was a petition for child support filed against him in 2016. Court records, in that case, refer to him being in custody.

He has several past evictions.