Rittenhouse Motion for Mistrial: State Did Not Turn Over Full Size Drone Video Until Trial Ended 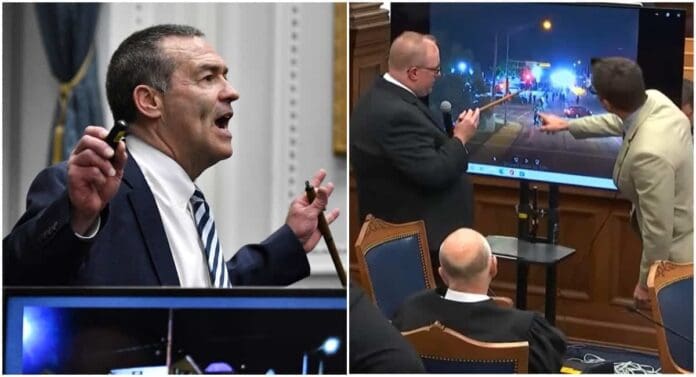 The video, which was in the state’s possession, “wasn’t provided to the defense until after the trial concluded,” wrote the Rittenhouse defense attorneys.

Prosecutors in the Kyle Rittenhouse trial gave the defense team a more compressed, less clear last-minute drone video than they had, putting the defense in a weaker position, according to a defense motion seeking a mistrial with prejudice.

The video, which was in the state’s possession “wasn’t provided to the defense until after the trial concluded,” wrote the attorneys.

The motion is for a mistrial with prejudice, which means, if granted, that the state could not retry Rittenhouse. The complaint was raised in court previously verbally and the judge indicated he was taking it under advisement but never gave a formal ruling. It was filed Nov. 15, 2021, the day before the jury headed into deliberations. The jury did not reach a verdict Nov. 16; jurors were expected to continue deliberations on Wednesday.

The state also brought up a video in court that had been discussed on Aug. 18, 2021, in a second other acts motion filed by the state, the motion says. It sought to admit evidence regarding a video “showing the defendant sitting in a vehicle having a discussion regarding what he would like to do to people he believed were looting.”

Judge Schroeder indicated he was taking the motion “under advisement with a bias against admitting the evidence.”

The state did not file a motion for reconsideration.

The motion accuses Binger of violating the court’s order on other acts’ evidence by telling Rittenhouse, “you have previously indicated that you wished you had your AR 15 to protect someone’s property.” The court admonished the state, and the defense moved for a mistrial with prejudice.

On Nov. 8, 2021, Rittenhouse testified in court. The judge said there “was nothing that the Court heard in the case that would change the Court’s mind on any of the rulings.”

On cross-examination, the state asked the defendant, according to the motion, “Since August 25, 2020, this is the first time you told this story.” The defense objected, and the court sustained it.

Shortly thereafter the prosecutor said, “…now you are telling your side of the story.”

The court excused the jury and reminded the state “that the defendant has a constitutional right to post-arrest silence. The court indicated that the prosecution was either over the line or right up on the line and that the court didn’t want any other problems,” the motion says.

Binger said, “I thought, my good faith belief – you had left the door open a little bit, now we had something new and I was going to probe it.” Schroeder responded, “I don’t believe you.”

The state played their version of the drone video for Schroeder to review during jury instructions conference. They indicated their video was much clearer and had their tech person come into court, says the motion.

The video is the same but the resolution was not. The state “did not provide their quality video to the defense until Nov. 13, 2021, and only upon a specific request – two days before closing arguments and after the evidence had been closed,” says the motion.

In order to bar a new trial in the event the mistrial motion is granted, the prosecutor’s action must be intentional or designed to create another chance to convict, to provoke a mistrial to get another kick at the cat because the first trial is going badly.

“The prosecutor’s conduct was clearly intentional,” wrote the defense attorneys.

The prosecution should be required to explain to the court why they did not copy the footage for the defendant with the same quality as their copy, the defense wrote, noting that “the video footage has been at the center of this case. “The idea that the state would provide lesser quality footage and then use that footage as a linchpin in their case and it is the very reason they requested and were granted the provocation instruction by the court. The failure to provide the same quality footage in this particular case is intentional and clearly prejudices the defendant.”

The defense says the testimony “in this case up to that point had not gone very well for the prosecution. “

Jack Posobiec, Senior Editor of @HumanEvents, was first to break the story of the motion and posted the entire motion on his Twitter page.