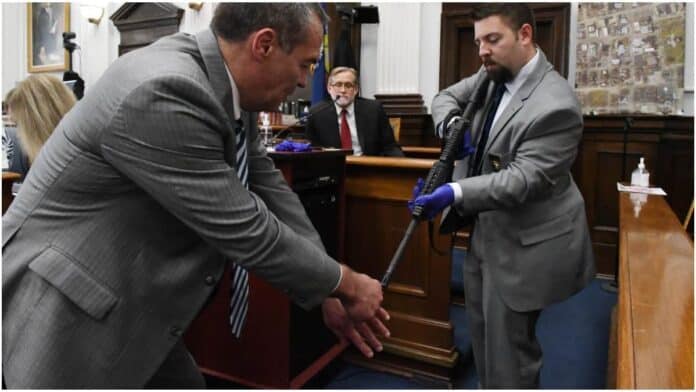 After the medical examiner’s testimony, the state rested its case without a coherent theory to counter self-defense. The 7th count, a curfew violation citation, was dismissed by the judge.

Joseph Rosenbaum’s hand was either very close or in contact with Kyle Rittenhouse’s rifle when Rittenhouse shot him, a medical examiner testified in court, strengthening the defense argument that Rosenbaum was lunging for Rittenhouse’s gun.

Dr. Douglas Kelley also testified that Rosenbaum had “forward momentum” that wasn’t from the first shot, which was to the hip, as his body moved closer to Rittenhouse. The hand shot was the second wound.

The defense attorney, Mark Richards, asked Kelley, “That hand was over the barrel of Mr. Rittenhouse’s gun when his hand was shot?” Kelley responded, “That makes sense.”

All of this happened when Rosenbaum was in very close proximity to Rittenhouse (and closer for the second than the first shot) in less than a second. According to Kelley, Rittenhouse was no more than four feet away from Rosenbaum when he first fired, hitting him in the hip; he may have even been closer. He was closer yet for the hand shot.

This all backs up the defense claims that Rosenbaum posed a threat to Rittenhouse at the time Rittenhouse fired and its consistent with him lunging. Anthony Huber’s autopsy photos were also played in court. They were very graphic. But the testimony also was consistent with the state’s case.

The testimony came from the final state’s witness but he didn’t do the prosecution any favors. Kelley and attorneys in the case dramatically demonstrated the trajectory of Rosenbaum’s wounds, with an attorney and detective at times using a rifle to do it. They also showed graphic autopsy photos in court.

Rittenhouse is on trial for the shooting deaths of Rosenbaum and Anthony Huber, as well as the wounding of Gaige Grosskreutz. Rosenbaum’s death is key because it was the first, igniting the chain of events during a night of rioting.

The Rosenbaum hand shot was the second of four; Kelley testified that the first gunshot struck Rosenbaum in the hip. He also testified, though, that Rosenbaum’s momentum was moving forward already, and that he wasn’t propelled forward by the hip shot. He was then shot in the hand. Kelley couldn’t tell the order of the third and fourth shots – to the head and back – but he testified that Rosenbaum was in a horizontal position when they were fired, describing it as sort of a Superman move with hands extended forward. He made it clear that Rosenbaum did NOT have his back turned to Rittenhouse when the back wound occurred and that it wasn’t the first wound.

The state then rested after a week and 1.5 days of witness-after-witness and video-after-video that strengthened Rittenhouse’s claim of self-defense.

Kelley’s testimony is also consistent with the eyewitness testimony of Richie McGinniss, who scored points for the defense when he testified previously that Rosenbaum was lunging for Rittenhouse’s gun and trying to get it when he was shot. McGinniss testified Rosenbaum either made grazing contact with the gun or got close to it, but he couldn’t tell which.

Why this matters: The defense is arguing that Rosenbaum tried to disarm Rittenhouse and posed a threat. Under self-defense laws, Rittenhouse must show he reasonably believed his life or that of another were in danger or that they could face imminent great bodily harm. If he can do that, he will be acquitted due to self-defense.

Even if Rosenbaum didn’t literally touch the gun, of course, it doesn’t wreck the self-defense claim because Rosenbaum could still be a threat. The fact he was chasing Rittenhouse, got so close and that evidence indicates he was lunging can establish that. Video shows Rosenbaum was chasing Rittenhouse, and McGinniss testified that Rosenbaum, who was acting violent, belligerent and agitated that night, including using a racial slur, cornered Rittenhouse into a “dead end.”

Kelley, as with other witnesses who hurt the prosecution’s case previously, was actually a prosecution witness. However, as with the other witnesses, he helped build the case for self-defense instead. Nowhere was that more true than when it came to his testimony about Joseph Rosenbaum’s hand.

The closeness of a gun to a body part can be determined by soot.

“This is a close-range wound with soot,” Kelley testified of the wound to Rosenbaum’s hand. “Whether it’s in contact or whether it’s just in front of the entrance portion to the wound or inches away, that’s not something I can tell you.”

The prosecution asked if it was possible that, after Rosenbaum was shot in the hip, he might have fallen for and reached for the gun to swipe it away.

Kelley said that the scenario was possible. He said Rosenbaum continued down in a horizontal position. The shot to the back and head occurred when he was more horizontal to the ground.

But then defense attorney Mark Richards said, “When you’re shot the first time, it doesn’t cause you to go forward?”

“No,” Kelley said, agreeing it doesn’t.

Richards asked Kelley whether Rosenbaum was already in “forward momentum” to go from the 1st shot to the second in a fraction of a second.

Richards and Kelley explained that soot is found in a wound when the gun is a few inches away or very close to the body. The soot is within inches. Stippling is within four feet.

“It was either very close or in contact; we’re talking about the hand,” Richards said.

“Yes, it can be within that range; it could have been contact,” responded Kelley.

On the back wound, Kelley made it clear:

“We’re not saying he was turned and shot in the back correct?” asked Richards. “That’s correct,” said Kelley.

Richards asked Kelley whether the “position of lunging would put you in a horizontal position,” and Kelley said, “Correct.”

The second to the fourth shot occurred in less than a second.

He said the head wound “would be” consistent with the defense attorney, in Richards’ words, “turning like a bull and diving.”

The medical examiner testified that Anthony Huber died from a gunshot wound to the chest. Defense attorney Mark Richards asked whether, per what’s captured on video, Huber “pulls the firearm from one direction and into his chest?”

“They end up in that position. I don’t know if he’s pulling,” Kelley said.

His testimony on Huber only bolstered the defense argument – backed up with video and photo earlier in the trial – that showed Huber got a hand on Rittenhouse’s gun right before he was shot. Huber also hit Rittenhouse with a skateboard and was rushing him, video shows. 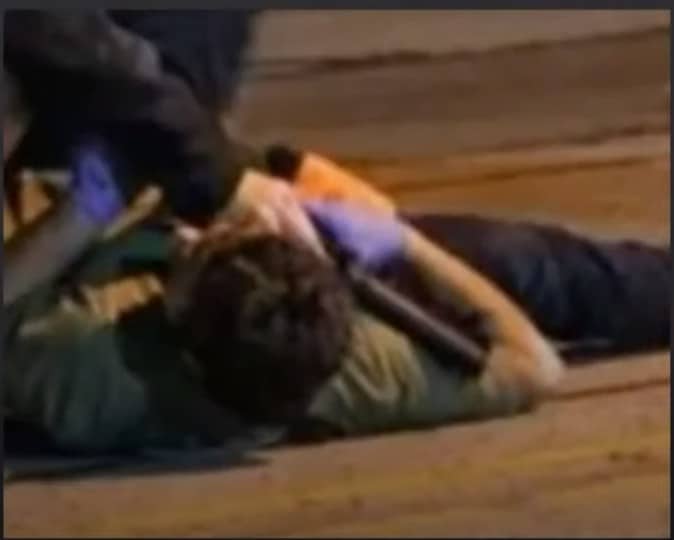 “It appears so, yes,” said Kelley.

“When Huber strikes him with the skateboard, the gun is not in his chest?” asked Richards, establishing that Rittenhouse didn’t shoot until he was struck (a strong argument for self-defense).