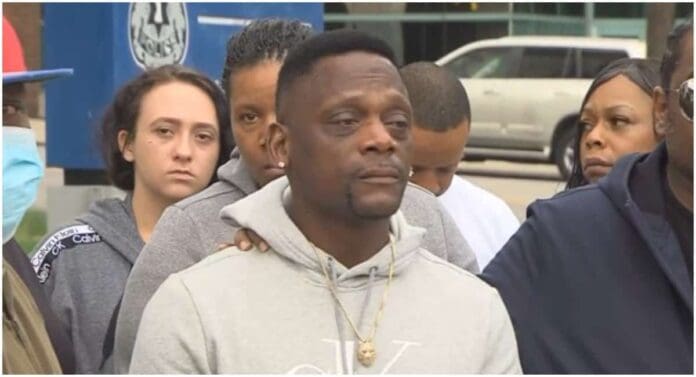 Carlton Harris, the father of murdered child Major Harris, has repeatedly bashed Milwaukee police in televised press conferences, but what the media haven’t told you is that he’s wanted on warrants in multiple cases across three counties for various offenses, has open charges for serious domestic-abuse related violent felony crimes, and has a child support lien through the Wisconsin Department of Children and Families.

We thought long and hard before publicizing the open warrants and criminal charges of a murder victim’s father and wouldn’t do so in most cases. However, Carlton Harris has stepped out of the grieving father’s role and has chosen to trash Milwaukee police; furthermore, he doesn’t appear to have been very involved in his son’s life. Those facts – and the EXTREMELY serious and widespread nature of his warrants and charges – means the public deserves to know the full story to judge his comments against authorities, which have been widely reported in the news media, which has pushed the family’s GoFundMe page.

He’s literally trashing the police while being wanted by the police in counties from La Crosse to Sauk. If you’re going to publicly bash the police on TV, the fact you’re currently sought by the police becomes relevant.

Major Harris and his mother Mallery Muenzenberger were murdered in a vile and horrific attack that might be related to domestic violence. We join the entire community in grieving the horrific, untimely, and despicable murders of this small innocent child and his mom.

Carlton Harris had nothing to do with those offenses; however, the fact is that he was running around allegedly committing crimes in multiple counties in the years leading up to the child’s death, and more recently living in another state (West Virginia). According to CBS 58, he said of Major’s mother that he “wasn’t involved in her personal life.” Mallery’s family said she was a single mom and that she and her extended family were raising Major. In fact, Harris is not letting Major be buried with his mom; he will be buried in a different city.

Mallery’s family, who was actually raising the child, thanked Milwaukee police in a statement.

Sauk County: Carlton Harris is charged with serious felonies: false imprisonment (domestic abuse), and take and drive a vehicle without owner’s consent. He’s also charged with misdemeanor battery and disorderly conduct (domestic abuse). A bench warrant was issued on Nov. 13, 2020. The court records say there was a “notice of completion” on Jan. 27, 2021, but there are no notations since. The warrant was issued when Harris didn’t show up for court.

La Crosse County: Carlton Harris is wanted on a warrant for two misdemeanors, retail theft and bail jumping. A bench warrant was issued on Sept. 17, 2020, when Harris didn’t show up for court. That was the last hearing date in court records.

In a separate case, Harris is wanted on a warrant on open misdemeanor charges of operating after revoked, disorderly conduct (domestic abuse). A bench warrant was issued on Aug. 24, 2021. There are no other hearings listed in court records. “Unable to forward,” court records say under his address.

Dane County: Outstanding warrant in a domestic violence civil injunction against Carlton Harris. The warrant was issued on Oct. 6, 2020 when he didn’t show up at a hearing to surrender firearms. It remains outstanding. (It’s not the first restraining order sought against him).

In addition, an arrest warrant was issued in a criminal traffic operating after revocation case in the same county on Oct. 5, 2020. It, too, remains outstanding. He didn’t appear for court.

In addition, the Wisconsin Child Support Agency took both Harris and the Major’s mom, Mallery Muenzenberger, to court in 2019. Placement of the boy was given to Mallery, and Carlton Harris was ordered to undergo job searches and pay some costs. She did not request child support. He also has a paternity action involving another child for which the court made findings against him of contempt.

Carlton Harris has a child support lien through the Wisconsin Department of Children and Families for $14,496.40. That lien was filed through Dane County on Oct 6th, 2019. It’s not clear which child the support lien was for; Major Harris was not his only child.

In 1997, he was convicted of serious felonies: first-degree recklessly endangering safety with use of a dangerous weapon, bail jumping and misdemeanors for possessing a dangerous weapon, carrying a concealed weapon, and obstructing and resisting an officer, in Dane County. He was sent to prison in that case.

That same year he was convicted in Dane County of felony cocaine dealing.