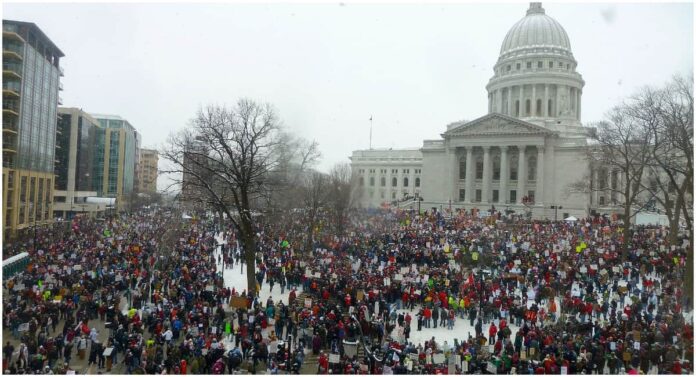 Estimates say Act 10 saved taxpayers in Wisconsin $14 billion over the past decade.

Ten years after it became law and changed what Wisconsin school teachers can include in their school contracts, Democratic lawmakers in the state continue to try and rollback Act 10.

Sen. Chris Larson, D-Milwaukee, and a handful of Democrats this week introduced what they are calling the Collective Bargaining for Public Education Act.

Republicans, under Gov. Scott Walker, approved Act 10 as a way to curb the skyrocketing cost of teacher salaries and benefits. Act 10 limits teacher contract negotiations to salaries only. It also requires teachers to pay more toward their healthcare and retirement.

“Wisconsin’s public education sector has a unique and critical role to play in our state. To ensure the effectiveness of these institutions, we rely on highly qualified individuals and their talents to move our state forward,” Larson said in a statement. “The legislation we have introduced establishes the right of employees of school districts, CESAs, technical college districts, and the UW System to collectively bargain over wages, hours, and conditions of employment.”

“Government has used the tools of Act 10 to control costs, saving taxpayers billions and billions of dollars,” CJ Szafir with the Institute for Reforming Government told The Center Square. “To reverse that – and require collective bargaining – would require a massive tax increase on hardworking Wisconsin families or gutting public programs.  There’s no other option and Democrats need to be honest about those trade-offs.”

“Wisconsin’s public schools are struggling to educate children in reading and basic civics. We have one of the worst racial achievement gaps in America,” Szafir added. “Instead of focusing on these core problems, the bill is trying to relitigate lost battles of 10 years ago in the hopes of exciting Madison progressives. This plan is a clear giveaway to union bosses and special interests at the expense of the taxpayer.”

Szafir says Act 10 is now popular with people in Wisconsin because it saves them money and gives them choices. He says Democrats at the Capitol can’t accept it.