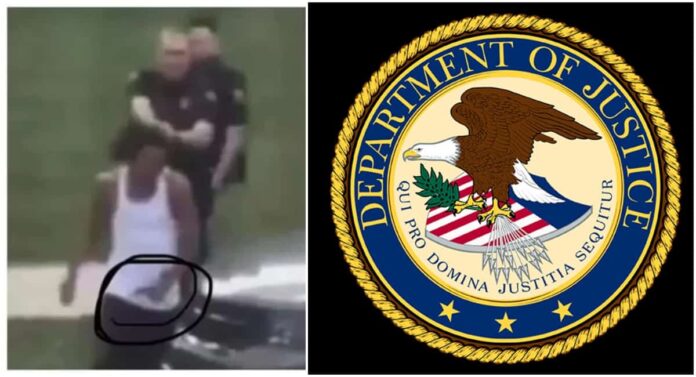 Sheskey shot Jacob Blake last summer, which resulted in days of violent riots, arson fires and a shooting in which two men were killed and another injured.

In a statement, the DOJ said, “The department makes this decision because the evidence obtained is insufficient to prove that the KPD officer willfully used excessive force.”

Sheskey shot Blake, 30, on Aug. 23, 2020 during a domestic response call. Blake, who had an active sexual assault warrant, fought with officers and attempted to flee the scene in the caller’s vehicle, which was occupied by Blake’s two children.

Despite the exhaustive reviews that cleared the officer, Gov. Tony Evers rushed to judgment against him, releasing a statement that read, “While we do not have all of the details yet, what we know for certain is that he is not the first Black man or person to have been shot or injured or mercilessly killed at the hands of individuals in law enforcement in our state or our country.”

On the one-year anniversary of Blake’s shooting, even after the DA cleared the officer, Evers doubled down, expressing sympathy for Blake in a lengthy statement.

Sheskey said that Blake twisted toward him with a knife. He and another officer made a failed attempt to tase Blake, who was wanted on a warrant. Blake’s children were in the car. Blake admitted having a knife, the DOJ says. The officer repeatedly ordered Blake to drop the knife, but he did not comply. Blake continued to fight with the officers and at one point put an officer in a headlock. Blake had a felony arrest warrant for a domestic violence incident that included a charge of third-degree sexual assault (the latter charge was later reduced in a plea deal).

Kenosha erupted with riots for several nights resulting in arson and multiple arrests and property damage. During one night of riots, Kyle Rittenhouse, allegedly shot and killed two men and wounded a third. He claimed he fired in self-defense. Rittenhouse’s trial is scheduled to begin Nov. 1.

The Justice Department announced today that it will not pursue federal criminal civil rights charges against a Kenosha Police Department (KPD) officer for his involvement in the Aug. 23, 2020, shooting of 30-year-old Jacob Blake.

Officials from the Justice Department’s Civil Rights Division and the U.S. Attorney’s Office for the Eastern District of Wisconsin informed representatives of the Blake family of this determination. The department makes this decision because the evidence obtained is insufficient to prove that the KPD officer willfully used excessive force.

A team of experienced federal prosecutors from the Civil Rights Division and the U.S. Attorney’s Office reviewed evidence obtained by the FBI and state investigators to determine whether the police officer violated any federal laws, focusing on the application of deprivation of rights under color of law, a federal criminal civil rights statute that prohibits certain types of official misconduct. They conducted a detailed and lengthy analysis of numerous materials, including police reports, law enforcement accounts, witness statements, affidavits of witnesses, dispatch logs, physical evidence reports, photographs and videos of some portions of the incident.

Under the applicable federal criminal civil rights laws, prosecutors must establish, beyond a reasonable doubt, that an officer “willfully” deprived an individual of a constitutional right, meaning that the officer acted with the deliberate and specific intent to do something the law forbids. This is the highest standard of intent imposed by the law. Neither accident, mistake, fear, negligence, nor bad judgment is sufficient to establish a willful federal criminal civil rights violation.

After a careful and thorough review, a team of experienced federal prosecutors determined that insufficient evidence exists to prove beyond a reasonable doubt that the KPD officer willfully violated the federal criminal civil rights statutes. Accordingly, the review of this incident has been closed without a federal prosecution.