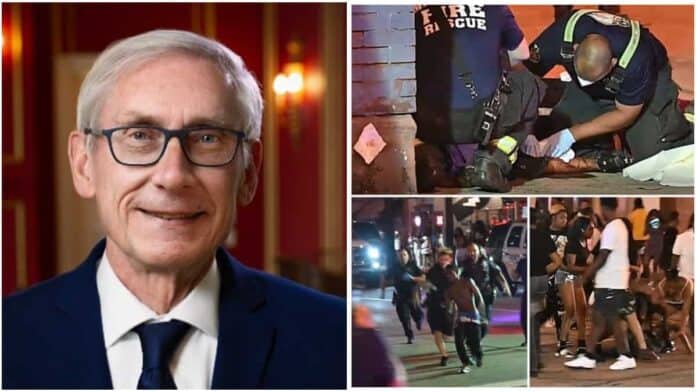 We reject the notion – adopted by Evers and Republicans in the state Legislature – that police need major reforming. This hoax narrative falsely presumes that there’s a systemic problem with our Police Departments. There’s not. There have been only 3 fatal police shootings in Wisconsin this year, all of armed people, none black. Meanwhile, there are many black homicide victims, but the governor isn’t acting on that.

When he signed a raft of window-dressing, do-nothing “police reform” measures this week, Gov. Tony Evers said this: “The people of Wisconsin are demanding systemic changes and reform in our state.”

No, they’re not. At least not the kind of “reform” he’s talking about.

This was an attempt to pander to BLM that will do nothing to improve black lives. If Evers really cared about black lives, he’d focus on the climate that produces black-on-black homicide in the City of Milwaukee and elsewhere, maybe heading down to Water Street. As for Republicans, they made it clear from the start through leaked emails that they weren’t actually interested in reform; they were interested in the appearance of reform. While that’s better than passing things that would cause serious damage (like abolishing qualified immunity,) we want our elected Republicans to stand up and say, “Law enforcement is not the problem.”

We think most Wisconsinites aren’t focused on police reform. They want PUBLIC SAFETY, and they recognize that this means supporting and properly funding police departments, not reforming them. Why doesn’t Evers talk about the real problems? Don’t believe us? A recent Suffolk University/USA Today poll of City of Milwaukee residents found that most Milwaukeeans oppose defunding the police, don’t think police are racist, think police “generally do a good job,” and would feel safer with more cops in their neighborhoods.

It’s only a handful of activists and the Democratic politicians and media organizations that pander pathetically to them who think police need reforming. Enough.

People overwhelming believe that “public safety” is the biggest issue facing the City of Milwaukee today (21.4%) compared to only 7.8% who listed “police reform,” the poll found.

So why is Evers so out of step with what most people think? The poll surveyed Milwaukee residents, who tilt Democratic and Independent. Imagine the numbers in conservative counties. More importantly, why are Republican legislators so out of step with the public on this? Is everyone really that worried about BLM showing up at their front door? Trust us, they’re a paper tiger. Do the right thing, and stop pandering.

Let us be clear. We want “bad apple cops” weeded out too, just like we want bad apple people weeded out of every profession. What we reject, though, is the notion – adopted by Evers and weak-kneed Republicans in the state Legislature – that police need reforming. This narrative falsely presumes that there’s a big problem with our Police Departments. There’s not.

What’s the pretext? The cries for “police reform” are based on a hoax narrative of so-called “police violence,” a term that falsely implies most police shootings or use-of-force incidents are somehow unjustified. Yet time and again, we’ve seen the handful of loud activists who’ve become media darlings trashing police and calling for criminal charges against officers who were clearly defending their own lives and sometimes were even being fired at or attacked.

It’s all window dressing besides. Evers signed a bill banning chokeholds except in life-threatening situations, despite the fact that Milwaukee police, to cite the largest agency in the state, don’t use them now. The bill is actually removing a non-lethal response option from officers, however. There could be a situation where an officer, knowing he or she can’t use a chokehold, will more likely to resort to deadly force and a shooting. Has there even been a police-related death in Wisconsin from a chokehold? If so, it’s exceptionally uncommon.

Year to date, no blacks have been fatally shot by police in Wisconsin. According to a Washington Post database, Wisconsin law enforcement fatally shot only three people in 2021 to date, two white males and a Hispanic male. One man was an active shooter at the Oneida casino who had just murdered two people. One man randomly entered homes and murdered two men in Kewaskum. The third man was shooting a gun off on his Milwaukee porch and refused officers’ orders to drop it, police said.

Yet many black lives have been lost to homicide. The Milwaukee County Medical Examiner’s Office lists 87 black homicide victims this year to date. History would show that most of them were killed by other blacks. The Milwaukee Homicide Review Commission used to create detailed reports studying homicide. “In both 2014 and 2015, Black individuals made up over 80% of the suspects. This is consistent with prior years,” they wrote in 2015, the most recent report available.

The highest-profile claims activists make against officers in fatal shooting deaths in the area have centered around a man who was attacking a police officer with his own baton, an armed man who was fleeing police with a gun, and an armed teen who took a gun to a popular shopping mall; it discharged near officers. To combat our claim “police violence” in Wisconsin is a hoax, you have to provide better evidence of police brutality than that. Thus, the anti-police agitators basically are arguing that police should be asked to forfeit their own lives.

Since 2015, according to the Washington Post database, 103 people were shot and killed by police in the entire State of Wisconsin, which is about well under last year’s Milwaukee homicide numbers in non-police related incidents alone. The Post says only 5 of those 103 people were unarmed (and unarmed doesn’t necessarily mean unjustified).

Also: More whites (64 of them) were killed by Wisconsin police in that time frame than any other race. According to the Post, fatal police shootings in Wisconsin have declined since 2017, and they are on pace to be significantly down in 2021.

Yet Evers is focusing his energy on police “reform”? Why? What’s the predicate for “police reform”?

Even more egregious, Evers and radical anti-police Lt. Gov. Mandela Barnes previously wanted to ban chokeholds in all cases – in other words, they wanted an officer to have to forfeit his or her life and die rather than use a chokehold. They wanted officers to have less right to save their own lives than you and I would have in a life-and-death situation. Sickening.

The governor also signed a bill that would make policies on officer use of force public and require an annual state report on use of force. Fine. We’re all for transparency, and we suspect it will just prove the narratives are a hoax, but it’s not going to do anything to reduce crime, which is the real issue we should all be talking about.

Hilariously, Evers did one thing right; he signed a provision to fund a community-oriented policing grant. Great. We’re all for funding the police, after all. The Assembly did approve a bill to penalize cities that defund police. Although that raises concerns of local control, it’s at least emphasizing the right narrative. However, that narrative is muddled by their tepid focus on “police reform.”

“Based on these data, one can conclude that use of force in subject stops is a rare event, and the use of force in traffic stops is even more uncommon,” wrote the professor, Steven G. Brandl, who made the report. Many things constitute use of force, including incidents with dogs and pepper spray use. “The use of a firearm in a use of force incident was an uncommon event,” wrote Brandl.

Don’t bring up George Floyd. An aberrant incident in another state isn’t justification for change here.

Worse, focusing on “police reform” shifts attention from the real problems in society: Skyrocketing crime and the culture that produces it, including missing fathers, disrespect for authority and for life, lack of a quality education (Evers, support school choice expansion if you want to improve things), and government policies that reward non-work. If you don’t believe us, go down to Water Street with us next time. Where’s the governor’s plan to fix those things? We need more enforcement, not less. We know what worked: Broken Windows policing and truth-in-sentening. Instead, he’s balking at getting rid of the extra $300 in unemployment benefits that is encouraging a culture of non-work at a time when small business owners are desperate for workers. Instead, he’s yakking away about “police reform” that isn’t needed.

It’s astonishing that, at a time of historic crime explosions, Evers and Republicans in the Legislature are focusing their energy on insulting the folks (police) whose job is to restore and keep order. Police officers are under siege. Insisting they “need reform” buys into the completely unfair narratives against them and reduces morale. And that conversely risks public safety.