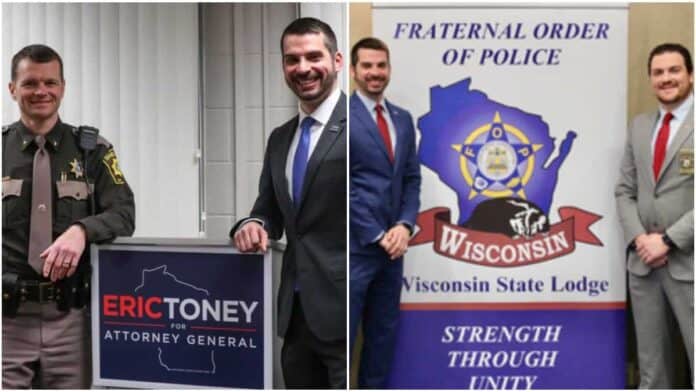 Eric Toney, the Fond du Lac County District Attorney who is running for state Attorney General as a Republican, has racked up the endorsements of more than 50 current and retired sheriffs, police chiefs, and district attorneys.

Toney is the president of the Wisconsin District Attorneys Association.

“As Fond du Lac District Attorney, Eric Toney has proven himself to be a tough but fair prosecutor,” said Ryan Waldschmidt, Fond du Lac County Sheriff. “He’s stood with law enforcement by working to keep violent criminals behind bars, encouraging programs to curb offenders from repeating, and ensuring deputies and officers have the legal knowledge they need to make sound decisions on the street when lives are on the line.  Please join me in endorsing Eric Toney for Wisconsin Attorney General.”

“Eric Toney has distinguished himself as a tough prosecutor dedicated to the safety of our communities,” said Ryan Windorf, President of Wisconsin State Lodge Fraternal Order of Police. “He has an exemplary track record of working with police to enforce and uphold the laws of the State of Wisconsin. Eric’s personal and professional achievements demonstrate a genuine support for law enforcement officers, as well as a deep understanding of the complex issues surrounding modern policing. His track record proves he is the best candidate for Attorney General – Wisconsin’s to law enforcement official.”

Sean Marschke, Sturtevant police chief and former President: Wisconsin Chiefs of Police Association, said, “Eric Toney is one of the toughest prosecutors in our state. And, he has the respect of his fellow prosecutors and cops on the street. Eric Toney is clearly the best choice for Attorney General. Violent crime has surged in our communities and we need to get back to basics and get tough on crime. We need a top cop who has experience in the courtroom taking on violent criminals. Now is not the time for a rookie.”

Toney is facing a primary challenger in University of Wisconsin-Madison professor Ryan Owens. We previously wrote about Owens’ endorsement by Waukesha County Sheriff Eric Severson. Both men are seeking the Republican nomination in an attempt to unseat liberal AG Josh Kaul.

Although it’s early, Toney appears to be shaping up to be the choice of more DAs and Sheriffs in the Republican primary; Owens is supported by some politicians/legislators and former Supreme Court justices.

Toney has been endorsed by 26 current and one retired Wisconsin district attorneys. They are:

Toney has been endorsed by 16 current and three retired sheriffs. They are:

He also lists these state and local official endorsements.

In a letter to Owens, Toney wrote that the endorsements are now up to 50. “More than 50 law enforcement officials and the Wisconsin Fraternal Order of Police have endorsed my campaign,” he wrote.

For his part, Owens has listed the following endorsements:

16 Co-Chairs – two each from all eight Wisconsin Congressional districts