Mandela Barnes for Senate: His Top 4 Most Shameful Moments 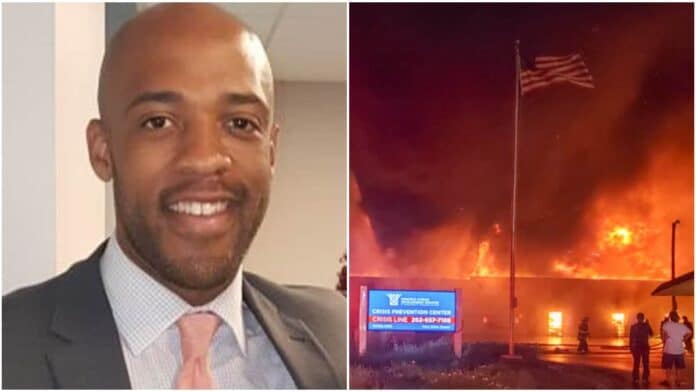 Lying about a college degree…helping incite a violent riot in Kenosha…here are Lt. Gov. Mandela Barnes’ top 4 most shameful moments.

What they’re not reminding you is that Barnes has a long history of absolutely shameful moments.

The state GOP noted, “Whether it’s lying about his college degree, his temper tantrums when being asked to explain his unpaid taxes, or his delinquent fines, ‘Make-it-up Mandela’ Barnes has neither the maturity nor the temperament to represent Wisconsin in the U.S. Senate.”

Mandela Barnes for Senate? The GOP pointed out that Justin Bielinski, Barnes’ former campaign manager, tweeted that he’s supporting someone else for Senate, on the same day Barnes announced, writing, “Proud to be supporting the most progressive candidate in Wisconsin’s Senate race, @ChrisJLarson. Someone who recognizes it’s not about him – it’s about what he can do to change lives for the better.”

Barnes is a candidate so flawed that we almost wonder whether Gov. Tony Evers and the Democratic leadership wanted to get him off the gubernatorial ticket by any means necessary. In a campaign Internet ad, Barnes’ campaign wrote, “I’m running because the system is not working for the hardworking people of Wisconsin. It’s time for change.” Wait!? Isn’t he second in charge of the state? Isn’t he helping run the system…?

Here are the top 4 Hall of Shame moments for Mandela Barnes:

1. His Shameful, Riot Inciting Tweets on the Jacob Blake Shooting

The state should expect that its lieutenant governor would not rush to judgment against a law enforcement officer and incite a violent riot before the facts were in. But that’s exactly what Barnes did. His comments on the Jacob Blake shooting were factually wrong, inflammatory, and arguably incited the riots that followed (Kenosha burned the night of Barnes’ tweet.)

On Aug. 24, 2020, the DAY after the shooting, Barnes rushed to judgment and recklessly and falsely wrote, “last night, Jacob Blake was shot in the back seven times in front of his children. This wasn’t an accident. The officer’s deadly actions attempted to take a person’s life in broad daylight. Like many of you, the video is burned into my mind like all the past videos just like it. The irony is not lost on me that as Jacob Blake was trying to deescalate a fight in his community, the responding officer didn’t feel the need to do the same – and now we all know Jacob Blake’s name.” (Actually, Blake escalated the situation with officers by resisting arrest).

He also implied that Blake’s shooting was the result of white supremacy and systemic racism (for which there is literally no evidence). He said the system was perpetuating “systemic violence” and said communities are “overpoliced” and “children learn early on that police officers aren’t always serving and protecting them as they should.”

When the facts came in and the (Democratic) district attorney cleared the officer, ruling the shooting justified, did Barnes clarify, retract or apologize for his reckless rhetoric? Nope. He doubled down, tweeting, “I wish I could say that I’m shocked. It’s another instance in a string of misapplications of justice. It keeps happening, and there’s always a new excuse. The non-prosecuting DAs are as negligent as the officers in these situations. What is video evidence anyway if they just watch it and interpret things other than reality? Police accountability is one thing, but there’s a much deeper failure that allows a person to see the footage and ultimately determine nothing went wrong.”

He actually wrote in a statement that “to see a city burn on the outside is devastating but hardly compares to the implosion brought by systemic inequity and injustice.”

I wish I could say that I’m shocked. It’s another instance in a string of misapplications of justice. It keeps happening, and there’s always a new excuse. The non-prosecuting DAs are as negligent as the officers in these situations. https://t.co/kJsXLzaqda

He never explained why he thinks DA Mike Graveley got it wrong (and retired Police Chief Noble Wray, who conducted his own investigation) since they relied on the TOTALITY of evidence as the law requires not the snippet of video that Barnes fixates on. Just more reckless rhetoric from a person who should know better. We actually watched Graveley’s presentation and listened to the facts, and it’s clear that the officer was justified to shoot Blake, who had a knife, who resisted arrest, who was accused of sexual assault, and who was about to flee with kids in the car.

What are the actual facts? Officer Rusten Sheskey said that Blake twisted toward him with a knife. He and another officer made a failed attempt to tase Blake, who was wanted on a warrant. Blake’s children were in the car. Blake admitted having a knife, the DOJ says. The officer repeatedly ordered Blake to drop the knife, but he did not comply. Blake continued to fight with the officers and at one point put an officer in a headlock. Blake had a felony arrest warrant for a domestic violence incident that included a charge of third-degree sexual assault (the latter charge was later reduced in a plea deal).

The DOJ investigation revealed: During the investigation following the initial incident, Mr. Blake admitted that he had a knife in his possession. DCI agents recovered a knife from the driver’s side floorboard of Mr. Blake’s vehicle. A search of the vehicle located no additional weapons.

2. Lying to the Public About Whether He Had a College Degree

According to the Milwaukee Journal Sentinel, in 2019, Barnes “told the public months ago he finished college and received a degree but now says he didn’t graduate.”

In other words, he lied.

The newspaper reported that he lied to the Journal Sentinel, saying he “finished” college, lied in a candidate questionnaire that he had a bachelor’s degree, and lied to the Capital Times in a podcast.

A staffer blamed another staffer. In 2020, he finally got a degree.

3. Leaving an Interview When Asked About His Delinquent Property Taxes

Last week, @DanielBice reported that Lt Gov Mandela Barnes (D-WI) failed to pay $2,225 in 2018 property taxes, interest & penalties to Milwaukee. Imagine how much more that would have been had GOP not held property taxes down for past 8 years?

In 2019, the Milwaukee Journal Sentinel reported that Barnes “walked out of an interview with a reporter for WITI-TV (Channel 6) when asked about his delinquent property taxes on his Milwaukee condo.”

The Journal Sentinel reported that Barnes was “listed as being delinquent on his 2018 tax bill of $2,225. He also has not paid the $70 balance on his 2017 taxes.” Barnes and Tony Evers said the check was in the mail.

4. Being a Parking Ticket Scofflaw

In 2019, in another story on Barnes, the Journal Sentinel reported, “…a judge ruled last year that Barnes couldn’t get the registration on his own car renewed until he paid a $108 fine for several outstanding parking tickets.”

He was being driven around by a State Patrol protection unit on the taxpayer dime because his registration was not renewed.