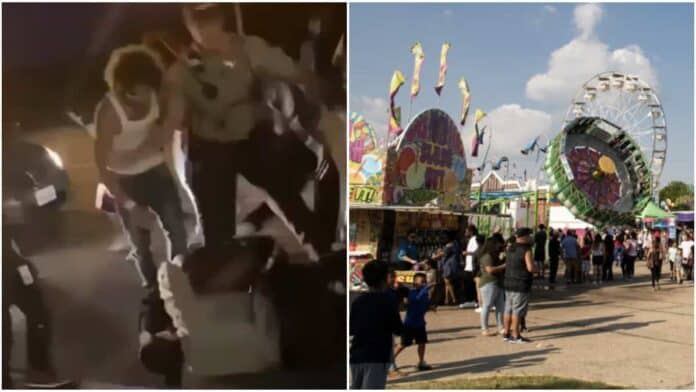 Dane County Fair fights wrecked the evening, but there were no arrests.

The Dane County Fair is closing early at 7:30 p.m. and will require juveniles to be accompanied by an adult after a Friday night marred by a series of fights among juveniles in which a sheriff’s deputy was hit in the face. But no arrests were made, and the decision to combat the violence and disorder by wrecking the fair for law-abiding people isn’t sitting well with fairgoers who are venting about the decision on social media.

The Alliant Energy Center wrote on Twitter that it “will enforce a new admissions policy today and Sunday for the Dane County Fair. All those under the age of 18 must be accompanied by an adult to gain entry, and the fair will close at 7 p.m. UPDATE: Admission to the Dane County Fair will now close at 7:30 p.m. The midway will also close at the same time.”

A woman posted the following video of one of the Dane County Fair fights to Facebook, writing, “Yep, I was there with my kids, I bought them $30 unlimited wrist bands so they can enjoy the rides til close but guess not.”

YouTube age-restricted the video so you have to click here or through the video below to YT to watch it.

We reached a witness, Kurt Stapleton, who told Wisconsin Right Now, “My wife and I were at the fair in Friday night, our son was playing in the fun house. It was 8:50 pm. All of a sudden we hear a bunch of people yelling and running and as soon as we looked to our left kids/teens were running towards us at all directions and heading towards the gap in between the two kids fun house rides where it was dark and secluded. There were about 50-70 of them. About 1 minute later they go running and walking in different directions trying to be quiet and cautious. We grabbed our son and headed out knowing what was going on and about to happen. A few moments later they all started running again to a different location in the fair closer to the hotel on Rimrock. We left immediately after that.”

A man wrote on Facebook, “Good luck to anyone living in Madison because it’s turning into Milwaukee and there’s no stopping it.” A woman wrote, “Why is society punished for the offenders’ actions? Is this the fair’s fault? The innocent people’s fault? Why not just eliminate the fair and we don’t have to worry about the offenders anymore 🙄🙄 I bet the offenders get a slap on the wrist. Does this really make sense??”

Many angry people expressed their upset. “Typical. Punish the innocent. Lock up the offenders. Make it a mandatory month in juvenile jail for fighting at a public event. Let people who are law abiding enjoy life,” wrote one. “Madison is getting out of control. What Madison needs to do is hold the parents accountable for what there children do and maybe then they parents will try to control children better when they go out into the public,” wrote another. A man wrote, “When the criminals are protected, the public is not. The public loses again.”

The Center downplayed the violence by writing that it occurred in the parking lot and that there were no injuries (the no injury claim was contradicted by the Sheriff’s Department), adding, “The changes are due to a confrontation Friday that resulted in no injuries. The incident, a fight in a parking lot, was quickly mitigated. No injuries were reported. The Alliant Energy Center is taking appropriate steps to ensure the safety of the public as events return to the facilities.”

The fair is located in the Town of Madison, which is going to be annexed next year by the City.

However, people who were at the fair described a more raucous scene on social media than simply a lone fight in a parking lot. The Dane County Sheriff’s Department later also said in a news release that there were several fights involving juveniles on Friday night between 7 p.m. and 10 p.m. They resulted in a deputy being hit in the face and minor injuries. The deputy was struck while trying to break up a fight. There were no arrests, however, which was not explained.

“The Dane County Fair has historically been a fun family-friendly event,” said Sheriff Kalvin Barrett in a news release. “The Sheriff’s Office will do all that we can to keep this an enjoyable and safe environment for families.” Law enforcement presence is being increased.

Madison.com quoted a sheriff’s official as saying that “deputies responded to multiple physical and verbal altercations between a crowd of minors gathered in the Alliant Center parking lot starting about 7 p.m. Friday. At 9:30 p.m., deputies and fair security began to break up a crowd of more than 50 people…Both city and town police were called in for assistance. The fights resulted in no arrests and no serious injures, though a deputy was struck in the face.”

Stapleton wrote on Facebook: “We saw this whole thing happening. Tons of kids started running towards the fun house where it’s dark and secluded. Then they dispersed and were running in different directions. We decided to leave right after that. GOOD JOB KIDS. HOPE IT WAS WORTH IT.”

He added, “We were there for over 4 hours and witnessed it happen twice. And then left promptly before anything else happened.” To another social media user, he added, “Did 100 kids run past you and your family in the carnival almost knocking you over as they ran to watch a fight behind the fun house? Where your son was playing? I was. I saw no adults running. Kids, teens. That’s it.”

However, he told us, “I was more concerned about getting my son off that ride and out of there. As far as not making any arrests, that’s fine. I like the idea of having a curfew but not that early. The fight took place after the sun went down. I think shutting down at 9pm would be good. Having the live music area open for adults to enjoy the music, having some security there might help. Or possibly even hiring more security guards to be out in the crowds watching for anything suspicious and they can report directly to the officers that are there.”

A woman wrote on Facebook, “We also were leaving at the time that there were a lot of young kids running toward the gates. And as we were pulling out of the parking lot we heard the sirens and then eventually saw at least 10 squad cars pull into the fair grounds, it really made me and my girlfriend very uncomfortable.”

Another woman said, “I saw the fight start down in the midway. last night. 2-3 kids started beating the crap out of a smaller kid. A big group standing around recording incident. Then the big group all started running through the Midway.”

A second woman added, “I was standing by this ride when the fight broke out. 2-3 bigger boys stared beating the crap out of a smaller kid. About 15-20 others standing around watching with their phone of taping it. All of a sudden the big group all took off running through the Midway. Sad a few have to ruin it for everyone else.”

People expressed anger at the early closing time on Facebook:

“And they ruined just not for families wanting to have fun..but ruined it for the food vendors that couldn’t go anywhere last year and are trying to make what sales they can..now they have lost 4 hours of income,” wrote one.

“There is no point to a fair that closes at 7. The whole point of the rides is to be able to see them light up in the dark. Plus, these are the prime money making times for the company if I was them I would have pitched a fit,” wrote another.

“They do this because there is NO CONSEQUENCE in the justice system or at home. There IS a solution but, society isn’t there yet,” concluded another Twitter user.

“I use to show animals for 4H at Dane County fair years and years ago when it was geared more towards agriculture and 4H . (I’m old now lol) and it was so much fun, never felt threatened. Some of my best summer memories growing up was hanging out with my friends and animals at the fair. I would love to take my kiddo (was going to Friday) but knew there are always fights in Madison at any event and this one would be no different. Thankfully I listened to my gut and decided to skip the fair,” a woman wrote on Facebook.