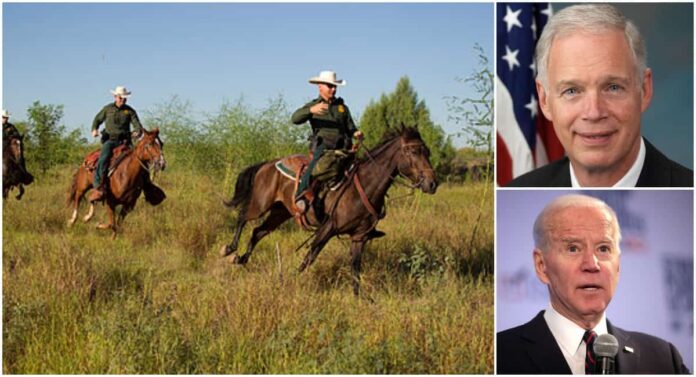 “I’ve never seen them whip anyone. He was swinging it, but it can be misconstrued when you’re looking at the picture.” – Photographer Paul Ratje

“Biden is disgraceful. Instead of maintaining the policies that worked and giving Border Patrol the resources they need to deal with the humanitarian and national security crisis he created, he is blaming them for a fake controversy created by the radical left and complicit media,” Johnson tweeted.

“The men and women of Border Patrol working tirelessly to handle Biden’s border crisis deserve so much better,” he tweeted.

Biden is disgraceful. Instead of maintaining the policies that worked and giving Border Patrol the resources they need to deal with the humanitarian and national security crisis he created, he is blaming them for a fake controversy created by the radical left and complicit media.

Johnson’s comments came after Biden prejudged Border Patrol agents caught in a viral photo, saying, “It’s outrageous. I promise you those people will pay. They will be investigated. There will be consequences.” That’s even though it later turned out that the border patrol agents were not holding whips, as some claimed, but were really holding the reins of their horses.

For all you Twitter warriors out there: these are NOT whips. And no, Border Patrol agents are NOT "whipping" people.

They are REINS… Stay with us here, like a steering wheel is used to drive a car, the reins are used to “drive” the horse.

Thanks for coming to our TED talk. pic.twitter.com/r0n2kXHqvy

Biden said, “To see people treated like they did? Horses running them over? People being strapped? It’s outrageous. I promise you, those people will pay.”

Biden on the lie that border patrol were using whips on illegal immigrants at the border:

"To see people treated like they did? Horses running them over? People being strapped? It's outrageous. I promise you, those people will pay." pic.twitter.com/Jx79KoYTy9

But the photographer who took the pictures, Paul Ratje, told KTSM-TV, “I’ve never seen them whip anyone. He was swinging it, but it can be misconstrued when you’re looking at the picture.” He said that some of the Haitian men “started running, trying to go around the horses.”

Border Patrol Local 2366 President Jon Anfinsen, which represents Del Rio said to journalist Julio Rosas: “How can President Biden continue with this false narrative when the photographer who took the photos of the horse patrol unit has already said nobody was whipped? What happened to due process?”

According to CNBC, Border Patrol Chief Raul Ortiz said “the agents were wielding reins to control their horses.”

According to USA Today, border patrol agents have used horses in Texas since 1904 and the horses are considered helpful to this day when traversing difficult terrain not easily accessibly by motorized vehicles.

“Authorized Officers/Agents may use ‘objectively reasonable’ force only when it is necessary to carry out their law enforcement duties,” according to the use of force policy for the agency.

“The critical piece of this if somebody gets close enough to control the horse’s head by grabbing the reins or the harness on the horse’s head, he now has control of the horse, and that can lead to serious injury or death to the agent or to the migrant,” said Self, to the newspaper. “Everything I see on this is appropriate.”

Gov. Greg Abbott also criticized Biden, tweeting, “Because the Biden administration is doing nothing to secure our border, it has been the state of Texas that has had to step up and address this challenge.” Meanwhile, some of the most prominent critics of the Border Patrol agents were Democrats Ilhan Omar and Alexandria Ocasio-Cortez.

“It doesn’t matter if a Democrat or Republican is President, our immigration system is designed for cruelty towards and dehumanization of immigrants,” Ocasio-Cortez. “Immigration should not be a crime, and its criminalization is a relatively recent invention. This is a stain on our country.”

Sen. John Cornyn also roasted Biden in a scathing tweet, writing, “The White House is using a single encounter at the Texas border to scapegoat law enforcement and deflect criticism from its immigration failure.”
Biden’s spokeswoman labeled the images of the Border Patrol agents “horrific.”

But what did they really show? One showed a border patrol agent reaching for a migrant by his shirt.

The Biden administration has now suspended the use of horses by Border Patrol agents at the border.

The Haitian immigrants have crowded into a border camp, with some being deported. That led U.S. special envoy for Haiti Daniel Foote to resign, saying he “will not be associated with the United States’ inhumane, counterproductive decision to deport thousands of Haitian refugees and illegal immigrants to Haiti,” NPR reported.