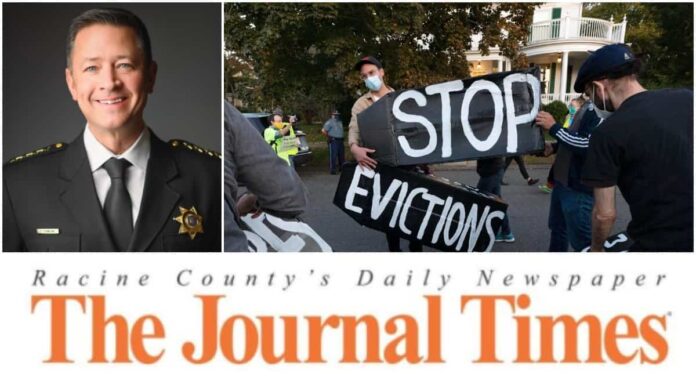 The Sheriff’s Department asked the Racine Journal-Times, “Is it that your reporters are unintelligent, biased, partisan . . . or a dangerous combination of the mix?”

The Racine County Sheriff’s Department is accusing the Racine Journal Times of making false statements and engaging in “unethical conduct.” The controversy emerged about reporting into the Department’s enforcement of a federal eviction moratorium.

In a lengthy smack-down posted to Facebook, the Sheriff’s Department wrote: “In no way shape or form did the Sheriff’s Office take any of the positions described by Racine Journal Times employee Scott Williams (as thoroughly explained below). The Sheriff’s Office reasserts their previous question to the Racine Journal Times that it directed at Adam Rogan – Is it that your reporters are unintelligent, biased, partisan . . . or a dangerous combination of the mix?” (Rogan is a local editor at the newspaper).

People responded favorably on the Department’s Facebook thread. “Good for you Sheriff! The media should be called out for trying twist the story to make y’all look bad,” wrote one woman. “Thank you for standing your ground and doing the right thing as always. The Journal Times is a ‘left leaning’ paper that always seems to tell a story their way without any ramifications until now. Thank you,” wrote another.

We’ve reached out to Rogan and Williams to see if they want to comment.

“On today’s date, August 6, 2021, the Racine Journal Times continued with (their) unfounded, unethical, and unprofessional comments when Scott Williams wrote an article entitled, ‘Racine elected officers urge sheriff to comply with federal eviction moratorium,’ and stated: ‘One day after the moratorium was announced, the Racine County Sheriff’s Office on Wednesday said it not abide by the moratorium and would follow through with any evictions that are requested in the county,'” the Sheriff’s Department wrote in a lengthy statement posted to its Facebook page.

“In a written statement, the heriff’s statement also asserted that a federal order prohibiting landlords from carrying out evictions constitutes an action to ‘take away property.'”

This was followed by a lengthy statement called, “SHERIFF SCHMALING IS COMPLETELY COMMITTED TO UPHOLDING THE LAW.”

This was the Racine Sheriff’s statement in full:

The statement then contained a section called, “Setting the record straight.” It reads:

As stated below and thoroughly explained, Adam Rogan of the Racine Journal Times appears to not know the definition of the word ‘despite.’ The word ‘despite’ means without being affected by; in spite of; notwithstanding; regardless of. The Sheriff’s Office did not state they would act regardless of the eviction moratorium order. Instead, the Sheriff’s Office stated it would act consistent with the moratorium order.

If a judge decides the moratorium order applies to a case, nothing happens. If a judge decides the moratorium order does not apply to the case and issues a Writ of Restitution, the Sheriff’s Office will follow that lawful order. So, the question needs to be asked: Is Adam Rogan acting unintelligently or is he unethically attempting to create a controversy where none exists?

• “The Racine County Sheriff’s Department has stated that they will continue to carry out evictions if orders are approved by a judge” – Yes, that is how the law works!
• “We hope and expect that Racine’s Circuit Court judges and law enforcement agencies will abide by the order, which carries the force of law, and honor the federal eviction moratorium for any and all residents who qualify for protection.” — Yes, we will! But have you read the order? Do you know how the order works? Do you know that people may not be eligible for the order? Do you know that there are exceptions to the order?

By stating the eviction moratorium would prevent “many” evictions, you are acknowledging that evictions will still occur. How do you propose the Sheriff’s Office respond to these legal orders by a judge?

This is why Sgt. Luell ended his initial response to Adam Rogan’s question with this statement: “However, if our Civil Process Unit receives a Writ of Restitution from a Racine County Judge to commence an eviction, the deputies will follow the appropriate procedures and conduct the eviction.”

The position of the Sheriff’s Office is correct and legal. The people mentioned in this response should think about their positions more carefully, do their homework, and consider why they took their respective positions. Are they attempting to create a controversy?

Under a section called “Evictions,” the Sheriff’s Department wrote:

“Evictions are a legal decision conducted by a duly elected judge in the court of law. The Sheriff’s Office has no power to decide who is, or is not, evicted. The eviction process starts by a landlord initiating a lawsuit against a tenant. The landlord has the burden of production, and the tenant may respond to the allegations and defend their position of why they should not be evicted. Currently, tenants have the additional argument or defense of the eviction moratorium. Ultimately, the judge makes the legal decision of whether a tenant should be evicted.

In a section titled “Background,” the Department wrote:

“On September 11, 2020, the Racine Journal Times published a story entitled, ‘More relief for renters; CDC eviction stay through Dec. 31.’ In this article, the issues surrounding tenants facing evictions was discussed, as-well-as the moratorium on some of these evictions. It was explained that to qualify for the moratorium, tenants would have to sign a declaration stating:
• They have tried to get government help for rent or housing
• They have earned less than $99,000 in 2020 ($198,000 for joint filers); Or they did not have to file taxes in 2019; or they received a CARES stimulus check
• They cannot pay due to lost income, a layoff or medical expenses
• They are trying to make partial payments
• If they are evicted, they will likely become homeless, use a homeless shelter or move into a place with others in close contact

Furthermore, in this article, Racine County Judge Gasiorkiewicz stated that he met with Sheriff Chrisopher Schmaling and District 2 Chief Justice Jason A. Rossell to ‘talk about how the moratorium would be handled.’ It was agreed that tenants would be given the opportunity to fill out the declaration and have future court proceedings.

Therefore, the Racine Journal Times should have known how evictions work; how the eviction moratorium affects evictions; and the fact that evictions were still occurring for approximately the last 11 months.

On August 3, 2021, the Centers for Disease Control issued its own eviction moratorium order. This order is nearly identical to the previous moratorium in that a tenant has an obligation to sign a declaration and go to court to see if they qualify for the eviction moratorium. Furthermore, there are exceptions to the moratorium (as listed in Adam Rogan’s August 4, 2021, article):
• Criminal activity occurs on the premises
• Property damage
• Other contractual obligations are broken

“Hello all,
Sorry for including so many of you on the email, but I wasn’t sure who the best point of contact would be: Can you see if part/all/none of Racine County is to be included in the federal partial eviction moratorium to be put in place by the Biden administration? If yes, can you say what parts of Racine County will be included? Any insights on this, and enforcement of this tricky issue, would be appreciated. Reach me at [email protected] or anytime on my cell at 262-XXX-XXXX.”

On August 4, 2021, the Public Information Officer for the Sheriff’s Office, Sgt. Michael J. Luell, responded to Adam Rogan’s questions with the following response:

The order sets up a procedure for a tenant to be categorized as a ‘Covered person.’ The order stated that there is $46 billion available for renter’s assistance, and three-quarters of that money is still available to ‘help pay rent and rental arrears.’ It should be noted that reports are that only $3 billion has been used. The order stated that ‘many states and localities are still ramping up the collection and processing of applications and the delivery of assistance and putting in place other eviction prevention strategies.’

This order, which can place United States citizens in jail and/or take away their property, was bestowed upon the American people by the unelected Director of the CDC, Rochelle P. Walensky, after the duly elected United States Congress decided not to extend the moratorium; after the White House acknowledged they did not have the legal authority to extend the moratorium; but prior to President Biden acknowledging this extension may not be constitutional.

As for how this order will affect Racine County, we do not know if Racine County will experience ‘substantial’ rates or ‘high’ rates of community transmission levels of SARS-CoV-2. However, if our Civil Process Unit receives a Writ of Restitution from a Racine County Judge to commence an eviction, the deputies will follow the appropriate procedures and conduct the eviction.

“On August 4, 2021, Adam Rogan, of the Racine Journal Times, “wrote an article entitled, “Update: Racine County Sheriff’s Office says it will carry out evictions if ordered, despite CDC moratorium” (Emphasis added). In the article, Adam Rogan wrote, “However, citing how the CDC is led by ‘unelected’ government officials, the Racine County Sheriff’s Office says that it will carry out evictions if called upon, despite the federal order.” (Emphasis added),” the Sheriff’s statement says, adding,  “It is a false statement to imply that the Sheriff’s Office will act ‘despite’ the eviction moratorium because the CDC director is unelected.”

“MICHAEL – Attached is a statement from the Racine mayor and others regarding the sheriff’s position on the federal eviction moratorium. Can you please let me know if the sheriff is available to offer a comment and/or to answer questions?”

In Representative Neubauer’s release, the following is stated:

“The Racine County Sheriff’s Department has stated that they will continue to carry out evictions if orders are approved by a judge. We hope and expect that Racine’s Circuit Court judges and law enforcement agencies will abide by the order, which carries the force of law, and honor the federal eviction moratorium for any and all residents who qualify for protection.”